e.g. For an icosahedron defined as follows: 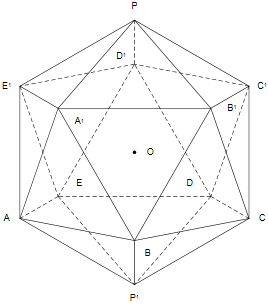 We define position and orientation w.r.t. this body's frame of reference as follows:

Is there (a) a formal way to index/order the faces of a regular polyhedron?  In other words, are some methods of ordering the faces/vertices etc., more correct, logical or conventional than certain other methods?  If not, then do certain face encodings/orderings facilitate more efficient vector manipulation?  How then should the faces be ordered, or, in what order should we generate their normal direction vectors?
OR, is it (b) a matter of arbitrary discretion according to the requirements of the specific application one is designing for; or otherwise arbitrary due to fundamental constraints on the shape of the data structures & algorithms required to manipulate these data most efficiently?

Suppose we break each surface triangle down recursively into four sub-triangles so that:

Is there (a) a formal mathematical way to order or encode these constituent sub-triangles?
Or is this (b) open to the engineer's discretion, to define a convention that he prefers?
Do some encodings of the constituent triangles permit more efficient data manipulation, or is this choice arbitrary?  Can this be proven either way?  If the choice is theoretically arbitrary, then does a relevant mathematical convention already exist?

We will use this for data geocoding, indexing, querying & visualisation; using polyhedral projections from near-spherical shapes (the surface of the Earth) with the best all-round properties of:

Our general purposes are illustrated by this document:

We will orient our icosahedral mapping so that:

For modelling or display purposes, the model polyhedron should be scaled such that its volume is equivalent to the modelled geoid.  Where the geoid is irregular and the modelling polyhedron is of high resolution, approximations to this rule might be considered acceptable.

Unless advised of a better way, we plan to order the faces first according to their apex orientation with triangle base perpendicular to (P→P1), whether up/down with respect to vector (P→P1); and second (for each orientation) in a spiral/helix, working first anticlockwise around (P→P1), and then clockwise around (P1→P) for the opposite apex orientation.  This would number the 20 main triangles from 0 to 4, 8 to 12, 16 to 20 and 24 to 28 as follows:

— This coding system has discontinuities to simplify logical functions for calculating surface polygon orientation, which is necessary for translating position data between systems of coordinates (orientation might be considered on the basis of individual triangles, or cumulatively on the basis of recursive N-ary sum style positional calculations).  Note that the rows in this table correspond to horizontally oriented slices of the icosahedron, whereas the columns in this table correspond to diagonally (near-vertically) oriented half-slices.

We plan to encode each sub-triangle recursively as per:

We plan to support data compression and adaptive rendering by storing at each detail level only the differences from the average values corresponding to the hierarchical parent surface.  In accordance with this objective, location codes will be stored and communicated in a big-endian format.  If modelling a perfect unit sphere, the “unit sphere” should be of unit radius.  The volume of the unit spheroid/geoid etc. should generally approach 4π/3 cubic units as closely as possible (altitudes should be defined in proportion with such a unit geoid, and a scale factor should be specified for the entire geoid).

To promote industrial standardisation; I now release these plans freely here, and will further consider releasing my work freely when complete as a set of open-source software libraries.  For the record, I (Matthew Slyman) started working independently on this project some time around the year 1993, and first proposed this idea to Iestyn Bleasdale-Shepherd late in 1996 (he implemented the first proof-of-concept as an IBM PC program written in C over the Christmas holidays of 1996–1997).  We subsequently shelved the original application we were discussing; and as the originator of this idea and the sole developer of this specification, I (Matthew Slyman) hereby relinquish any claim to the intellectual property rights for this data structure or any compatible code implementations that might be created by third parties.  In order to better serve the mathematical community, I would like to give priority at the design/implementation stage to any relevant formal mathematical requirements or conventions.  Anyone commenting on this thread thereby places their comments likewise in the public domain, for general community benefit.  In the absence of further instruction, we will number the faces according to our practical requirements or whims (see above).  We would be grateful for any formal improvements that can be offered by anyone better educated in mathematics.

I propose to give this standardised set of conventions a name: “Icosamap”.  Please register any objections to this name, including links to any evidence of priority within the relevant field of science.

I am also interested in knowing if there are any good reasons to pick one ordering of polygons over some other ordering.

I'll post what little I know, but I'm really hoping someone else will post something much better.

All three are examples of geodesic grids.

Ordering polygons on a polyhedron

"What is the best way to pixelize a sphere?" by Max Tegmark

gives a format that appears extremely similar to your proposal:

Tegmark starts with an icosahedron, just as you do, and recursively subdivides it, just as you do. So I find it hard to believe that his method is "computationally and geometrically far more complex than what [you] are proposing" or that it has significantly "greater distortion in either area or geometry".

Given some specified resolution (the same as your depth of recursion) and some point on a sphere, Tegmark's system assigns that point to a "pixel number" (the number indicating what major icosahedral face it is on, and which particular minor sub-triangle on that face that point is in).

Tegmark mentions that "it is clearly desirable to use as small faces as possible".

Subdividing each face of a (30-faced) rhombic triacontahedron into two nearly-equilateral isosceles triangles gives the (60-faced) pentakis dodecahedron, as you mentioned, which one might expect to give less error than starting with a (20-faced) icosahedron.

Further subdividing each of those faces into two irregular triangles gives the (120-faced) disdyakis triacontahedron (dual to the truncated icosidodecahedron).

I've been told that the strictly convex polyhedron with the maximum number of identical faces (exactly equal-shaped and exactly equal-area) is that disdyakis triacontahedron.

However, apparently none of these shapes gives any improvement over your icosahedron proposal. Tegmark's code immediately breaks up each equilateral triangle of the 20-sided icosahedron into 6 identical irregular triangles. The resulting 20*6 = 120 identical triangles are the same triangles as the faces of the disdyakis triacontahedron, right?

The Maidenhead Locator System uses a system similar to the Morton code. You might also want to look at the military grid reference system.

Other ways of ordering such subdivided square (i.e., drawing a path that hits the center of each square exactly once) include the Sierpiński curve, the Hilbert curve, the Peano curve, the Moore curve, etc.

There exist other space-filling curves based on recursively subdividing a triangle -- each division of 4 by area adding 2 more bits of localization area. (Do any of them have popular names?)

There are 2 popular ways of subdividing squares and triangles: ( a, b )

"Class II"/"triacon" method, employed on almost every major geodesic dome project in the 1950s ( a p. 30 ), each of the original triangles is replaced with 3*n^2 triangles. The small triangles have edges (very close to) right angles to the original big triangles. (Unreliable sources tell me the triacon method can be applied to the cube or rhombic solids, each of the original squares or rhombuses is replaced with 2*n^2 rhombuses). (n=1 converts the icosahedron to the pentakis dodecahedron I mentioned earlier; n=8 converts the icosahedron to an approximation of the Epcot "Spaceship Earth"; n=1 converts the cube into the rhombic dodecahedron, etc.).

Not the answer you're looking for? Browse other questions tagged geometry polyhedra or ask your own question.

0
Find Point on Polyhedron Nearest Given Point
4
Asymptotic bounds on the number of faces needed to construct a polyhedron of a certain genus
1
How do I find a reduced set of faces required to check for intersection, to determine if two convex polyhedra intersect?
0
Volume of a polyhedron from the surface normal vectors.