Since every open set can be expresses as a countable union of open balls you don't have to deal with intersection of the closure of an open set $\Omega$ with balls.

To show that u satisfies the Laplacian, we use Green's 1st identity to obtain the inside-outside theorem equality, setting another arbitrary function, v, contained in the same space as u.

Then, we set v = 1 and obtain an new (simplified) expression of Green's first identity. Hence, for an arbitrary circle B lying in Ω closure, with the compatibility condition = 0, then the integral of the Laplacian = 0. Thus, it follows that the Laplacian = 0 and so the second condition of u being harmonic in Ω is satisfied. 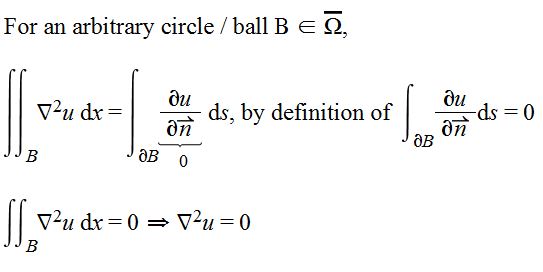 Not the answer you're looking for? Browse other questions tagged multivariable-calculus partial-differential-equations harmonic-analysis harmonic-functions or ask your own question.

8
Union of a countable collection of open balls