How many passwords can be formed from this maze?

We are all familiar with the $9$-dotted maze lock screen password that we get in all mobiles phones today.Now if minimum of $3$ consecutive dots can be joined to form a password total how many passwords can be formed?

Now, I suspect this is wrong as when I write $9\choose3$,I choose any 3 dots among the $9$ dots that appear but this can't be as only $3$ consecutive dots can be chosen but here,we are not doing it.

So, what is the correct method to do it?

So,total how many passwords can be formed?

Thanks for any help!! 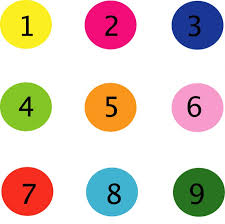 Ok my friends I've solved it by a Brute Force algorithm, I'm so happy I managed it. The script I made is in R, so if you want to test it at home you need to install that statistical program.

The main idea of the algorithm is that I just walk through all possibilities that are possible. At every new move (level) I evaluate the coordinates of the neighbors. When I reach maximum depth or the desired length of the password I add 1 to the total of possibilities and move one level up and get the coordinate of the new neighbor.

I made a YouTube video of the script so you can see what it is doing: https://www.youtube.com/watch?v=6uOWSM3N7u8

So for the password lengths I calculated the following number of possibilities:

Note that the number of possibilities tends to decline with larger lengths of passwords. This is because there are more restrictions as some moves lead to "dead-ends" and thus not reaching max_level.

We can also see that all outcomes are divisible by 4 (except for max_level=1). This was something I noticed when calculating manually in my first post. The possibilities are divisible by 4 for length > 1, because there are 4 corners and 4 sides. This means that there are 4 symmetric paths from a corner, 4 symmetric paths from a side. If length > 1 than from the middle you will be forced into either a corner or side, meaning that again there are 4 symmetrical paths. This symmetry could be used to speed up the algorithm and just calculate one of the 4 paths and afterwards multiply by 4.

Ok so there you go, implementing "knight-jumps" will take some extra effort but will also be doable. Then you can also calculate for the real-life thing where these swipes are allowed.

If you want to check out or use the code, go here: https://github.com/sjorsvanheuveln/Android_Lock_Combinations

I think there's a possibility to find some order in this mess, but it's not that easy. The easiest solution seem to be to write a program that enumerates and count the passwords, but a manual solution is certainly within reach.

First of all we can prove that every center-avoiding sequence can be contained in a minimal sector with angle between $0$ and $7\pi/8$. This is because the argument around the $5$ varies continuously and the argument will have a minimum and a maximum and we can't have them $2\pi$ apart or more. We can't have $2\pi$ because that would mean that it will cross the same digit at the minimum and maximum. It can't be larger because that would mean that between the maximum and minimum there will be an edge that it will have to pass round both the maximum and minimum.

Next fact is that the direction (clockwise/anti-clockwise) can not change arbitrarily. In fact it can only change near either of the ends of the chain. We can see this because if it's to change direction it must return to an argument that has been skipped on the way to the endpoint and the only possibilities are the corner which are surrounded by two edges and it must have come from one of them, turning at the other and then it's locked into the corner.

Third is that given that the chain doesn't change direction, the chain is uniquely determined by the minimal sector containing it, the corners that are skipped and the direction taken.

Fourth if the chain changes direction at either end the minimal sector has to end on an edge at that end and the nearest corner in the sector cannot be skipped. Otherwise any corner can be skipped in the sector.

Now we're ready to catalogize the chains and count them. We will categorize them by the kind of minimal sector they are in together with the number of corners that are skipped and whether they turn at the ends (not taking into account that they can take two direction for sectors of length larger than 1):

We then can sum up the rows to count all the chains of each type of sector:

For longer solutions we will run into next complication, when considering solution consisting of a chain of length longer than one followed by 5 and ending in a chain of length longer than one we will have to have that the minimal sector for the chains may not intersect - we cannot use the corners skipped by the other chain since we would get trapped then (we could for length one since that's not a problem then).

This method of solving this explains some of the observations made by other solutions:

The reason the number of passwords of length longer than one is divisible by four (in fact eight) follows because of the construction with center-avoiding chains (there are four or eight sectors of each kind and each sector contains chains determined by among other the general direction of the chain).

In that case there are only 7 decisions possible:

This gives a total of 160 possible passwords with 3 dots. Perhaps this is reducible to a formula, but I don't know how yet.

I used a similar method but a tree diagram

I have written Python code (Hopefully the Link Works) to answer this question. I have calculated the answer in two different ways and the answer I got agrees in both cases: $$10256$$ The first way is just a brute force depth first search on all keys, based on the adjacency graph of the keypad. The search only counts paths of length $3$ or more, i.e. depth $2$ or more. The second approach exploits symmetry, performing only the depth first search on one corner, one side (non-corner), and the centre. It then multiplies the corner and side results by $4$. If the code link doesn't work I can post the code here upon request. You may also be interested in these numbers:

I have cross checked my answer against that given by Ansjovis86 and it indeed checks out. Success! To be more explicit, summing up all paths of length $3$ or more from Ansjovis' answer we get:

Not the answer you're looking for? Browse other questions tagged combinatorics discrete-mathematics recreational-mathematics or ask your own question.