Linear Algebra: Identity matrix and its relation to eigenvalues and eigenvectors

Kindly help me understand this statement made by my prof.

"The identity matrix I has the property that any non zero vector V is an eigenvector of eigenvalue 1."

My assumption of this statement is that the column vector (1,1) multiplied by the identity matrix is equal to the identity matrix. But the confusing part is when he says "...any non zero..". This is implying we can use other values that don't equal one. I believe the eigenvalue would change in light of the different non-1 values.

From your question, it seems that you don't understand what eigenvectors are.

Here is my attempt to visualize an example for $Av = b$ in 2D space: 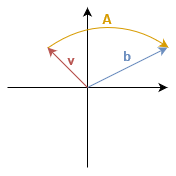 Given that $A$ is an arbitrary matrix, there can exist nonzero vectors such that when multiplied with $A$ they do not get rotated (only scaled). These vectors are eigenvectors. Therefore, we can write $\lambda v = b$ for every eigenvector $v$, where $\lambda$ is a scalar factor. We call $\lambda$ the eigenvalue.

In the following example, $A$ describes a reflection along the diagonal from bottom left to top right: 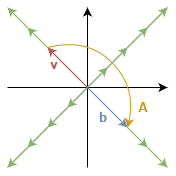 To answer the question

When you look at the matrix-vector multiplication with the identity matrix $Iv = v$, all vectors stay the same. In particular:

The identity matrix I has the property that any non-zero vector V is an eigenvector of eigenvalue 1.

Will Jagy's demonstration is correct. The reason for the "non-zero condition" is that for any matrix (linear function) :m, zero is a fixed point : m(o) = o, for any matrix:m.

Every vector is an eigenvector of the identity matrix

First remember that even in the simple case where we have distinct eigenvalues and eigenvectors, then eigenvectors are not unique because if $v$ is an eigenvector, then so is every $\lambda v$ on that line.

But even if we require normal eigenvectors, this is not enough for uniqueness, because a single eigenvalue can have two distinct eigenvectors. And when that happens, any linear combination of those two eigenvectors is also an eigenvector because:

So if for example there are two such distinct eigenvectors, then any value in that plane, and not a line, is also an eigenvector, so we could just rotate around those vectors and maintain normality with infinitely many choices.

Have a look at the concepts of:

and the key relationship:

So from this, we see that in the case of the identity matrix, there is a single eigenvalue of 1 with:

and therefore the entire space is an eigenvector.