The thing which you want to prove is not true. (Also it is not correctly formulated. If you write ordinal similar to the set of all functions from $b$ to $a$, you should also write some well-ordering for this set.)

If $a$, $b$ are ordinals then by $a^b$ we mean an ordinal, which is usually defined in the way you described in your question.

I don't think that there is some natural well-ordering on the set of all maps from $b$ to $a$ for ordinals $a$, $b$.

I am not sure to which extent it's useful here, but I'll add one possible graphical representation of $\omega^\omega$, since I've mentioned this ordinal a few times.

Imagine all finite sequences of non-negative integers ordered as in the picture: first from left to right (by the length) and in each column from bottom to top (lexicographically). The symbol $\varepsilon$ represents empty sequence, each point represents the sequence given by the path from root to this dot.

It should be at least clear that in the first column we have $\omega$, in the second column $\omega^2$ etc. (Since $\omega+\omega^2=\omega^2$, if we take all points up to second column, we get still $\omega^2$.) So clearly the ordinal in the picture is at least $\sup\{\omega^n; n<\omega\}$. If you think about it a little bit, you'll find out that this ordinal is the union of $\omega^n$'s, if $\omega^n$ is represented by the first $n$ columns. 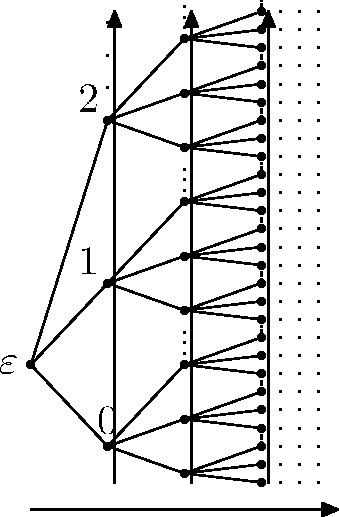 We will show by transfinite induction on $\beta$ that $E_{\alpha, \beta}$ is isomorphic to $\alpha^\beta$:

Not the answer you're looking for? Browse other questions tagged elementary-set-theory ordinals or ask your own question.