I'm trying to solve a problem where I have to create a DFA for the intersection of two languages.

I think I am on the right track, but not sure if it is totally correct. Could someone have a look please? 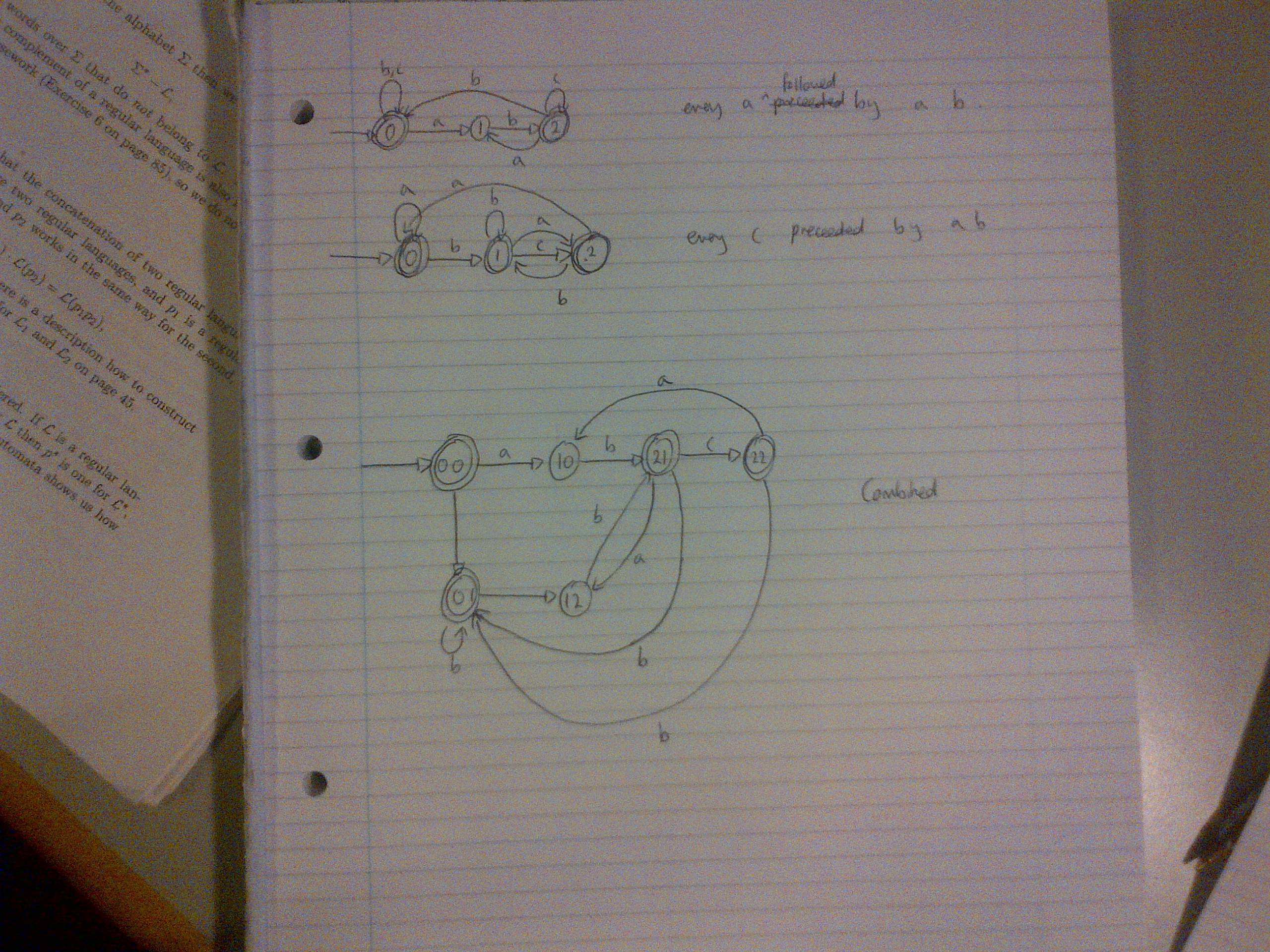 Please note, that such automaton usually is not minimal (e.g. the intersection might be just an empty language). Also it might be useful (but it is not necessary) to make input automatons minimal since the output is quadratic in size.

In first and second automaton, you can join states "0" and "2". The automata are correct, but not minimal.

sdcvvc has already noted some problems with your solution, and dtldarek has given a systematic approach to such problems. I’ll suggest how you could simply have built the desired DFA from scratch in this relatively simple case.

If you want to build the DFA from scratch, you want to make sure that every $a$ is immediately followed by a $b$ and every $c$ is immediately preceded by a $b$. At each state, therefore, you need to know two things: was the last input an $a$ (because then the next must be a $b$), and was the last input a $b$ (so that the next could be a $c$). This suggests that I should start with four states, say $s_0,s_a,s_b$, and $s_c$, with the idea that I’m in state

What transitions do I then need?

A note on the construction described by dtldarek: You should think of it as a way of making one DFA imitate two simultaneously. When you’re in state $s$ in the first automaton and state $t$ in the second, you’re in state $\langle s,t\rangle$ in the new one. The transitions in the new automaton mimic those of the first automaton in the way they treat the first state coordinate, and they mimic those of the second automaton in the way they treat the second state coordinate. It’s a very useful construction. Suppose that you have DFA’s that accept the languages $L_1$ and $L_2$. Depending on how you choose the acceptor states, you can use this construction to get a DFA accepting $L_1\cap L_2$ (as in this problem), a DFA accepting $L_1\cup L_2$, or a DFA accepting $L_1\setminus L_2$.

The easiest thing to do is to create a NFA that accepts the intersection of the two languages. I say easier, because we are allowed to use epsilon $\epsilon$ transitions. Then reduce the NFA to a DFA using something like the powerset construction:

Sometimes, when there are too many states its difficult to try to do it by hand directly.

Also, keep in mind the intersection simply means both automata have to accept the string.

Not the answer you're looking for? Browse other questions tagged computer-science automata formal-languages regular-language or ask your own question.

70
What are some mathematical topics that involve adding and multiplying pictures?
1
Creating a deterministic Finite state machine that accepts even 1s parity
0
Intersection of 2 deterministic finite state automata, but nondeterministically
1
How to construct NFAs that recognize the following languages.