There's a puzzle where you have 3 houses and 3 utilities. You must draw lines so that each house is connected to all three utilities, but the lines cannot overlap. However, I'm fairly sure that the puzzle is impossible. How is this proved?

As others have pointed out, you are trying to find a planar representation of the complete bipartite graph $K_{3,3}$ and while there are many proofs that this is not possible, there is one that I find particularly neat.

We will rely on the following results:

$^*$-Note for this problem you can actually check this for yourself by counting how many edges each cycle in $K_{3,3}$ has.

It's not hard to see this is impossible. Connect two houses to the three utilities, and you will essentially have a square with one diagonal drawn. The two corners joined are two of the houses, the other two corners and the midpoint of the diagonal are the utilities. (The actual shape may look distorted from this, but it is essentially this). 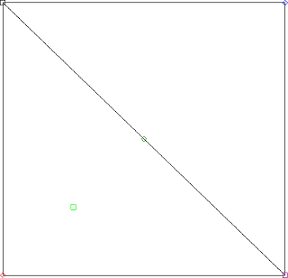 Postscript. As Aryabhata points out, I am implicitly using the Jordan curve theorem which says that a simple closed curve divides the plane into two disjoint regions, so that any path joining a point from the "outside" to a point "inside" has to cross the boundary. I use it when I argue that the house "outside" cannot be connected to the utility "inside" (without crossing the lines), or that you cannot go from one side of the diagonal to the other without crossing the diagonal.

In the language of Graph Theory, Graph $K_{3,3}$ is not a planar graph where $K_{m,n}$ is complete bipartite graph.

Also as stated, "Kuratowski proved in $1930$ that a graph is planar iff it does not contain within it any graph that is a graph expansion of the complete graph $K_5$ or $K_{3,3}$."

In the book Amusements in Mathematics [4] [9], Henry Ernest Dudeney noted:

“There are some half-dozen puzzles, as old as the hills, that are perpetually cropping up, and there is hardly a month in the year that does not bring inquiries as to their solution. Occasionally one of these, that one had thought was an extinct volcano, bursts into eruption in a surprising manner. I have received an extraordinary number of letters respecting the ancient puzzle that I have called ‘Water, Gas, and Electricity’”.

As this interesting problem − which may be succinctly re-stated as “Can a planar graph be constructed from each of three nodes (‘houses’) to each of three other nodes (‘utilities’)?” [8] − “cropped up” on this website too, it seems profitable to list some references on the topic.

In particular, in response to the request of an intuitive easy to grasp (and almost maths-free) ‘proof’ that the graph $K_{3,3}$ is nonplanar, I would suggest going through Chris Lomont’s An Elementary Proof That The Utilities Puzzle Is Impossible [6].

Being able to draw in the plane without edges crossing is the property of planar graphs.

In our case $|V| = 6$ (number of nodes) and we need $|E| = 9$ (number of edges). The graph we have cannot have any triangles, as it is bipartite, and any bipartite graph can only have even length cycles.

The above theorem can be proven using Euler's Formula very easily.

The graph you have is known as $K_{3,3}$ and appears in the statement of Kuratowski's Theorem on planar graphs. This theorem characterizes all planar graphs in terms on forbidding $K_5$ (complete graph on 5 vertices) and $K_{3,3}$ as minors.

This is a sketch as to why it is impossible which you may (or may not) be interested in:

If you are going to solve your proposed problem, most certainly you'd have to connect each house to electricity and water at some point. Imagine someone very clever proposes a solution to the problem, we only ask the person, "How did you connect the three houses to electricity and water?" If they did this successfully, we'll show them there is a problem with the internet.

Draw their partial solution on paper. The fact that the connections do not cross tell us that the paper is divided into 3 sections (each section has a boundary of four edges):

Note that a "section" may go all the way to the end of the paper (indeed one has to). These three sections cover the whole paper (if you include the connections, houses, water and electricity as well).

There are three houses A, B, and C, and three utilities (gas, electric, water) labelled X, Y , and Z. Suppose there is a solution drawn on a rubber sheet with curves connecting AX, AY , AZ, BX, BY,BZ, CX, CY , and CZ, none of which cross except at the endpoints: 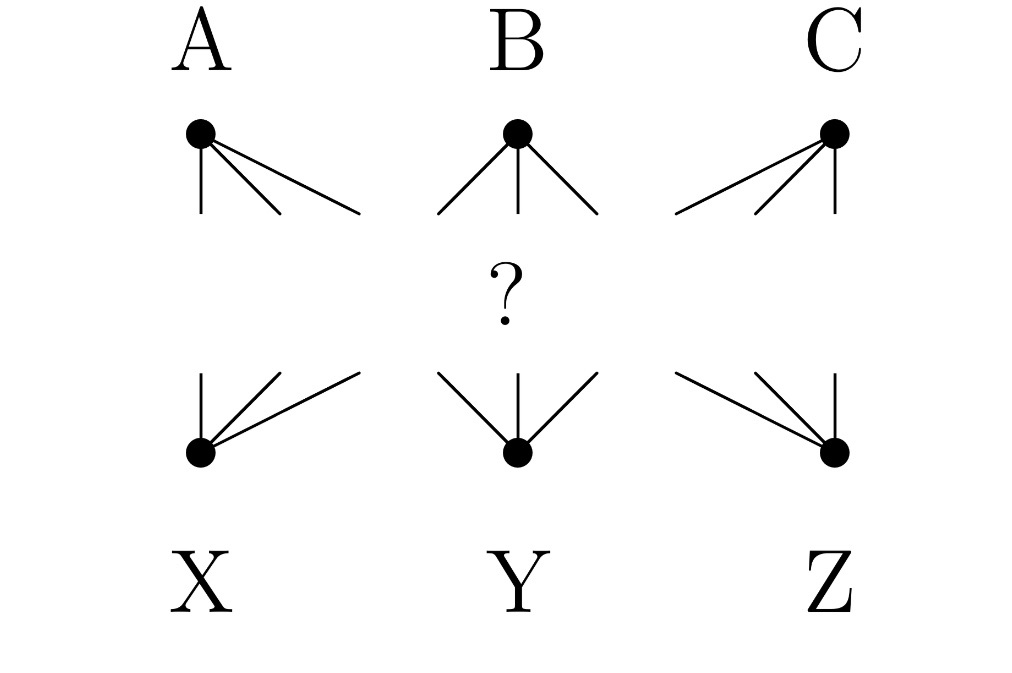 Then, just using B, X, Y , and Z, and the connecting curves BX, BY , and BZ, the rubber sheet can be stretched to give: 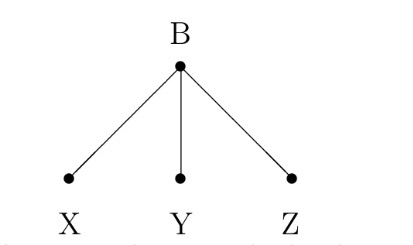 Then the rubber sheet can be stretched, placing the house C and the curve CY like: 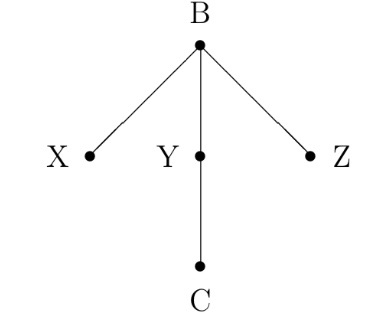 Now for the hardest part to see:

The curve CZ can be stretched into one of two cases:

The leftmost picture (case 1) is clearly one such curve, but it takes some thinking to convince oneself that the rightmost picture (case 2) is the only other possible curve CZ. One way to reason is that the loop BY CZ either encloses X or it does not.

There must be a curve CX, and the only possibility is that it can be deformed to give:

Then the house A must be in one of the regions I, II, or III.

So we are left with case 1 only. Stretching the curve CX, we get two cases again (by the same reasoning above - only two curves are possible determined by whether or not Z is inside the loop BY CX):

Thus all cases have been studied, and the Utilities Puzzle has no solution in the plane. Equivalently the graph $K_{3,3}$ is non-planar.

Here is a fun solution to this problem:

(Gas is Internet in this case) 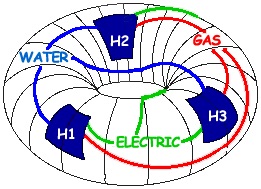 (As pointed out, this is not what the OP intended)

So, the question seems to be asking for an embedding of $K_{3,3}$ in the plane. This is well-known to be impossible. But, we live on a sphere, rather than a plane. However, it's also impossible in this case, which we can visualise using stereographic projection. You can get pretty close, $K_{3,3} \setminus e$ is planar (i.e. delete an edge).

But... thinking outside the box, there are situations where it is possible: 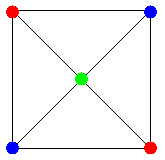 Not the answer you're looking for? Browse other questions tagged graph-theory puzzle or ask your own question.

33
Connecting three houses to three utilities
1
How to prove connecting 3 dots to three squares without overlap is impossible?
0
Graph or combinatorics proof to my concern to a water, gas, electric, puzzle?
0
Is it impossible to draw an edge from each node A,B,C to each node 1,2,3 without intersection?
1
Connect a set of nodes with another set of the same size without intersections
3
Can you prove $K_{3,3}$ is not planar without the Jordan Curve Theorem?

1
Connecting up boxes mathematically (Puzzle)
0
Ore's "Graphs and Their Uses" Problem Set 1.5, Problem 2 ...
4
Tricky Graph Theory Puzzle
3
Can you prove $K_{3,3}$ is not planar without the Jordan Curve Theorem?
1
A problem on finding the no. of impossible connections in a plane of utilities and houses.