Two players in a dice game to see who can roll a total of 60 first, taking turns each rolling 2 dice.

For one player, one die is 4 sided and one is 6 sided. Therefore the average roll for this player will be a 6.

The other player has two 6 sided dice. So this players average roll will be a 7.

A rough answer, from Monte Carlo simulation, is:

Here is the exact answer, which I used Mathematica to compute.

Here are the Mathematica rules I used to compute the probability of player 1 winnng. The other two cases are similar.
(sorry for the image)

With these rules in place I then computed p[60,60]. I thought it was simpler to start the players at 60 and count down to 0, rather than the other way round.

The first rule just says if player 1 has reached 0 and he player 2 hasn't, then the probability of player 1 winning is 1. The second rule is similar for player 2.

The third rule handles the case where both players have crossed the finish line. Note that despite the game description, there aren't really turns involved—there are rounds. It doesn't matter which player goes first, so me might as well consider all four dice being rolled simultaneously.

The fourth and final rule is where all the action is. The recursive sum is over all possible outcomes of the four dice (two for each player). The constant $864$ is merely $4\cdot6\cdot 6\cdot 6$. The p[x,y] = thing in the center is a kind of memoization (caching). Without it, the simplistic recursion would take forever. 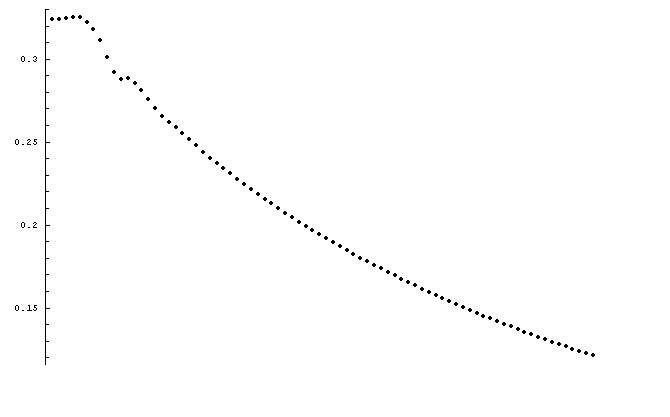 Here's how I approximated an answer:

We know player-2 usually wins. The expected value of player-2 after 9 games is 63, just over 60. So the expected number of turns the game will last is about 9. Let's consider another version of this game which is played for 9 turns exactly and the winner is the one who got the higher score.

Repeating the calculation I get about: 81%,16%,3% (but it's just an approximation anyway).

Some notes in case you're not familiar with convolutions and Fourier Transform: Look at a random variable X over some finite probability space of n elements. Think of X as a vector of n real numbers (representing its distribution). Then the operator T, defined as T(Y)=X+Y for any Y (this is not element-wise addition. this is addition of random variables, also called convolution). Then T is a linear operator in $\mathbb{R}^n$. It happens to be diagonizable. The Discrete Fourier Transform is just a change of basis, after which T is a diagonal operator. It may be a little surprising, but this basis does not depend of X (although T does). The i,i element in the diagonal of the matrix representing T in this new basis happens to be Pr(X=i). Computing the compositions of diagonal operators in very easy - just multiply the diagonals element-wise. This is the justification for the convolution theorem. After you're done adding random variables in this new basis, just return to the original basis (i.e: do the inverse Fourier transform) and get the desired probability vector of the addition of all the random variables you added.

Here's how the probabilities are calculated in python (I'm supplying all the routines you need):

Not the answer you're looking for? Browse other questions tagged probability probability-theory dice or ask your own question.