Where are the roots going?

Each polynomial of degree $n$ has $n$ different roots.

We could generalize this and ask

Given $f(z)$ holomorphic in some $\Omega$ (feel free to take any condition you want on $\Omega$), what is the relationship between the root of $f(z)$ and the roots of the truncated expansion of $f(z)$?

I've seen the suggested duplicate and its really interesting, though I am interested in a more general result :-)

Given $f(z)$ holomorphic in some $\Omega$ (feel free to take any condition you want on $\Omega$), what is the relationship between the root of $f(z)$ and the roots of the truncated expansion of $f(z)$?

Of course, a not-identically-zero analytic function can only have finitely-many zeros in any compact subset of its domain, so these extra zeros of $p_n$ as $n \to \infty$ must essentially be leaving the domain of $f$.

If $f$ is not entire, then it is a classical result of Jentzsch${}^1$ that each point on the circle of convergence of the power series is a limit point of the zeros of the partial sums $p_n$.

This basically says that the zero counting measures of the partial sums $p_n$ converge in the vague topology to the uniform distribution on the circle of convergence of the power series. A modern treatment of this and related results can be found in the book Discrepancy of Signed Measures and Polynomial Approximation by Andrievskii and Blatt.

If $f$ is entire then the behavior of the zeros of the partial sums is very different, as the example with $f(z) = e^z$ illustrates. In order to leave the domain of $f$, the zeros of $p_n$ which don't converge to zeros of $f$ must tend to $\infty$. How quickly they travel, and with what distribution, is a complicated question.

In his PhD thesis, Rosenbloom${}^3$ showed that these "extraneous" zeros of $p_n$ generally grow at a rate comparable to $|a_n|^{-1/n}$ as $n \to \infty$, and gave a general formula for their limit curves (after an appropriate scaling). A statement of his main result is given on p. 6 of my master's thesis.

There are still many problems to explore. For example, can we quantify how quickly the scaled zeros approach their limit curve? So far this has been done in some particular cases, but little has been done in general.

I even wrote a paper on the topic myself on the roots of truncated cosine. [1] Here's a chart I produced for this occasion where you can see the linear outward drift of the roots. 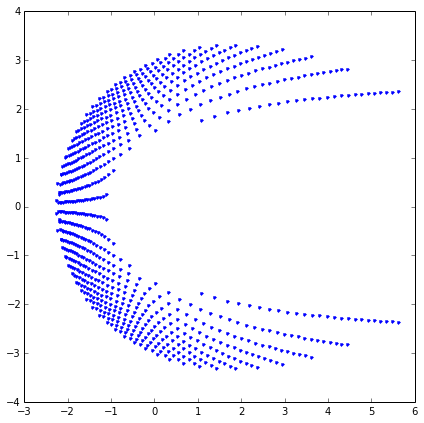 Here is the numpy code I used to produce it. Mathematica or Pari might be better suited.

Not the answer you're looking for? Browse other questions tagged calculus real-analysis complex-analysis analysis roots or ask your own question.