I once received a puzzle that can be described as follows: There are $12$ black pentagonal and $20$ white hexagonal pieces. The goal is to form a soccer ball from these (aka. truncated icosahedron). Similar to a (flat) jigsaw puzzle, each edge of each piece is equipped with either a "tongue" or a "groove" for interlocking (and there is only one type of these, that is, every tongue fits into every groove of every other piece). The assignment of tongues and grooves follows a highly symmetric pattern: Each piece has at least two tongues and at least two grooves; apart from that all possible shapes occur in equal number, that is:

It seems highly incidental that the required number of pieces is a multiple of the possible configurations - then again this is just the law of small numbers at work.

Anyway, I have spent hours on solving the puzzle manually, but never succeeded. The tricky thing is that it is very easy to just go ahead put together all but one or two pieces, but those last pieces just never fit. On the other hand, once I sat down and wrote a program to solve the puzzle by backtracking it began spatting out gazillions of solutions faster than the screen could scroll ... which is of course embarrassing for me as a puzzler.

My question is: Given the highly symmetric setup of the collection of puzzle pieces, there should be some "symmetric" solution to the puzzle. Can anyone find such a symmetric solution?

Of course, the term "symmetric" has to be taken a bit loosely here (and that makes this question somewhat opinion-based), after all the threefold repetition of pentagonal pieces and twofold repetition of hexagonal pieces excludes anything that is actually invariant under a symmetry movement of the soccer ball ($\gcd(2,3)=1$). So anything that can be found by contemplating instead of computer power and/or that can be described by a nice pattern instead of a piece-by-piece enumeration would be acceptable.

My solution (a point outside an edge means a tongue, inside, a groove): 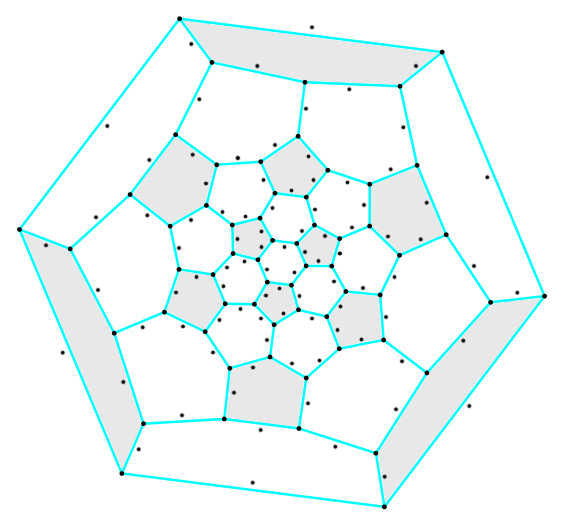 It is not completely symmetric, but still has a lot of symmetry.

The idea of my construction is to fill a half of the ball, then "flip" the filling so that the other half gets filled in inverted manner.

Step 1. Start with the central hexagon of the Schlegel diagram. It takes alternating tongues and grooves.

Step 2. Now we assign the tongues and grooves to the belt between two halves of the ball. This has to be very symmetric, since we are going to flip our construction symmetrically. Each pentagon gets one tongue and one groove in the belt. The hexagons alternate: two tongues, two grooves, two tongues,...

Step 3. Now we fill the inner pentagons symmetrically. Well, almost. I didn't manage to achieve the complete ($60^\circ$-rotational) symmetry, so one of the pentagons near the belt got two grooves instead of three.

Step 4. Fill in hexagons having in mind that they will be inverted to the upper (e.g. only one hexagon with three consecutive tongues and three consecutive grooves is allowed). I did this manually; spent couple of hours trying to get this work. Finally, I decided to spoil the symmetry of pentagons a little, then after several tries found the solution.

Step 5. Invert the construction to the outer half (inverting means replacing tongues with grooves and vice versa).

Animation of the process:

Not the answer you're looking for? Browse other questions tagged geometry puzzle symmetry or ask your own question.

6
How many possible combinations are there in Hua Rong Dao?
0
Lightbulb puzzle related to proofs by induction.
0
How to count jigsaw puzzle height and width in pieces.
43
Proving a jigsaw is possible
1
Algorithm to get the ideal size of EXACTLY n squares, to fit them into a x by y rectangle
2
What would be the chances of solving a standart 3000 piece puzzle completely at random?