Under what circumstances does local convexity imply global convexity?

In both these cases, we have a result saying something to the effect of: "local convexity implies global convexity". How far can this idea be generalized?

The following hypothesis, which may or may not be true, expresses the idea in the most general context I can think of.

Informally, "Inspect the boundary of a connected set with a (variable-size) magnifying glass. If, everywhere you look, it looks convex, then the set is globally convex." 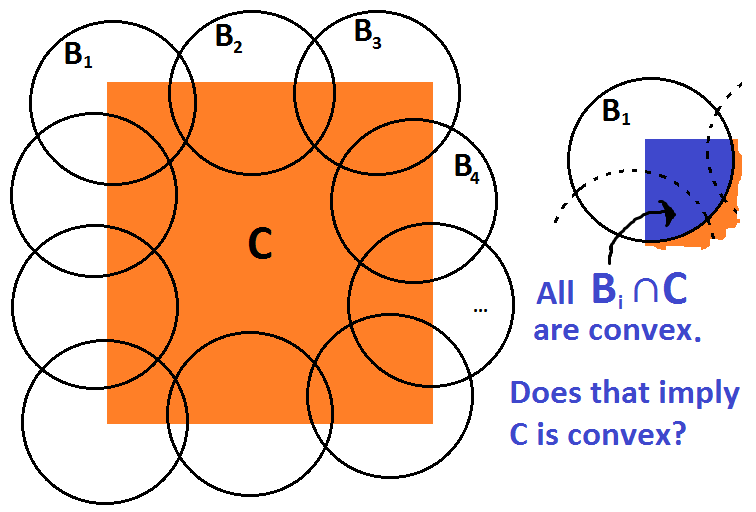 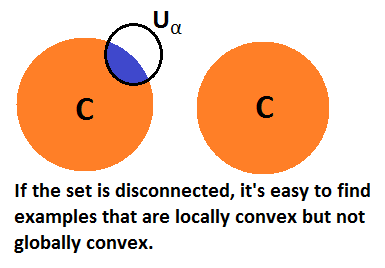 From this we see that there is a topological element to the question - if the connectedness condition is relaxed, it's easy to come up with counterexamples.

We suppose that $X$ is a locally convex vector space. Before showing that the conjecture is true (under some conditions), we show a helpful lemma. 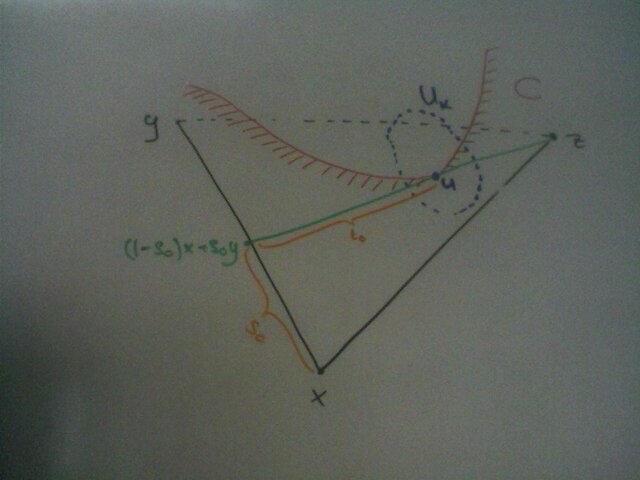 Proof. Suppose that $\Delta(x,y,z)$ is not contained in $C$. In the following, the boundary and interior are considered relative to the triangle $\Delta(x,y,z)$.

We have the following corollary (in the open case, an easy adjustment of the above proof has to be given).

Now we are ready to answer positive to the conjecture in the case that $C$ is open or closed.

First, let $B$ be a maximal among the subsets of $A$ with the property that the convex hull of $\bigcup_{\alpha\in B}U_\alpha$ is contained in $C$. For example, such a maximal $B$ can be found with Zorn's lemma, using the poset $$ P:=\big\{B\subseteq A:\mathrm{Hull}\big(\textstyle\bigcup_{\alpha\in B}U_\alpha\cap C\big)\subseteq C\big\} $$ ordered with inclusion. Here, $\mathrm{Hull}$ denotes the operation of taking the convex hull.

Now let $C^\prime$ be a maximal convex subset of $C$ which contains $U_\alpha$ for each $\alpha\in B$. Here's an outline of the rest of the proof.

There is a classical result known as the Tietze-Nakajima Theorem which more or less answers this question (at least in finite dimensional vector spaces).

Theorem If $X$ is a closed, connected and locally convex subset of $\mathbb{R}^n$ then $X$ is convex.

Here locally convex means exactly what you proposed in your post: for every $x\in X$ there is a ball $B_{\varepsilon}(x)$ centered at $x$ such that $B_{\varepsilon}(x)\cap X $ is convex in the usual sense. As you've noted, the definition is only important for points that are not in the interior of the set.

The proof is given an extremely nice exposition in Section 2 of the paper Revisiting Tietze-Nakajima: Local and Global Convexity of Maps (which also contains a nice generalization of your conjecture, as the title suggests). I recommend reading about it there (if you are still interested): http://www.utm.utoronto.ca/~karshony/papers/convexity-corrected2.pdf

The original papers are:

Edit: I've decided to add a sketch of the proof here:

I'm really afraid of giving a negative answer to this claim, after seeing above huge proofs by users (and their up-voted scores ) !

Maybe I am not right, but just in $R^2$ take open upper half space union two distinct points on $X-$axis. This set satisfies the conditions of your conjecture but it is not convex!

Not the answer you're looking for? Browse other questions tagged general-topology convex-analysis or ask your own question.