Prove there exists a triangle without using Euclidean Parallel Postulate

How do I prove part 1 without making use of the Euclidean Parallel Postulate?

I know that d(A,B)+d(B,D)= d(A,D) due to definition of betweenness so it is on a straight line. To establish the side of AC, I could construct a ray AC by Angle Construction Postulate on a half plane on the same side of ray AB that makes angle $a$ and perhaps draw a line parallel to ray AC to show that angle is B is greater than angle A. I'm not sure how to show this is a triangle.
Should I show the overlap of the half planes using definition for interior in order to show that or prove that the triangle exists? Or is just the definition of the interior of any angle enough to show that the triangle exists?

If angle $a$ is smaller than angle $b$, then the two lines meet somewhere if we keep following them upward.

I believe it's impossible to do this without using some form of the parallel postulate, because it seems like the statement doesn't hold true in non-Euclidean geometry. 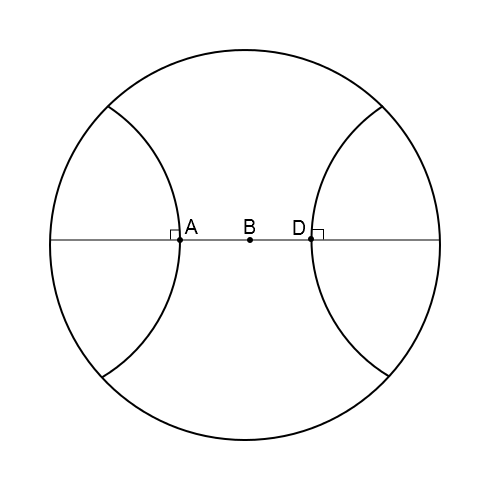 $A$, $B$, and $D$ here are on a diameter of a circle representing the Poincaré model of the hyperbolic plane, with $B$ at the center; the two arcs through $A$ and $D$ are the (hyperbolic) lines through those points orthogonal to the line $ABD$. If we choose $b=\angle CBD = 90^{\circ}$ then $C$ must be on the (hyperbolic, but also Euclidean) line through $B$ orthogonal to the diameter; but now choosing $a$ just slightly less than $90^\circ$ means that we don't have 'enough space' to put $C$ anywhere on that line to form the correct angle $\angle CAB$.

Not the answer you're looking for? Browse other questions tagged geometry euclidean-geometry proof-writing triangles or ask your own question.