Rubik's Cube Not a Group?

I read online that

although the 3x3x3 is a great example of a mathematical group, larger cubes aren't groups at all.

How can that be true? There is obviously an identity and it is closed, so that must mean that some moves aren't invertible. But this seems unlikely to me.

The 4x4x4 cube and higher aren't groups in the same sense that the 3x3x3 cube is a group.

The set of reachable positions of a 3x3x3 cube, viewed as functions from a 54-element set (representing the locations of the stickers) to a 6-element set (the colors of the stickers) form a group. The operation here is given by the following: For x, y positions of a 3x3x3 cube, let $a_1a_2 \cdots a_n$ be a sequence of moves which, starting from the identity, puts the cube into position x, and $b_1b_2 \cdots b_m$ the same for y. The product xy is the state the cube is in after the sequence $a_1 \cdots a_n b_1 \cdots b_m$.

The fact that this operation indeed forms a group isn't as trivial as it first seems. The issue isn't with associativity, identity, or invertibility. Instead, it's with well-definedness. How do you know that the choice of sequences $a_1 \cdots a_n$ and $b_1 \cdots b_m$ doesn't make a difference?

For the 3x3x3 cube, the way to solve this is viewing it as a subgroup of the symmetric group on the set of all 54 stickers. This doesn't work for larger cubes, because it's possible to come up with moves that move some of the cubies around, without changing how the stickers. The stickers can move, without their apparent colors changing. To see why this is impossible for a 3x3x3 cube, note that any cubie is uniquely specified by its stickers, so any permutation of 2 stickers of the same color in the cube group must permute the cubies, which then can not be the identity.

But on the 4x4x4 cube, this fails. All 4 of the starred stickers here, for example, are indistinguishable, in the sense that you could permute them and still have a solved state. I don't think a permutation of just these 4 stickers is possible, but there are many permutations of indistinguishable cubies which can be done. According to Dustan Levenstein in the comments, any even permutation of these 4 stickers (or more generally of any center stickers) is possible. 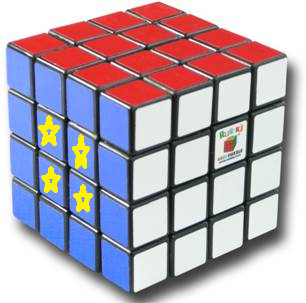 The way to prove formally that the 4x4x4 cube is not a group is to find a sequence of moves that acts as the identity on one configuration, but not on another configuration. This is pretty easy to do, but I don't remember the precise solution, so I'll omit it. (If anyone really wants such an example, comment and I can dig one up.)

It is true that if we labeled all of the stickers somehow, forming a so-called "supercube", and required that the labels also match up, then we would have a group. This group would be constructed in the same way as the 3x3x3 group, as a subgroup of the symmetric group on the 96 stickers of the 4x4x4 cube.

This group acts on the set of positions of the 4x4x4 cube transitively, but not freely. This, in group theoretical language, is why the 4x4x4 cube positions do not form a group. We can still study the larger group, but we need to take into account that the action isn't as nice as in the 3x3x3 case.

Arguments that the 3x3x3 is a group while the 4x4x4 isn't, based on the permutability of the center pieces in the latter case, are confused nonsense. By that standard, the 3x3x3 isn't a group either. Reason: although it is true that one cannot move the centers to other locations in the 3x3x3 case, one can rotate them in place. Consider this twist sequence: $(RLFR^-L^-F^2)^2$. If you use a cube with marked stickers, you will see that the net effect of this sequence is to rotate the $F$ center by 180 degrees. There is another sequence which rotates one center 90 degrees clockwise and another center 90 degrees counterclockwise. I see no reason to discount center rotations as 'movement'.

The real question is, when we say "the cube's group", what are we referring to? From all the articles I've read, the universal presumption is that the group is the set of all 'sticker' permutations (including permutations of the stickers' corners) achievable by any sequence of face/slice twists, regardless of visual distinguishability. In group-theoretic terms, there are three generally acknowledged constructs here:

I agree that the third construct isn't a group, but (to my knowledge) no one serious about cube theory ever thinks of that construct when referring to the cube as representing a group.

1
The redundancy of Rubik's cube states
323
Nice examples of groups which are not obviously groups
0
Are actions in the $3\times 3\times 3$ rubik cube a group?

3
Example of a linear algebraic group which is not a Lie group
4
How to learn about the Rubik's Cube?
17
$45^\circ$ Rubik's Cube: proving $\arccos ( \frac{\sqrt{2}}{2} - \frac{1}{4} )$ is an irrational angle?
2
non-cyclic example that there is an element not contained in any maximal subgroup
1
Why is there more than 1 solution that requires 20 moves in rubic cube solving?
2
Rubik's cube group elements and their distance from the solved position
1
Exists a discrete isometry group that's not finitely generated?