How to calculate the quaternion from/and axis angle having parent and target position (camera and its target)?

I want to calculate the orientation (quaternion) of the virtual 3d camera that is looking at some point in 3d space. 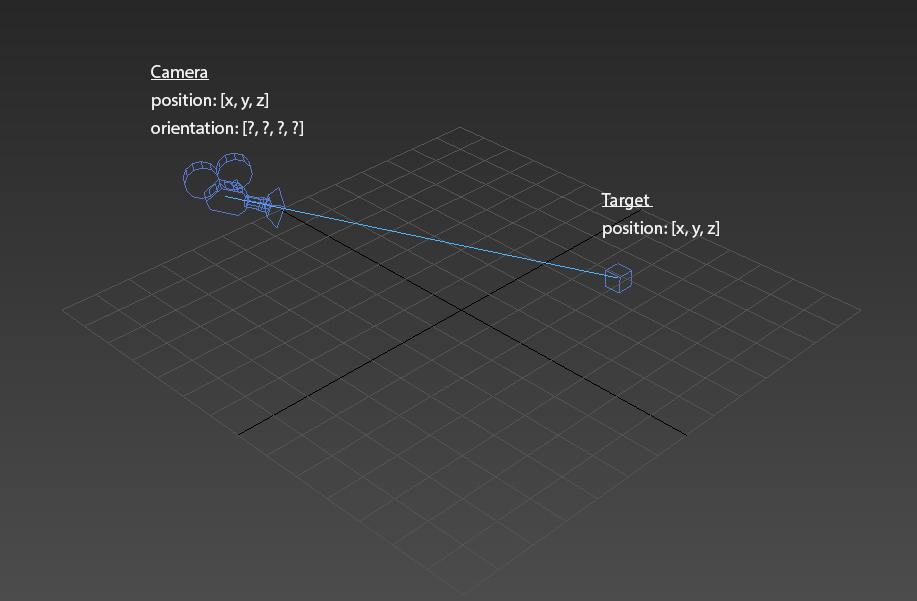 According to this explanation the quaternion be calculated from axis-angle:

I calculate the axis angle this way (it's a pseudo code):

I guess that axis-angle to quaternion formula is ok.

Then maybe the axis angle should be calculated differently?

I thought about axis-angle as "the direction in which the object is pointing + the angle around that direction". Maybe it's more like "rotate the object around given direction by this angle"? But if so, axis-angle would not cover all possible 3d orientations.

How to calculate the axis angle having target.position and camera.position?

I work on left-handed coordinate system, but the solution should be quite analogical for right-handed one.

Edit, clarification based on @anon request:

I'm not a mathematician (more a programmer) and some parts of quaternion math looks complicated to me. But I will try to explain what I've meant by "orientation of the camera".

In almost any 3d software (e.g. 3ds max, Blender) or game engine (e.g. Unity) you have two main components for each object: position (x,y,z) and orientation (quaternion x,y,z,w). To get the object in right place you rotate it first by orientation and then translate by position to place in the 3d scene before rendering.

By orientation of camera I mean that, common for 3d software, "object orientation" (on the illustration you can see that camera is rotated and translated from the center of the scene). Precisely speaking, in left-handed coordinate system, with y axis pointing "up".

Let's assume we remove the camera's target from an image for a moment. I should be able to restore the camera by: placing un-rotated camera object in [0,0,0], rotating it by my orientation (which I want to calculate) and then translating by position (which I already have).

In short, the axis of rotation that turns your camera to the desired orientation is usually nowhere near the axis along which the camera ends up pointing.

The axis and angle to achieve a general orientation is not usually as obvious as in this simple case. Rather than trying to guess it directly, you are probably better off performing a series of simple rotations, for example elevate or depress the angle of the camera and then rotate it around the vertical axis (the $z$ axis in my example, or whichever of the axes is vertical in your system). If you also want the camera to be "twisted" around its own axis, then you might want to rotate it about that axis before the other two rotations.

To represent a sequence of rotations, you multiply together the quaternions for each rotation. You then have a single quaternion that represents a single rotation taking the camera from its original orientation to the desired orientation.

This other, original orientation is usually some reference orientation: for instance, camera pointing upward the z-direction, camera right along the x-direction, and camera down along the y-direction.

You haven't fully specified the orientation desired of the camera. For instance, once the camera points to the target object, you could spin the camera along that axis and that would be equally valid.

Not the answer you're looking for? Browse other questions tagged euclidean-geometry 3d rotations quaternions angle or ask your own question.

0
Apply Euler vector to translate vector
3
Nullify (zero out, cancel) rotation in an arbitrary axis in a Quaternion
1
Rotate the segment by quaternion - how to find actual segment's end position?
0
How to tumble a camera about a point
5
Quaternion - Angle computation using accelerometer and gyroscope
0
Problem with converting rotation representations (quaternion, axis-angle, etc)
0
How to make an object face another object in 3D space?