Is the square root of a negative number defined?

I have been in a debate over 9gag with this new comic: "The Origins" 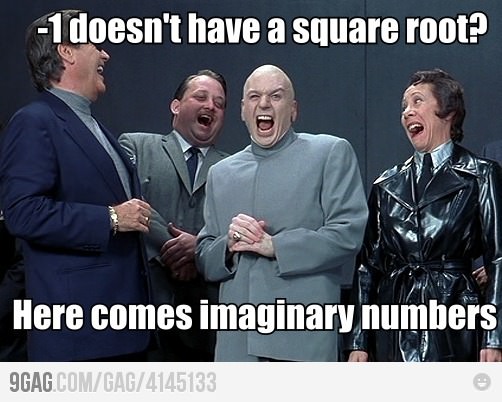 There is no such thing as sqrt(-1). The square root function is only defined for positive numbers. Sorry...

This wasn't by ignorance of complex numbers. In the short round of arguing that happened there, the guys insisted that negative numbers don't have square roots, and that $i$ is defined such that $-1 = i^2$, which is not the same as $i = \sqrt{-1}$. In their opinion, too, no respectable math textbook should ever say that $i = \sqrt{-1}$; which is precisely how Wolfram MathWorld defines $i$.

Is there a consensus over if negative numbers have a square root? Are there some gotchas or disputes with the definitions I should be aware of in the future?

I think Asaf's answer, while correct, misses some of the point. It's fairly clear from context that the OP wants to know whether writing $i=\sqrt{-1}$ makes sense in the complex numbers. This is essentially a matter of convention. You can define it that way, but any way you define the function $\sqrt{z}$ it won't have all the properties that it does for real numbers.

A square root of a number $a$ is any number $x$ with $x^2=a$, or equivalently a root of the polynomial $x^2-a$. The fundamental theorem of algebra implies that every complex number $a$ has a square root. In fact, for $a \ne 0$, $a$ has precisely two square roots, which are additive inverses.

You can already see that this is a bit of a problem in the non-negative real numbers. For this case, we choose $\sqrt{a}$ to be the unique non-negative square root, which has a lot of nice properties. Viewed as a function of $a$, $\sqrt{a}$ is continuous, and is a multiplicative homomorphism (i.e. $\sqrt{ab}=\sqrt{a}\sqrt{b}$). These properties are nice enough that it makes sense to call this choice of $\sqrt{a}$ the square root of $a$, instead of a square root of $a$. Of course, this is already abusing terminology a bit, but don't worry too much about that.

It is perfectly reasonable to try to extend the square root function $\sqrt{a}$ for $a$ any complex number, since we know that complex numbers have square roots. But unlike in the positive reals, there's no really nice way to choose what the square root of $a$ should be. In particular, for $\sqrt{-1}$, we can choose either $-i$ or $i$, and since complex conjugation preserves all the algebraic properties of $\mathbb{C}$ we shouldn't expect a nice way to do so purely based on algebraic considerations (like we had for the nonnegative reals).

For one thing, you lose the homomorphism property. There are cases where $\sqrt{ab} \ne \sqrt{a}\sqrt{b}$. This is generic for all extensions, of the square root function, too. There is no we could avoid it by choosing a different definition. You can look at this question to see why this must fail generically.

Furthermore, our choice is not continuous, since $\lim\limits_{y \to 0^+} \sqrt{x-iy} = -\sqrt{x}$ for $x,y$ real. We could make it continuous, but at the cost of not defining $\sqrt{z}$ for $\theta =0$. This is what's called a branch cut. But this is precisely the case when $z$ is a positive real number! Some people do this, but it's bad practice and probably confusing. We could define a branch cut elsewhere, for instance, only allow $-\pi < \theta < \pi$ and use the same formula. Now the branch cut is on the negative real axis, which is better since our notation doesn't conflict with the notation for real numbers, but now $\sqrt{-1}$ is undefined, and $\lim\limits_{y \to 0^+} \sqrt{-1+iy} = i$ while $\lim\limits_{y \to 0^-} \sqrt{-1+iy} = -i$. If you don't care about continuity at the negative real axis, you can extend the definition to $\theta = \pi$, which again gives you back $\sqrt{-1}=i$. We could also induce a branch cut other places, for instance on the positive imaginary axis, to avoid both the problem of disagreeing with the real square root and of being undefined or discontinuous on some part of the real axis, but then your branch cut has to change under complex conjugation, which can also be a problem.

There are other ways to address the issue. The nicest is the theory of Riemann surfaces. The idea here is that you think of $\sqrt{z}$ as a function on a set that is larger than just the complex plane. The Riemannn surface for square root is essentially 2 copies of the complex plane, split at the branch cuts and glued to each other. Here is an image, taken from Wikipedia, for the Riemann surface for the square root function: 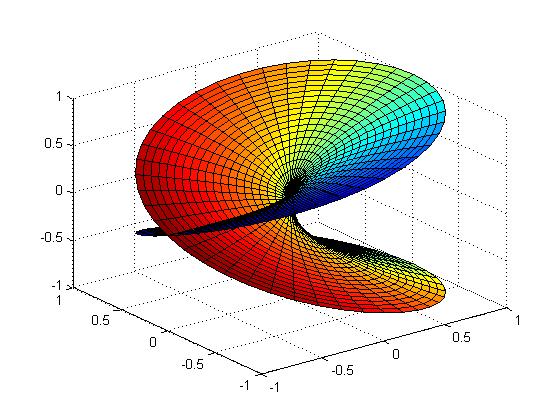 This approach is not without fault either, since you're now no longer talking strictly about the square root of a complex number. The points on the Riemann surface tell you which square root to pick, and there is one point for each square root. Since -1 is a complex number, not a point on the surface, $\sqrt{-1}$ doesn't make sense. However, there are 2 points corresponding to -1, one of which has square root $i$ and the other one $-i$.

You can also consider $\sqrt{z}$ to be a multivalued function, returning a pair of numbers which are both of the square roots of $z$. This works fine, except for when you want to do any sort of actual calculations. In particular, in this approach, $\sqrt{-1} = \{i, -i\}$. This approach does have the homomorphism property that $\sqrt{ab} = \sqrt{a}*\sqrt{b}$, once you define what it means to multiply sets (namely, $\{a,-a\} * \{b,-b\} = \{ab,-ab\}$). This definition does not agree with our definition for positive reals, but it's not as bad as before since the square root of a real number is at least an element of the set of its square roots as a complex number.

EDIT (to clear up an issue in the comments)

I will say, though, that saying that $i = \sqrt{-1}$ is the definition for $i$ is unacceptable in my view. You can't define $i$ this way because it makes no sense. Unfortunately, this is exactly how MathWorld "defines" it, but I think it's circular and doesn't make sense.

$\sqrt{\phantom{-1}}$ is a function which is defined on the non-negative real numbers. $\sqrt{-1}$ does not exist in this context. The whole reason to construct the complex numbers is to fix this, so that you can solve equations like $x^2 = -1$. Before you can say "$i$ is a square root of $-1$" you need to make sure that there is some context in which -1 has a square root. Of course, we all know that the complex numbers are a consistent system with this property, but for hundreds of years people were not sure about this.

But even once you have constructed $\mathbb{C}$, I would argue that defining $i = \sqrt{-1}$ is bad practice. Sure, from an algebraic standpoint, the two square roots of $-1$ are indistinguishable. So there's nothing wrong with defining $i$ to be a square root of $-1$.

The issue here is that $\sqrt{\phantom{-1}}$ is not some universal operator which takes square roots in any context. It's a function on $\mathbb{R}_{\ge 0}$, which we may or may not want to extend to $\mathbb{C}$. Writing $\sqrt{-1}$, without defining $\sqrt{\phantom{-1}}$ on $\mathbb{C}$, is sure to lead to confusion. In fact, whoever wrote the MathWorld article doesn't want to define $\sqrt{z}$ to be just any square root of $z$, for each complex $z$. They at least want continuity on some relatively large subset of $\mathbb{C}$, and some other relatively nice properties. The fact that there are so many ways to define $\sqrt{z}$ for complex $z$ is reason enough to be explicit about what is meant when one writes things like $\sqrt{-1}$.

It's just not clear what $\sqrt{z}$ means until you have defined it. The proper order to do it is this: First, you construct the complex numbers. Second, you choose a square root of -1 and call it $i$ (the other root is obviously $-i$). Finally, after you know what $\mathbb{C}$ and $i$ mean, now you can define what $\sqrt{z}$ means for complex $z$ (if you even want to). At this point, it may or may not be true that $\sqrt{-1}=i$, but if it is this is the definition of $\sqrt{-1}$, not of $i$. I'll also note that it isn't immediately clear that you can even take square roots of arbitrary complex numbers; this is a fact that has to be proven.

I realize this is seems pedantic, and once you're familiar with field extensions and know the existence of algebraic closures for arbitrary fields you can abuse language and define things like $i=\sqrt{-1}$ since you know there is a consistent way to do it (especially if you're not worried about continuity and such). But at the level of someone seeing complex numbers for the first time, it's just too likely to cause some confusion. Of course, people did this sort of thing without explicitly constructing the complex numbers for quite a long time, but no one was really sure that the complex numbers were mathematically consistent. Now that we know they are, they should be presented as such.

tl;dr: There are many ways to generalize the square root function to the complex numbers, some of which have $\sqrt{-1} = i$. However, all of them lack some properties of the real square root function. Different people have different preferences. Some people prefer to reserve the symbol $\sqrt{\phantom{-1}}$ for positive reals, and just talk about a square root of a complex number. For them, the properties of the real square root other than just being a solution to $z^2=a$ are too important to use the same symbol. Some people care less about continuity, being defined everywhere, etc., and they will freely write $\sqrt{-1} = i$. It is a matter of personal preference. You can use whatever convention you like, but need to make sure to be consistent and don't write things like $\sqrt{ab} = \sqrt{a}\sqrt{b}$ when they don't hold, or not write $\sqrt{z}$ where it is undefined. What definitely always holds, regardless of convention, is that $i^2 = -1$.

The question whether something has a root or not must include a setting. Definitions do not appear magically, they require some preexisting framework.

However this is not only when you ask yourself about square roots of negative numbers.

These analogies can be stretched into finer details and carried out in other parts of mathematics. The thing to take from that would be that talking about "existence" requires some sort of framework, which is something that the layman is often oblivious to, and accepts the mathematical world as a fixed entity.

My experience tells me that when someone tells you something like:

There is no such thing as sqrt(-1). The square root function is only defined for positive numbers. Sorry...

It is going to be nearly impossible to convince him otherwise, and it's even less likely to do so on the internet.

It is irrationally inconsistent to accept that there is a defined square root over the non-negative real number line, but not elsewhere.

(That kind of thinking seems like a remnant of the suspicion that imaginary numbers themselves are some kind of fraud, a view that is outdated by several hundred years.)