Is there more to explain why a hypothesis doesn't hold, rather than that it arrives at a contradiction?

Yesterday, I had the pleasure of teaching some maths to a high-school student. She wondered why the following doesn't work:

I explained it as follows (slightly less formal)

However, she then went on to ask 'But why then is it false? You only proved that it's false!'. As far as I'm concerned, my little proof is a perfect why explanation as far as mathematicians are concerned, but I had a hard time convincing her - the only thing I could think of is to say that the square root operator is not a linear operator, but I don't really think that adds much (besides, I really don't want to be explaining and proving linearity to a high school student).

So, my question: is there anything 'more' as to why the above doesn't work, or was I justified in trying to convince her that this is really all there is to it?

I was one of those students that was fanatical about the "why," so I can give my own viewpoint on this. When I asked "why" on something like this, its because I was looking for a general principle I could apply. I wasn't just concerned with the problem at hand, but rather the situation at hand raised a red flag because my intuition wasn't lining up with what I was told. I was concerned with the legion of potential misconceptions I might be holding onto because there was some underlying thing I was missing. I needed to understand, in my own terms, what the "real deal" was.

That "real deal" is different for each individual. Several other answers have already pointed out that there won't be a one-size-fits-all answer for this, because each student thinks about math in a different way. Some are visual learners, needing pictures. Personally, I viewed a great deal of this from the perspective of semantics vs syntax: What meanings are true versus what syntactic manipulations are valid. So naturally when I view the issue your student had, I view it from my own perspective.

From my perspective, the issue is that it looks like there is a valid syntactic manipulation, $\sqrt{a+b}=\sqrt a + \sqrt b$. If I am told that that manipulation is invalid, I want to understand why. The words I would now use to describe why is that what I am trying to do here is "distribute" the square root over the addition operation, and you're not allowed to do that. If I were to remove the square root, and replace it with a more generic function, $f(a+b) = f(a) + f(b)$, it starts to become more clear that such an assumption is not always valid. In fact, it starts to look like a truly special case (especially when you consider that the above assumption doesn't even hold water for simple cases like $f(x) = x + 1$). The ability to distribute one function over another is not the norm, its the special case that occurs in a few situations (like distributing multiplication over addition).

This ends up reframing the problem away from "why can't I distribute a square root over addition" to "what special properties are needed to allow the distributed property?" It moves the specialness away from square roots, and puts specialness on things like addition and multiplication. It starts to lead one to appreciate why addition and multiplication are so useful: they have so many nice convenient properties other functions don't have!

You did not arrive at a contradiction, and technically, you did not even have a theorem in the first place.

This theorem is false because the statement

which is the negation of the theorem, is true. This statement is true because you can set $a=b=1$ and prove that it is true.

I've found that people often respond well to visual proofs as satisfactory answers to "why" a theorem is true. In this case you could use a diagram that looks something like the following: 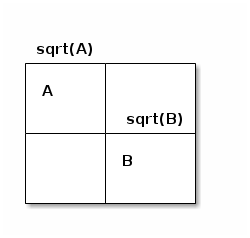 This is meant to be a square with side length $\sqrt{A}+\sqrt{B}$, but which clearly does not have area $A+B$, and therefore the side length cannot also be expressed as $\sqrt{A+B}$.

This isn't a technical issue; it's a human one. So it needs a human approach.

All people are blonde.

If she disagrees, ask her why.

Help her see that a counterexample to the proposed theorem shows both that it's false and "why" it's false (which are really the same thing).

She may be wondering why her intuition is wrong; I suspect everyone has wondered that (theorem! ;). This is particularly true of distribution.

Explain that just because something looks like it could be true, doesn't mean that it is true. Distribution of multiplication over addition ($a(b + c) = ab + ac$) is very special; most operators don't have this property.

This is why a careful study of math is important; intuition can lead us astray.

Assuming it wasn't about the definition Problem the other answers have brought up:

Explain it with the "Pizza problem":

It explains the core concept in a nice visceral way, which some people need before they can accept the logic behind something.

(Alternatively use squares instead of circles, it makes the answer even more obvious.)

From there you can then expand the concept to squareroots.

For the square root in particular, you can appeal to the Pythagorean Theorem. Since you've already used $a$ and $b$, let's label the sides of a right triangle $p,q,r$ instead, with $r$ as the hypotenuse. Then $p^2 + q^2 = r^2$.

Another way to show "why" $\sqrt{a + b}$ is not $\sqrt a + \sqrt b$ (or perhaps rather how these two expressions come to be unequal) is to imagine we start with two squares of areas $a$ and $b$; if the squares are not equal, let $b$ be the smaller one. Now put square $b$ alongside square $a$ so they share a vertex and part of the side of the larger square. Notice that the longest side of the resulting figure (consisting of collinear sides of the two squares) has length $\sqrt a + \sqrt b$.

Now deform $b$ into a border around two sides of square $a$ so that square $a$ plus the border is a slightly larger square. Notice how we had to "flatten" the smaller square to make this work, so instead of a figure with a side $\sqrt a + \sqrt b$, we get a square whose side is larger than $\sqrt a$, but not nearly that much larger. That is, an amount of "space" in the plane with area $b$ is a lot "fatter" when we draw it as a single square than it is when we "stretch" it over two sides of a larger square.

How about a counterexample to disprove a universally quantified statement? For instance $\sqrt{9+16}\ne \sqrt{9}+\sqrt{16}$.

Because any continuous function from real numbers to real numbers where $$f(a+b) = f(a) + f(b)$$ has a graph that is a straight line through the origin, and the graph of $y = \sqrt x$ is curved.

I'm not sure if I'm just stating the obvious here, but it has only been implicitly touched by the other answers, so I'll explicitly write it down here.

For me the answer to "Why is this wrong?" is "Because this is breaking the rules that we agreed on!":

In mathematics, a "theorem" or a "statement" is stated in a specific language and to decide if we want to call it true or not is judged by certain rules. If it doesn't comply with the rules, we call it wrong. In your example the statement is not compliant with the rules of the underlying logic as you already showed.

I know that in real world applications (and situations) this abstract reason feels unsatisfactory for some people and that's perfectly fine. It just shows that you didn't present your argument in a way that convinces the other person to agree with your view of (not) complying with the rules.

For your specific question this means:

I find the second part of your question (2. above) quite hard to answer and as it was already hinted at in the comments, this should most likely be answered not by mere mathematicians but by someone with a background in education/didactics. My arguments above focused on the mathematical aspect of your question. (Not repeating formal issues already covered by other answers.)

Others have pointed out the weakness, I would like to make some supplementary remarks.

It's true that false statements aren't required to have a fundamental logical reason for being false - they are false because a counter-example exists. In this case though, I feel the why of it is really asking this: why is the square root operator not linear, unlike some other operators that you have seen in class. The simple answer is that most operators are not linear, and you have to examine each one to determine if it is or not. Which you go about by attempting to prove the sort of identity that she assumed was true.

This shows that the original identity does not make sense.

If this is true, then we can square both sides of the equation:

This resulting equality can then be manipulated as follows:

By the rules of real numbers, which do not have zero-divisors, if $ab=0$ then either $a=0$ or $b=0$. Looking back at the original supposition, it will hold given either condition. So the answer is that the supposition is correct as long as at least one of $a,b$ is $0$, or in more explanatory language, "you can do that, as long as either $a$ or $b$ is zero."

I have a different perspective on this question that I want to share. The answer to your questions is that there is nothing more to why that hypothesis is false and you are completely justified in trying to convince her of this.

For instance, consider the proposition

A ball thrown into the air always falls at a angle of $45^{\circ}$ to the ground.

One can say that this proposition is false by showing a counter example, but to answer what causes this to be false, one has to show that this contradicts law of gravitation, which we surely know to be true.

Not the answer you're looking for? Browse other questions tagged proof-writing linear-transformations or ask your own question.

54
Intuitive Understanding of the constant "$e$"