I understand the left side, which is obvious, but I'm struggling to get anywhere on the RHS. I also would appreciate suggestions on how to approach these kind of problems. I was told to use committees and split them up, but even then it's not so intuitive to me.

I've tried substituting small numbers to see where I can go.

Thank you in advance for your time.

The committee trick works pretty well. Say you want to choose a committee of $k$ people out of $n$. Among $n$ people there are two leaders (you and me). The terms on the RHS are number of possibilities: with both leaders, with one leader, and with no leaders.

Suppose you want to form a committee of $k$ people from a group of $n$. We know that we can do this in $\binom n k$ ways.

But suppose that two of the people are somewhat distinguished; let's call them A and B. So we want to count the cases based on these guys being in the committee or not separately:

The sum of these cases is equal to $\binom n k$.

We can start with the right hand side:

This can finish the problem pretty quickly. 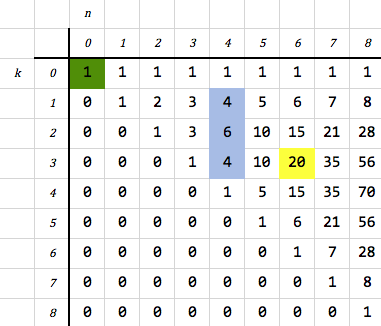 If you’re patient and careful, you can check, for example, that there are $20$ different paths from the green square to the yellow square by southward or southeastward steps.

This is pretty much a proof of your identity, because the number of paths from the green square to any (yellow) square containing $n\choose k$ must pass through one of exactly three (blue) squares in the column where $n$ is smaller by $2$, and the paths to the yellow square can be counted separately according to which blue square they pass through, and if you do so, you get the formula you asked about.

One way to do is to expand R.H.S., but it is not a wise choice, see others' answer.

Not the answer you're looking for? Browse other questions tagged combinatorics binomial-coefficients or ask your own question.