tl;dr I am not asking for a solution, that I already have. What do the generators for $\mathbb{R}^3 - \{n\text{ lines through the origin}\}$ look like explicitly, without making reference to any deformation retraction or homeomorphism?

Exercise 1.2.4 of Hatcher asks you to compute $\pi_1(\mathbb{R}^3 - X)$ where $X$ is $n$ lines through the origin. I have been able to solve it (it should be the free group on $2n - 1$ letters), and while I am comfortable with the argument (deformation retract to $S^2$ with $2n$ points removed, homeomorphism to $2n - 1$ points removes in $\mathbb{R}^2$, induction $+$ van Kampen), I originally wanted to do this directly without retracting the space, however I do not see how the generators should look like explicitly in this case.

For $n = 1$ this is not a problem; given a fixed based point any loop is only dependent on (up to homotopy) how many time it goes around the removed line, and is therefore the integers. For $n = 2$ things start getting weird; I believe there should be four generators, not three. Consider the following illustration: 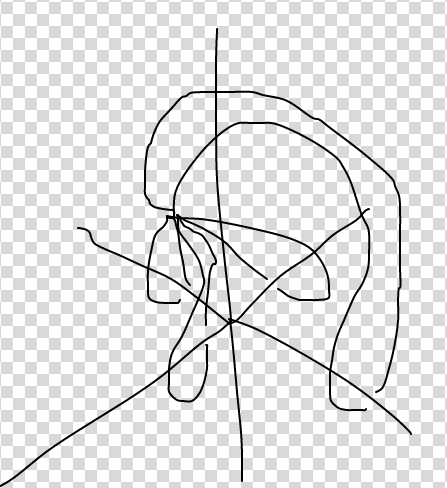 here I assume that the two removed lines are the $x$ and $y$ axes. Wouldn't all four of these loops act as generators for the fundamental group of $\mathbb{R}^3$ minus these two axes removed? (If the illustration is unclear: each loop loops around the removed line once, not looping around any of the other removed lines. Hence for each line we have two loops, one for each side of the origin.) Of course, I do know this claim is incorrect (as I have proved it to be). I am asking for an explicit description of the generators of this space for $n = 2$, without making any changes to the space, i.e. no homeomorphisms, no deformation retractions. Given a basepoint on this exact space, what will the three generators look like?

The $n$ lines that you remove can be seen as $2n$ half lines starting from the origin. Choose any $2n-1$ of those. For each one take a loop from a fixed basepoint which winds once around that half line (and "only" that). The homotopy classes of these loops generate freely the fundamental group of your space.

Let's put orientation and labels to the loops of your example ($\mathbb{R}^3$ with the $x$ and $y$ axes removed): 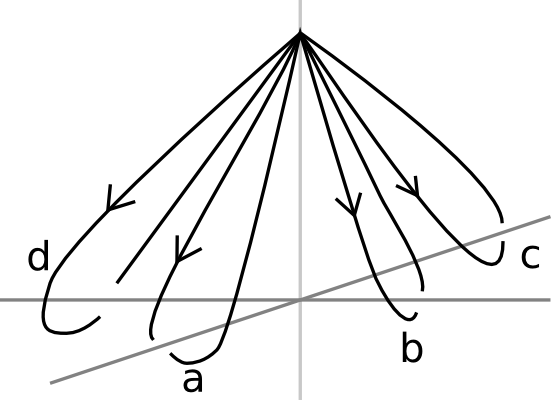