Question: What is a succinct proof that all pentagons are star shaped?

In case the term star shaped (or star convex) is unfamiliar or forgotten:

Definition Reminder: A subset $X$ of $\mathbb{R}^n$ is star shaped if there exists an $x \in X$ such that the line segment from $x$ to any point in $X$ is contained in $X$.

This topic has arisen in the past in my class discussions around interior angle sums; specifically, for star shaped polygons in $\mathbb{R}^2$ we can find their sum of interior angles as follows:

This formula for the sum of interior angles holds more generally (often shown by triangulating polygons) but the proof strategy above already fails for some (obviously concave) hexagons.

The above depicted polygon is not star shaped.

Moreover, it is a fact that any polygon with five or fewer sides is star shaped. And so I re-paste:

Question: What is a succinct proof that all pentagons are star shaped?

Edit: Since it has come up as a counterexample (of sorts) for each of the first two responses, here is an example of a concave pentagon that may be worth examining in thinking through a proof.

Note. Of course, you should never assume. A triangle with edges in one hemisphere of a balloon, but an "interior" that contains the other hemisphere, has no "convex" vertices at all. So, this solution is flawed from its very first word. Overcoming the flaw is left as an exercise to the reader.

(A perhaps more common term than star convex is star-shaped.)

I assume you view the pentagon as a closed set, including its boundary, so that the line of sight from $x$ can touch the boundary and still be "contained."

Here is a proof, maybe still not succinct enough for your purposes. Define a reflex vertex as one at which the internal angle exceeds $180^\circ$. The others are convex vertices.

(1) Any polygon must have at least three convex vertices. Let me take this as given.

(2) Therefore a pentagon $P$ can have at most two reflex vertices.

(5) If $P$ has two reflex vertices, they are either adjacent or not. If adjacent, then $P$ is visible from the middle convex vertex $v$ and so star-shaped.

(6) If $P$ has two non-adjacent reflex vertices, then let $a,b,c$ be three consecutive vertices, with $a,c$ reflex and $b$ between them convex. Extend the edges $ba$ and $bc$ until they hit the opposite side. Then any point $x$ on that edge between the extensions can see all of $P$:

This is several years late, but I think I have a nicer proof. I thought I would post it.

Then $v$ sees all three triangles and hence the entire 5-gon. 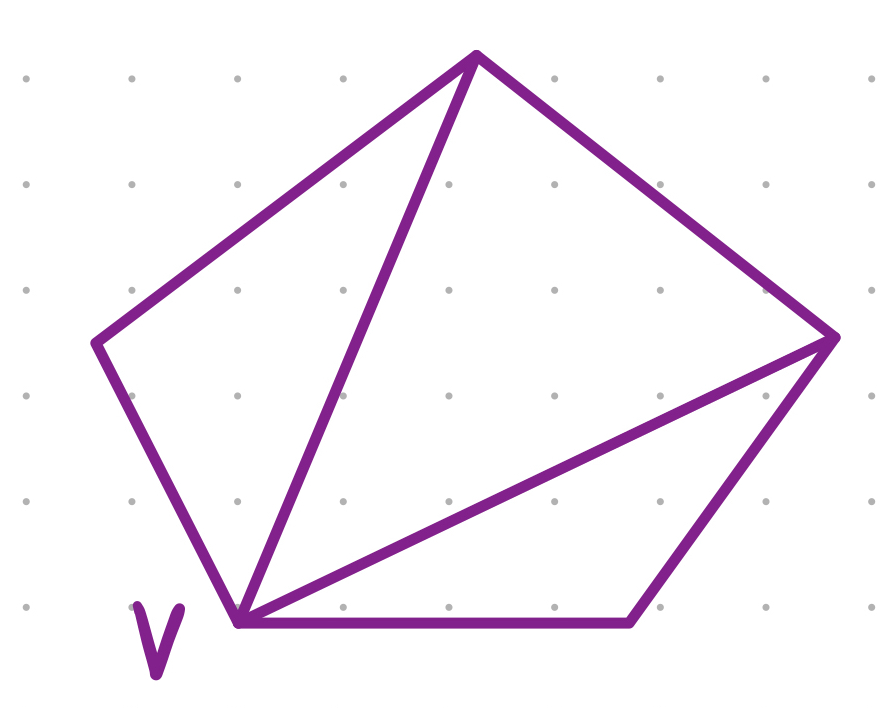 A polygon must have at least three convex vertices (since each convex vertex turns by less than $\pi$ and in total the vertices must turn by $2\pi$). Thus there is at least one vertex that is between two convex vertices. This vertex sees all four other vertices, and hence the entire pentagon.

Not the answer you're looking for? Browse other questions tagged geometry reference-request euclidean-geometry problem-solving or ask your own question.

6
Star-Shaped polygons
3
Does the sum of exterior angles of a simple, convex polygon truly = 360°?
0
Minkowski sum of star shaped polygons
3
Three non-overlapping regular polygons of unit edge-length surround a point. What is the maximum perimeter of their union?
36
A way to directly see that the interior angles of triangle sum to $180^\circ$?
0
Prove that, for any polygon, taking all pair of adjacent angles, subtracting 180 from their sum, and adding all the results together equals $180(n-4)$
1
Why is the sum of all external angles in a convex polygon $360^\circ$ and not $720^\circ$?
1
Exterior angle definition in the case of concave polygons.
3
Can one always tile the plane with a regular polygon + a single other shape?