Periodical reflection conditions in a sphere. 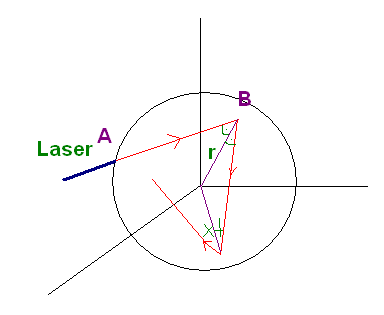 Thanks a lot for answers

Without loss of generality, we can rotate such that $A$ is at the top and the original laser beam lies in the $x$-$z$ plane. Then all the reflected beams will also lie in that plane, and the reflections will all take place on a great circle. Thus the problem is in fact two-dimensional, and we're just asking how a laser beam must be pointed in a circle such that it hits the same spot again. Since all the reflections are at the same angle, the laser beam traverses the same angle $\alpha$ between any two reflections, so the answer is that it must traverse a rational multiple of $\pi$ between any two reflections. Since the angle of incidence it forms with the surface normal on the sphere is $(\pi-\alpha)/2$, an equivalent condition is that the angle of incidence must be a rational multiple of $\pi$.

Not the answer you're looking for? Browse other questions tagged geometry 3d or ask your own question.

4
A light beam between two mirrors.
9
Is it possible to capture a light ray in a solar panel?
2
mirror reflection
8
Reflections on a sphere
1
Reflected rays bouncing in a regular polygon?
1
Reflection of line on a sphere.
10
Reflection inside spherical mirror
10
What would you see inside a spherical mirror?
0
geometry - find the path a light ray must take to reach a destination with one bounce off a mirror