Is there an error in this GRE question?

I was doing a Manhattan GRE practice exam and I was sure I had cracked the twist in this one question... only to find in that there was no twist (apparently). Here is what I know: 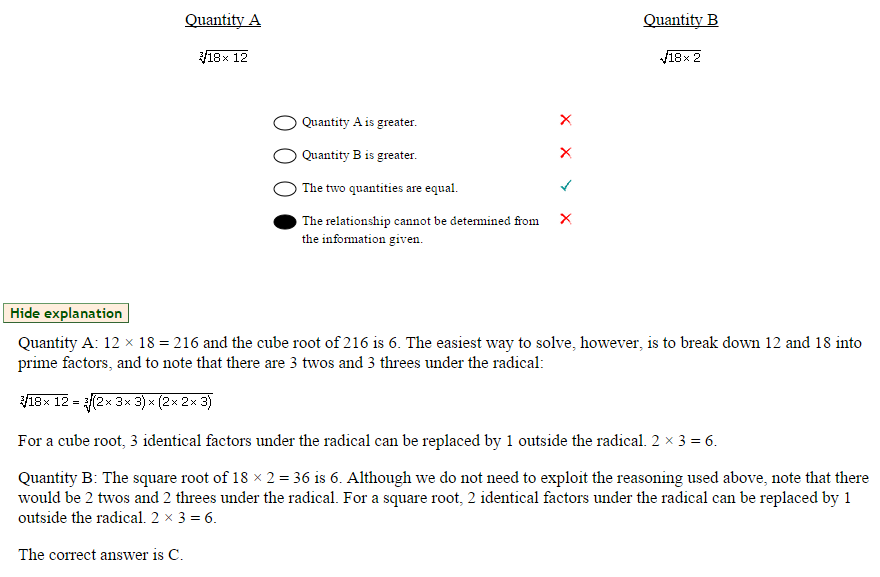 My answer was "the relationship cannot be determined" because for me Quantity A $=6$ while Quantity B can possibly $=\pm 6$. Does anyone know whether my mathematical definition above is correct (and therefore this must be a GRE peculiarity)? Thank you!

There is a convention in mathematics, that the square root is the positive value.

In addition to the other answer(s), here is something specific to the Quantitative GRE (see page 4) about the square root. GRE math conventions:

Basically says what the other answer is, but there could be other conventions that could help you.

You are reasonable to feel uneasy about this. Indeed, in some contexts "square root" (and/or the symbol) means two values, in other contexts it means a non-negative value (if possible... if it makes sense ... if ...)

Since this is a highly artificial environment, and adversarial (rather than cooperative or helpful), the potential trouble is even greater...

The slight trick may be to factor the things to take the respective roots, rather than taking the cube root of 216 by hand. Save a little time? Some people don't know how to take cube roots algorithmically?

But you are right to worry whether this is a "gotcha" situation. The language of the question itself, refering to "quantity A" and "quantity B" in the singular, is encouragement that the plus-minus aspect of square root is not the issue (though, seriously, since the two things are exactly equal, and are integers, one could wonder where the trick-difficulty is...)

Also, assuming for a moment that the plus-minus thing is the issue, the answer "not possible to determine" doesn't make sense... suggesting again that this interpretation is not relevant.

In summary, the interpretation of $\sqrt{x}$ as the non-negative square root of non-negative real $x$ seems widespread, so in such situations, in the near future, you'd bet in favor of that meaning. In real life (as opposed to multiple-choice tests) one would ask for clarification, since square roots have a sense far outside the non-negative real numbers, and even the latter may have to occasionally interact with that larger world.

Not the answer you're looking for? Browse other questions tagged number-theory square-numbers gre-exam or ask your own question.