I don't work (directly) in mathematics (I'm a programmer), but I see numbers every day. Today I came across an issue where some totals were off, and was sent a list of the last 9 examples of the issue. Of course I love numbers and patterns, so I was intrigued: 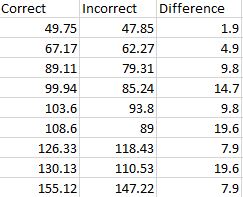 I noticed almost immediately that all 9 of the "Correct"/"Incorrect" pairs had the same decimal value in the hundredths place, and decided to quickly calculate the difference of each in an effort to see some sort of pattern and help lead me to an a-ha moment. Well, we determined that the issue wasn't on our end, however the data was way too interesting for me to simply discard! :D

Two Questions (sorry they are unrelated):

no response about the word anomaly.

Not the answer you're looking for? Browse other questions tagged probability sequences-and-series pattern-recognition or ask your own question.