When do circles on the sides of a triangle intersect?

If you have a non degenerate triangle and two of the sides are chords of two respective circles, then under what conditions do the circles intersect at two distinct points?

I'm having trouble understanding why this condition holds in a step of a proof of a theorem.

Here's the statement and proof of the theorem:

Let triangles be erected externally on the sides of ΔABC so that the sum of the "remote" angles P,Q, and R is 180°. Then the circumcircles of the three triangles ABR, BCP, and ACQ have a common point.

The bolded line is what my question is about. Why is this true in this case, and when is it true in general?

I've thought of a case where this would not be true: if you have $3$ circles tangent to each other and take the triangle formed by connecting the 3 points of contact.

… under what conditions do the circles intersect at two distinct points?

When the two poionts of intersection don't coincide, i.e. if the circles don't have a common tangent. So when do they touch? Two circles which are known to have one point in common are touching iff their centers are collinear with the common point.

Let $F$ be the second point of intersection of the circumcircles of $\triangle ACQ$ and $\triangle BCP$.

This doesn't neccessarily imply distinct: $F$ might well be eqial to one of $A,B,C$. The answer by Jack D'Aurizio covered this degenerate situation in some detail.

… if you have 3 circles tangent to each other and take the triangle formed by connecting the 3 points of contact.

For simplicity take the regular case you depicted, where all three circles have the same size. Then the chords would form a regular triangle with each of the circle centers, which means that another point on the outer arc would form a $30°$ angle with each chord, so the angle sum would be $90°$, in violation to the requirements. 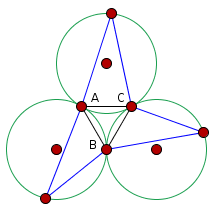 2
How I can show that the point P (Miquel point) is in the circle formed by the centers of the other 4 circles?
1
Proving that $(abc)^2\geq\left(\frac{4\Delta}{\sqrt{3}}\right)^3$, where $a$, $b$, $c$ are the sides, and $\Delta$ the area, of a triangle
3
On a constant associated to equilateral triangle and its generalization.
1
Mobius transformation producing a curved triangle with 3 intersecting circles
2
External and internal equilateral triangles constructed on the sides of an isosceles triangles, show...
7
Geometry - Prove a right triangle resulting from three inscribed circles
1
Constructing equilateral triangles on the sides of a right angled triangle