How many ways would there be of doing this?

The condition is that the vertices must be distinct. In other words, we cannot share vertices.

I have below an example of a 'good' set of triangles. 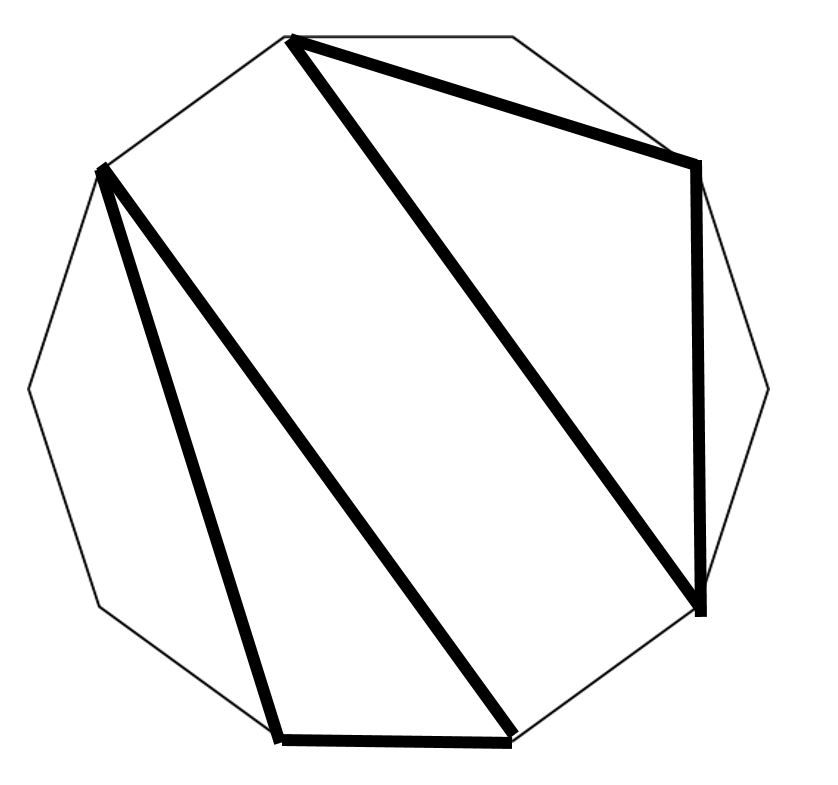 I am not even sure where to begin here.

Assumption : ( we consider that the circular configurations are not the same)

Now It's just a matter of calculations to get the following notes for an $n$-gone :

Finally the answer is :

(If I misunderstood the problem feel free to point it out)

I'm going to assume the following:

Each triangle (like the right-hand one in your picture), when excised from the polygon, leaves behind three smaller polygons, although in some cases (like the left-hand one in your picture), these smaller polygons are vacuous. The "other" triangle of the pair must lie in one of these three remainders, so you get a recurrence: for a fixed "first" triangle, there are $K(a) + K(b) + K(c)$ possible second triangless, where $a$, $b$, and $c$ are the sizes of the three "remainder" polygons. You need to sum these over all possible "first" triangles, and then divide your result by two to account for the arbitrariness of calling one triangle the "first" one.

That's a wicked ugly recurrence, but it's probably not hopeless to at least get a big-O bound in the numbers.

12
How many non-isomorphic ways a convex polygon with $n + 2$ sides can be cut into triangles?
3
K non-intersecting diagonals in a polygon
2
How many different triangles with at least a $3$ vertex side in a $3 \times 3$ vertex grid?
6
How many integer-sided right triangles are there whose sides are combinations?
0
How many ways can $N$ different people select from $k$ different options such that no two people select the same option and $k>N$?
6
How many triangles are there in the 'picture' of $K_5$? Different ways to count it
0
Number of ways in which we can select non-intersecting couples from $n$ elements
4
How many ways to tile a regular hexagon of side length $3$ with “rhomblets” (pairs of equilateral triangles joined along an edge) of side length $1$?
0
Combinatorics: how many unique polygons can be drawn using up to p points along a circle?