There are several models of hyperbolic space that are embedded in Euclidean space. For example, the following image depicts the Beltrami-Klein model of a hyperbolic plane: 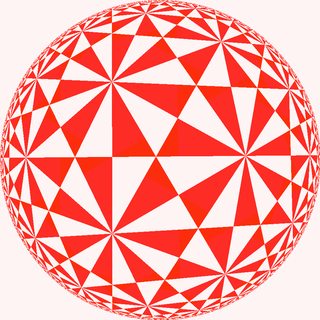 where geodesics are represented by straight lines. The following image, on the other hand, depicts the Poincare model of the same hyperbolic plane: 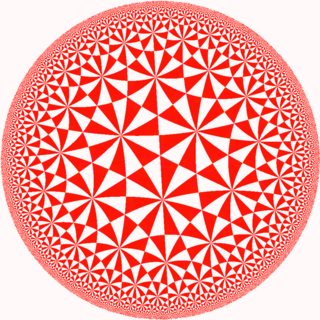 where geodesics are represented by segments of circles intersecting the boundary of the disk orthogonally. Both of these models capture the entire $n$-dimensional hyperbolic space in a disk (or more generally, a Euclidean $n$-ball).

I was thinking about what hyperbolic space would "really look like" from the perspective of an observer within the space. What came to mind was the exponential map, which maps an element of the tangent space $\mathrm{T}_PM$ of a point $p$ on a manifold $M$ to another point on the manifold: 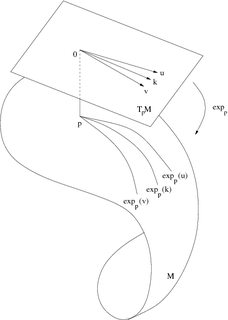 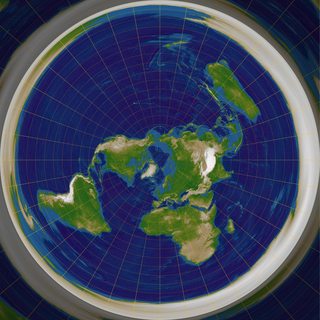 This seems to be what elliptic space would "really look like" from the perspective of an observer within the space, since light reaches our eyes by traveling along geodesics.

This page and this page have demos. You may click around to get a feeling of what moving through an elliptic space would look like, though of course geodesics can go beyond the boundary of the disk in the demo by repeatedly wrapping around the sphere of the Earth.

Given this background, my question is as follows:

What does the exponential map from some point on a hyperbolic space look like, assuming that the contents of the space are depicted by the models above? Are there any demos or examples?

Edit: This question seems to be related.

Edit 2: The last section of this video shows the azimuthal equidistant projection of a hyperbolic plane to be 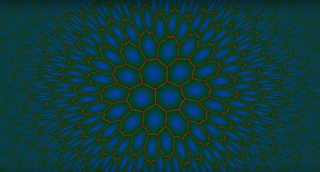 Last edit: Someone made a virtual reality demo of hyperbolic space. This is a definitive answer!

One common way to visualize the "intrinsic appearance" of a simply-connected universe of constant curvature $\pm 1$ is to give the angular size of an object modeled as a geodesic arc of (sufficiently small) length $\ell$ placed at distance $d$ from one's eye. (I didn't try to run the linked applets, and am not sure if either implements this strategy.)

On a sphere of unit curvature, a circle of geodesic radius $d$ has circumference $2\pi \sin d$; an object of length $\ell$ (placed "orthogonal to the line of sight") therefore subtends an angle $\theta \approx \ell/\sin d$. 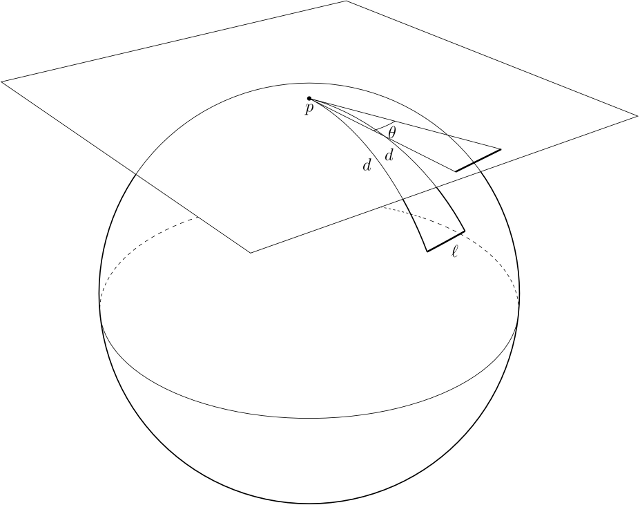 Playing the same game in the hyperbolic plane, a circle of geodesic radius $d$ has circumference $2\pi \sinh d$; an object of length $\ell$ (placed orthogonal to the line of sight) therefore subtends an angle $\theta \approx \ell/\sinh d$. As in mercio's comment, this angle decreases exponentially with $d$.

Jeffrey Weeks' geometry software seems likely to be of interest. His book The Shape of Space (q.v.) is an excellent read.

The Beltrami-Klein model is an accurate depiction of what it would look like in hyperbolic space. To be a bit more precise, if you live in 3-dimensional hyperbolic space $\mathbb{H}^3$, and if $P \subset \mathbb{H}^3$ is a 2-dimensional hyperbolic plane tiled in red and white triangles with angles $\pi/2,\pi/3,\pi/7$ as in the picture shown in the question, and if your eye is situated at a point $Q$ a certain distance from $P$, then what you would see is exactly that picture.

The intuitive reason for this is that geodesics are straight lines, and that is how they appear to your eye.

One interesting feature of this fact is that from $Q$ one can "see" the circle at infinity of $P$, just as the picture shows.

Not the answer you're looking for? Browse other questions tagged geometry manifolds riemannian-geometry smooth-manifolds hyperbolic-geometry or ask your own question.

10
What is the volume of the sphere in hyperbolic space?
2
What 'model' and 'plane' mean in hyperbolic geometry?
2
What does the logarithm of a hyperbolic line look like?