The Statement of Parallelogram law of vector addition is,

But how do we justify that the resultant is along the diagonal? Is it based on experimental evidence, or is it something that can be proved?

I know, the question might sound pretty obvious, but I'm new to this stuff. :)

Let $\mathbf{a}\;,\; \mathbf{b}$ be two vectors & let these constitute the sides of a parallelogram such that they are co-initial from one of the vertices of a parallelogram. So, considering assumption that the law be true(this is what we'll judge now whether by taking the assumption for the validity of the law, we can prove something which is earlier ascertained by elementary geometry), the two diagonals are $\mathbf{a + b}\;,\;\mathbf{b -a}$. Sum of the squares of the diagonals is $\left| \mathbf{a + b} \right|^2 + \left| \mathbf{b - a} \right|^2$. Now, from Euclidean Geometry, we get from Parallelogram law which states that,

This can be proved by inner product or for this case dot product.

First, an important remark. Vectors are mathematical objects, just like numbers, matrices, tensors, groups, manifolds, etc. These things are a part of physics because they happen to be a good model for the physical world, but they are not a part of it. Vectors are not something that exists in physical reality, whatever that might be. So let's separate the math and the physics.

You can define a vector as an ordered tuple of real numbers, or as an arrow in space; it doesn't make any difference because the definitions are equivalent. In the case of an ordered tuple of numbers, addition is defined component wise. If you define a vector as an arrow, then addition is defined either with the parallelogram or the triangle law. These notions of addition can be shown to be equivalent, but I don't think that's the point of your question.

On the other hand, we find that a good way to model the way things move is with forces. Suppose you're floating in empty space near a star. You will feel the force of gravity pulling you towards the star. We can model this force as a vector, where the magnitude and direction of the vector correspond to those of the force, and you can use your knowledge of this force (so far there's only one) to calculate your movement using Newton's law.

Now suppose the star magically disappears and is replaced by a different one, maybe with a different mass and a little bit to the side. Now the force (and its associated vector) points to the new star, and you can again use Newton's law. But what if both stars are present? So far all we know is that it's convenient to represent a force by a vector, but we have no idea what to do when there are various forces. It is found experimentally that when there are multiple forces acting on you, it's exactly as if there were a single force, whose vector is given by the vector sum of the individual forces' vectors.

Although this sounds obvious, it is a nontrivial statement. A priori, who says that multiple forces acting at once are equivalent to a single force? It happens to be true, and that is the reason we say that forces are vectors. 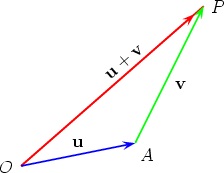 The triangle law of vectors basically is a process that allows one to take two vectors, draw them proportional to each other, connect them head to tail, then draw the resultant vector as a result of the third side that is missing.

The Parallelogram law is just a furthermore explanation of Triangular law,

The proof for the resultant vector in Parallelogram addition is as follows,

Consider a parallelogram $OABC$ as shown in the figure, 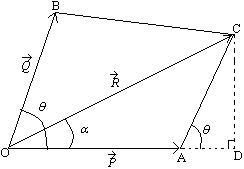 This was already answered, but I figured I'd break it down into more intermediate steps for those who, like me, want to see all of the work.

Repeat these steps using the same reasoning, this time for $\vec{a} - \vec{b}$, and you'll find that the $2(\vec{a}\cdot\vec{b})$ term will disappear, while the other terms will double.

Not the answer you're looking for? Browse other questions tagged vectors or ask your own question.

0
Prooving Kepler's Second Law through vectors.
0
Vector geometry.Geometric Proof for the sum of vectors.
3
Halving a vector and halving an angle
0
How to find the dot product inside of a square
0
Area formed by 3 points in vector
0
Given diagonal vectors, how do I find height of parallelogram?
0
Finding two projections of a vector that their resultant is the first vector
0
Vector Proof of Thébault's Theorem