Symmetric polynomials and the Newton identities

I want to write $P(x,y,z)=yx^{3}+zx^{3}+xy^{3}+zy^{3}+xz^{3}+yz^{3}$ in terms of elementary symmetric polynomials, but I'm getting stuck at the first step. I know I should follow the proof of the fundamental theorem of symmetric polynomials using the Newton identities.

First I pick out the 'biggest' monomial according to the lexicographical ordering: $yz^{3}$. Now I want to rewrite this as a polynomial in the elementary symmetric polynomials. I don't quite understand how to do this.

As I mentioned in a prior post, Gauss's algorithm is the earliest known example of using lex-order reduction as in the Grobner basis algorithm. For a nice exposition see Chapter 7 of Cox, Little, O'Shea: Ideals, Varieties and Algorithms. They also give generalizations to the ring of invariants of a finite matrix group $\rm G \subset GL(n,k)$. Here's an excerpt which, coincidentally, presents this example. You might find it helpful to first read the example at the end before reading the proof. 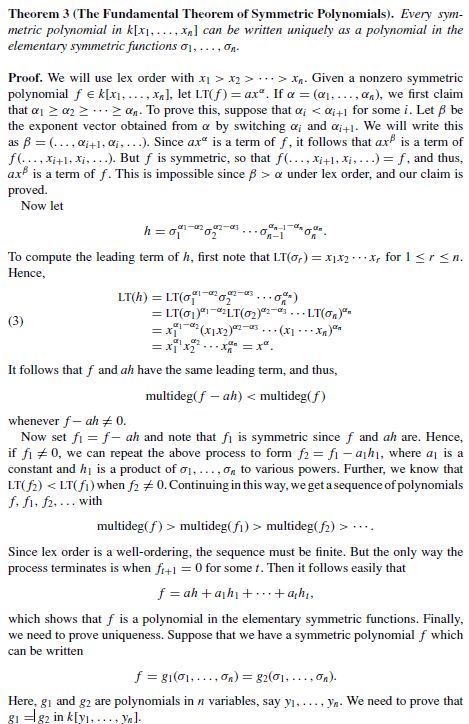 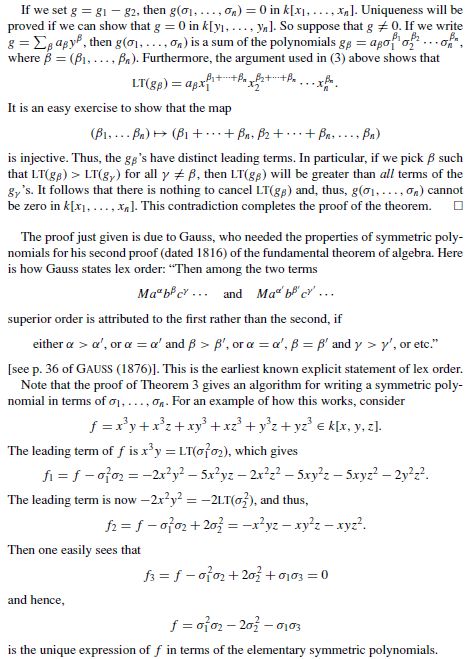 Edit: As per Bill's comment I would like to clarify that this is not related to Gauss' proof.

Now you can use identities for power sums.

Not the answer you're looking for? Browse other questions tagged abstract-algebra polynomials symmetric-polynomials or ask your own question.