This is how it looks like, in the first file there are squares, in the second squares + 1, in the third squares +2, etc. while the values are less than the next square:

C) Finally, $\forall f(a_{ni})$ now it is possible to find the first occurrence of for instance $k=0$ in $f(a_{ni})$. It is found starting from the upper decimal value. The position where it is found is the "escape position", and each position will have its own color.

This is the plotting of colors of each escape position for the algorithm when looking for the first occurrences of $k=0$ in $f(a_{ni})$: 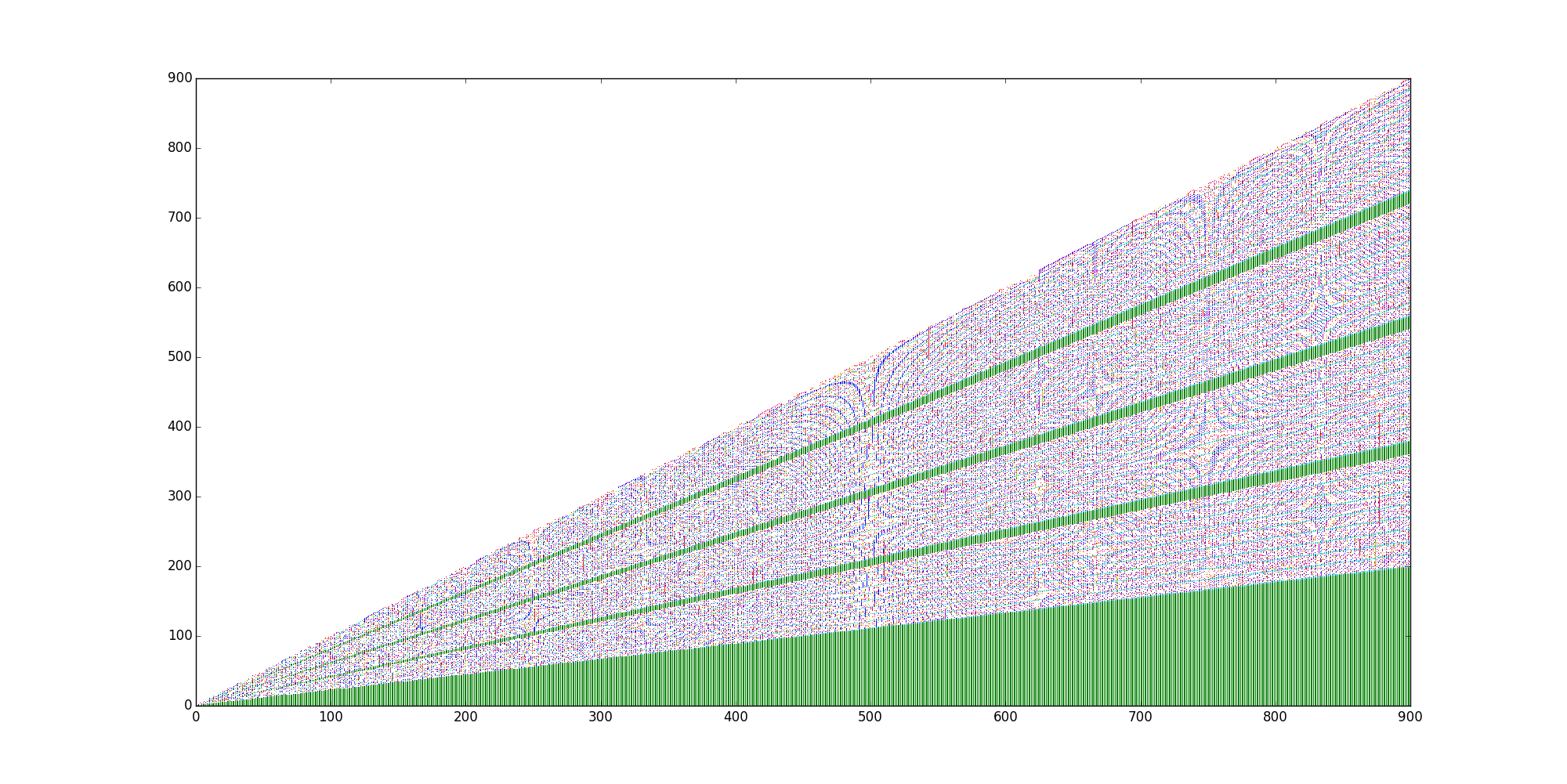 Same exercise for the first occurrences of $k=1$: 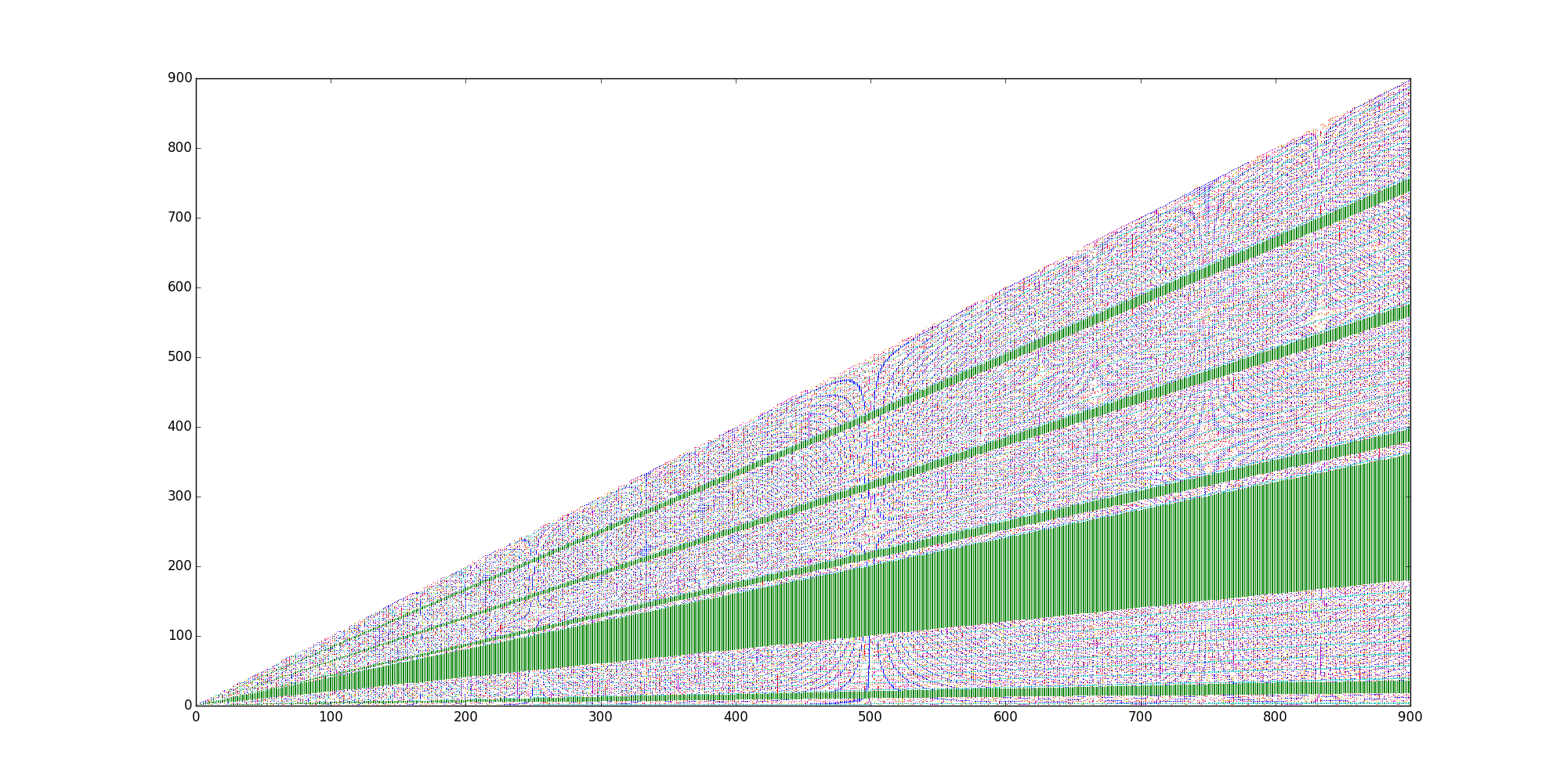 They are very similar, but they are not the same. It seems that there are star-like patterns acting like local "attractors" (please excuse me if I abuse of the terminology).

This is an animated image with the same graph when looking for the first $k=0$, then $k=1$... up to the first $k=9$. Same color in the animation means that the first occurrence of $k$ is in a same specific position. It is reduced to fit the screen, when clicking in the image it is possible to see it correctly:

When looking to the animation, it seems that the first occurrences of each type of $k$ are "rotating" around the "local attractors". E.g. at column $n=500$ is easy to observe the rotation.

I have plotted the images with a gray scale gradient, so now it is possible to see more details of the above rotating picture:

Finally, as $+XY$ is symmetric in $-XY$ this is how it looks like the complete picture, without the restriction regarding the values being less than the next square, so it fills the $XY$ plane completely:

I have been able to isolate the same star-like pattern in polar coordinates $(r,\theta)$ using the same algorithm for a different function. In this case:

The value of the angle in percentage will be the fractional part:

As requested, color codes and explanation about the plotting (initial multi-color graphs above):

if $k$ is not found in the first seven positions, the associated position is the deepest one, $p=7$.

Summarizing: each graph is the plotting of the search of an unique $k$ in all the pairs $(x,y)=(n^2,m)$ of the XY plane (the initial graphs above were restricted to $n^2+m \lt (n+1)^2$, that is the reason why they are triangular graphs and do not fill the whole $XY$ plane). For instance, the first graph added in the question is the search $\forall (x,y)=(n^2,m)$ of the first occurrence of the digit $k=0$ in the first 7 truncated digits of the fractional part of $\sqrt{(n^2+m)}$.

This is not a direct answer to your main question, but it does answer something very important. What is the nature of relationship between taking the fractional part of a number and the mod function?

The trick used here is that we know that fractional part is nothing more than an integer subtraction. That means we can replace the operation with a constant $I$. Now we solve the inequality for m since our goal is to predict $m$ given $n$.

Now we make an ansatz. We'll assume that $I=n+c$. We can justify this choice as follows. Consider,

Since $n^2$ dominates $m$ in the limit, we can neglect the contribution from $m$ for large values of $n$. However, we add a constant $c$ to reflect the fact that $m$'s influence might not be diminished for a while. Substituting this in, we get,

This happens to be an integer, so we'll use it as an approximation for $I$. Think of $c$ as the arbitrary constant from integration. The only difference is that $c$ is an integer.

Note that these are linear functions. This inequality explains everything given that, $p=0$ and we need to find the occurrence of a $k$ digit. For instance, the slope of the lines increases whenever we increase $k$. This explains the behavior you observed when conducting your simulations.

To prove that this inequality always contains an integer $m$, find the width of the interval given by the inequality. The width $w$ is,

By the Pigeon Hole Principle, if the width $w$ is greater than or equal to $1$, the values that $m$ can take on must include an integer. If we set $w=$ and solve for $n$ we get,

So any $n$ greater than the value on the right, will create an interval of solutions $m$ that contains an integer.

I don't know if this will help (or even if it is in your text or links):

Not the answer you're looking for? Browse other questions tagged fractals square-numbers pattern-recognition or ask your own question.

53
What is this pattern called?
51
Fractals using just modulo operation
8
What methods are known to visualize patterns in the set of real roots of quadratic equations?

7
What is the pattern or relation in this table?
49
What exactly are fractals
1
What is the pattern for this sequence?
2
What is the next row of this pattern?
3
What methods are known to visualize the patterns of fractal sequences?
1
Finding a single equation without use of words, only functions and math, that solves outputs patterns within patterns
4
Struggling to Understand Algorithm for Displaying Polynomial Matings with Julia Sets