Why does this “incorrect” Chebyshev function approximation work better than the correct one?

I recently had the need to approximate this function 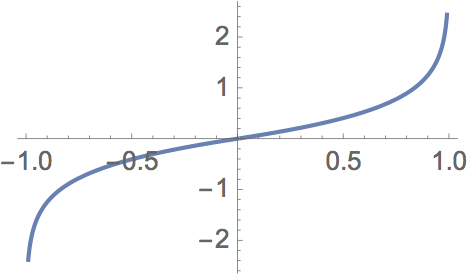 by a Chebyshev series and found something very strange in a popular numerical way of computing the Chebyshev coefficients. There is nothing special about this particular function except that the series converges very slowly due to the function going to ±∞ at ±1. Indeed it is not hard to find functions which have slow Chebyshev convergence—this one also converges slowly due to the discontinuous first derivative at zero: 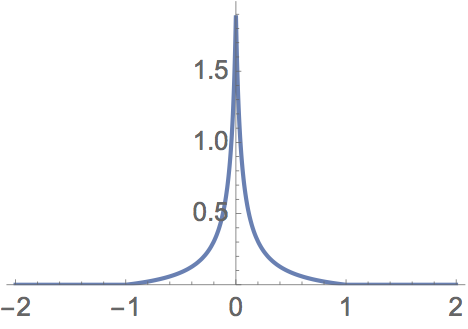 Looking for a way to evaluate series like this that do not involve quadrature lead me to an algorithm in Numerical Recipes, chebft, (scroll to the third page) http://www.aip.de/groups/soe/local/numres/bookcpdf/c5-8.pdf or http://rosettacode.org/wiki/Chebyshev_coefficients. This appears to be essentially identical to the GNU Scientific Library function gsl_cheb_init http://git.savannah.gnu.org/cgit/gsl.git/tree/cheb/init.c.

The Numerical Recipes book—but not the GSL docs—are very clear that this routine works only if the series converges quickly; if that is the case, one computes the series to a "high" order $N$ which is essentially exact in its approximation and then truncates that series to the first $M$ coefficients. The assumption is that the truncated terms will be neglible.

This is great except for these slowly-converging series which can require hundreds or thousands of terms to converge to say five significant digits of the true coefficients as computed by e.g. an exact closed-form expression for $f(x)$ which happens to involve the sine integral.

FOLLOWING IS THE CRUX OF THIS NOTE.

(1) Run one of these routines, chebft or presumably gsl_cheb_init, using a "high" order $N_1$, then examine the first $M < N_1$ coefficients. Then run the routine again with a significantly larger $N_2$, and again look at the first $M$ coefficients. They are different, in some instances by quite a bit, especially in those of order approaching $M$.

(3) Implied in (2) is this: Using $M = N_1$ coefficients gives a much better approximation than using the first $M$ coefficients of the actual Chebyshev series if $M$ is "small!"

Here is an example for $f(x)$ above. The even-order coefficients are zero. First, the coefficients are listed then plotted as 20*log10(abs(coefficient)), that is, decibels or dB, then the difference between $f(x)$ and its approximation using the listed coefficients is plotted. 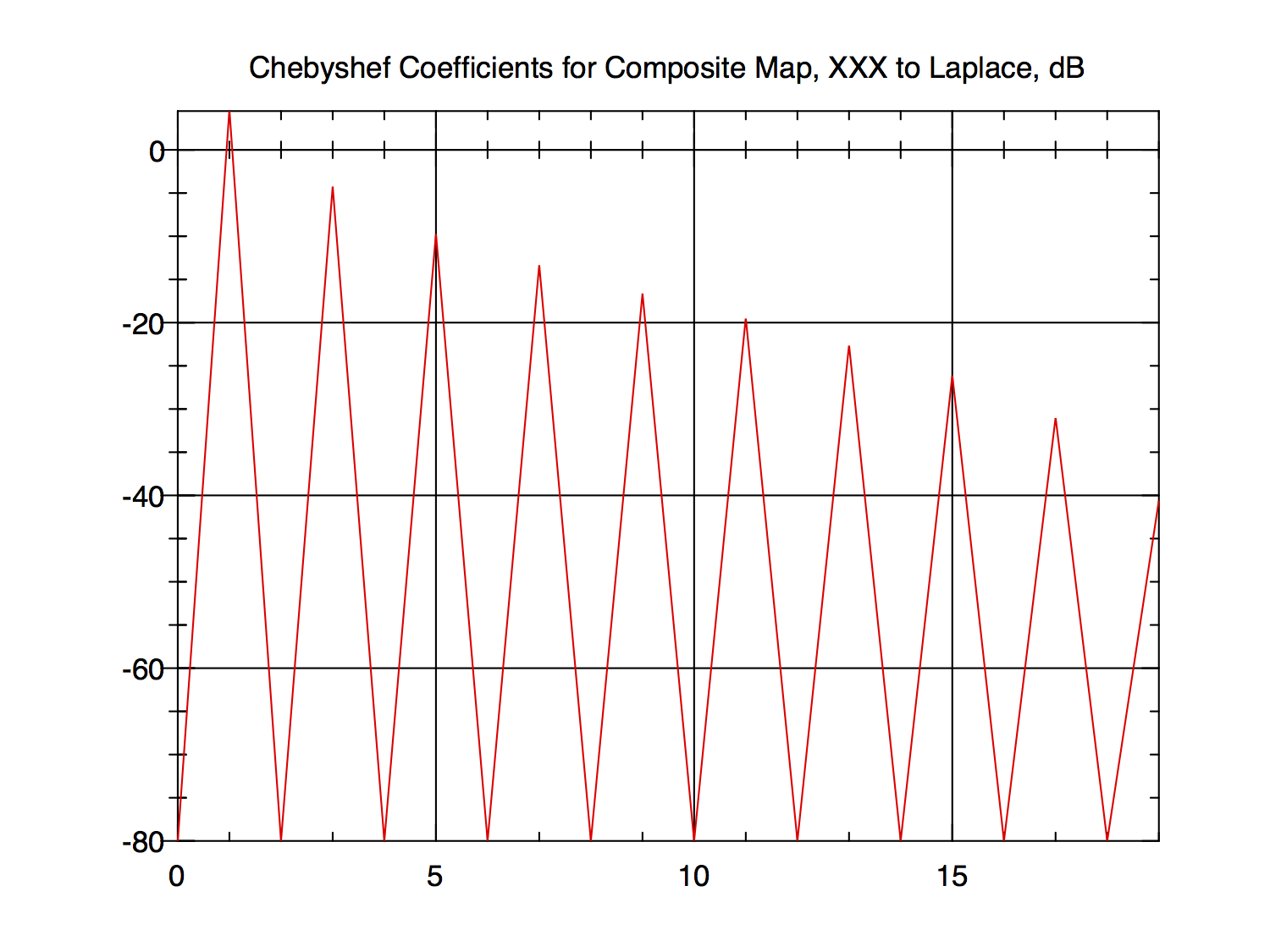 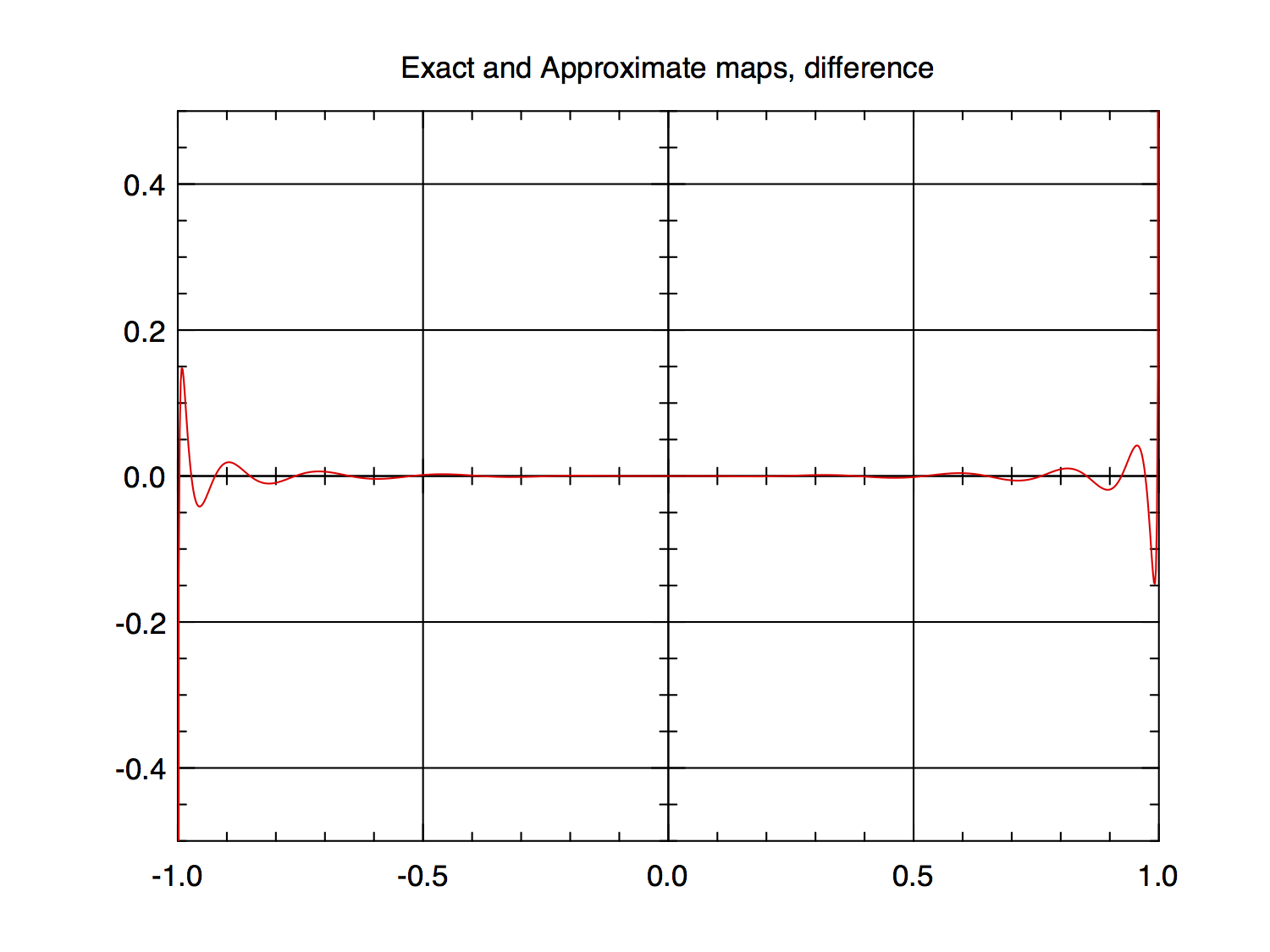 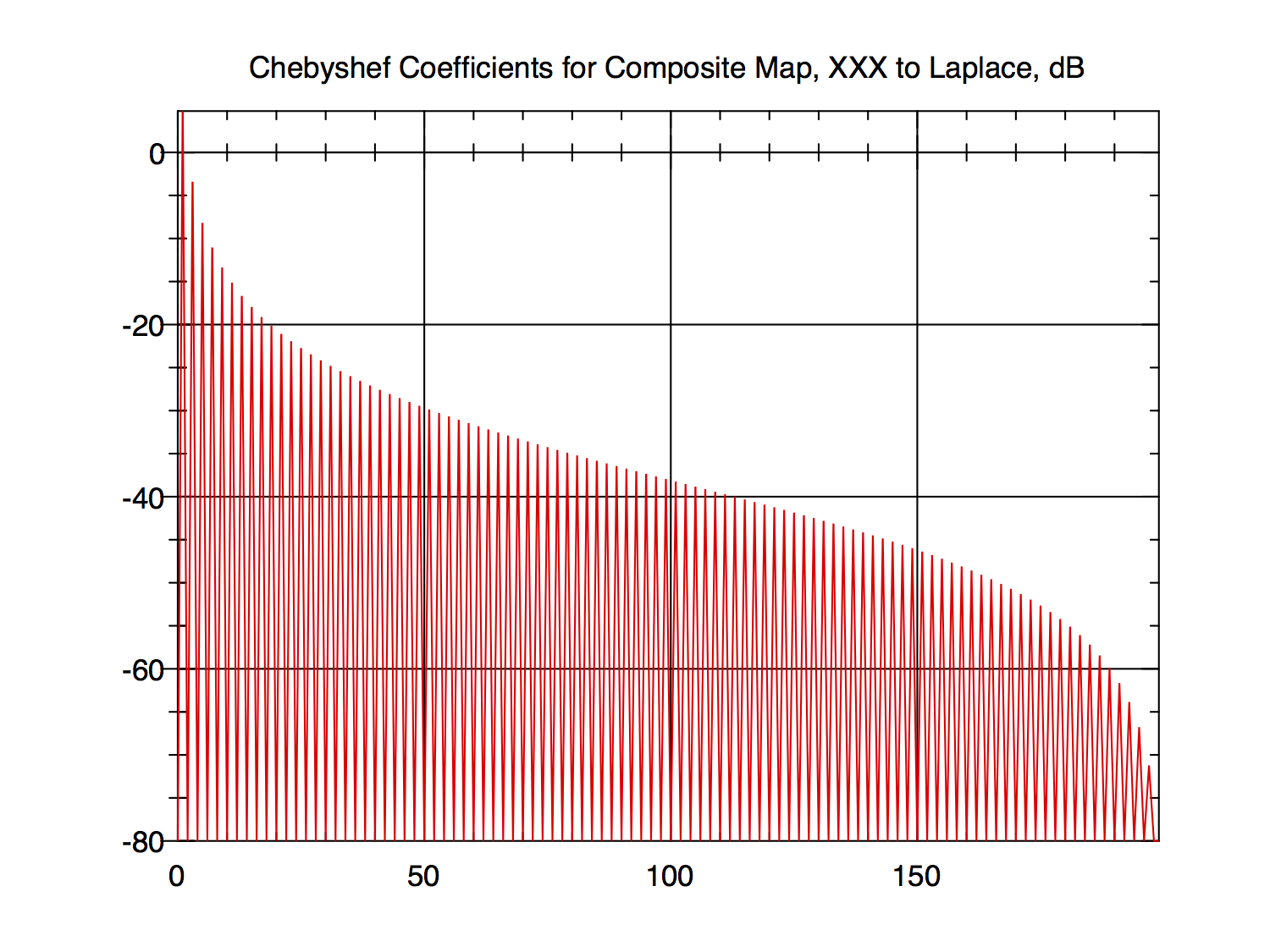 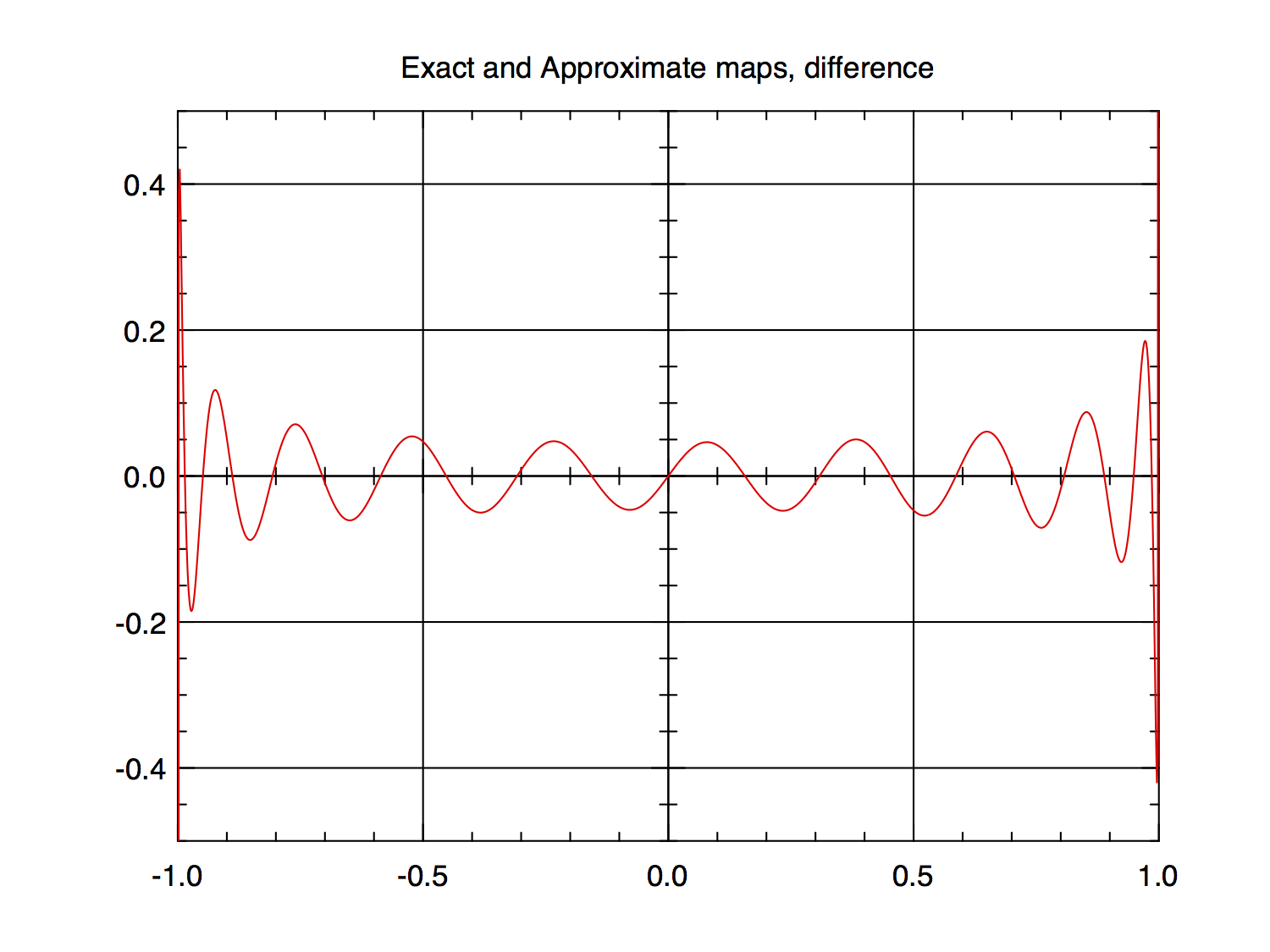 The error plots are clipped at $±0.5$ so there is the possibility that I have chopped off something important, especially since I stopped the plot at $1.0e-12$ inside of $±1$ to prevent blowing things up. The non-clipped plot for $N_1=19$ shows the error there to be about $±24$ with the $N_2 = 199$ version being slightly smaller, about $±23$; so there is the slight possibility that the vast majority of the error has been hidden in this extremely small region near $±1$. However, $g(x)$ generates very similar (in nature) coefficient and error plots in showing this phenomenom but with slow convergence near zero and it has no infinities that I am "hiding".

Here are the first 19 coefficients computed from the sine integral that Mathematica discovered for me—they should be the exact Chebyshev coefficients for $f(x)$:

Why does this happen? Why do these incorrect series coefficients for rather severely wrong Chebyshev approximations do such a better job at approximating the underlying functions, at least in these case of slow Chebyshev convergence? Does the taper in the $10$ percent of the RHS of the plots amount to a windowing effect as is well known in time series and signal processing? I have not tested this on any "fast-converging" cases.

Does anyone have an explanation for the unexpected good performance of this "new" series inadvertently provided by these canned routines? Is the $M=N$ usage optimal in any sense?

I apologize for the length of this post especially if I have treaded upon some protocol or courtesy—I'm new to the world of Stackexchange.

Browse other questions tagged numerical-methods chebyshev-polynomials or ask your own question.

33
Why does Monte-Carlo integration work better than naive numerical integration in high dimensions?
3
Why might one be inclined to think that polynomials of the form $\cos(n\arccos{x})$ would minimize error in Lagrange interpolation?
1
Numerical estimates for the convergence order of trapezoidal-like Runge-Kutta methods
3
The rate of convergence for polynomial interpolation of different functions
0
Numerical solution to 2nd order ODE - where does this approximation come from?
0
Chebyshev approximation - from any equation