Confusion with the eccentricity of ellipse

Confusion with the eccentricity of ellipse. On wikipedia I got the following in the directrix section of ellipse. 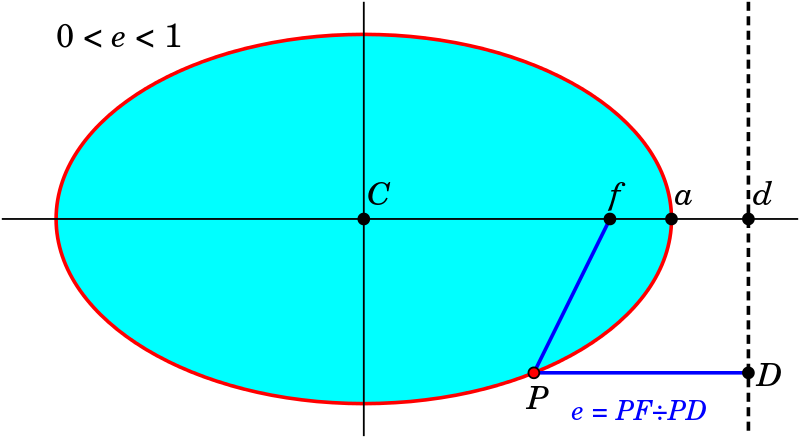 In my book it was only given that $e=f/a$ (in my book there is nothing given about directrix of an ellipse).

So far, the above has nothing to do with the directrix. It's just a way to construct the foci and find the eccentricity, starting from some equation and then requiring that the curve described by that equation must have the fundamental property of an ellipse (namely, that the sum of the distances from any point on the ellipse to the two foci is a constant).

With this choice, it's then not hard to show that the terms not written above also vanish so, indeed, $$ \epsilon = \frac{\overline{PF}}{\overline{PD}} $$ is true, provided we make that choice for $d$.

(Technically, I only proved that (A) above implies (B). We'd also have to prove that (B) implies (A) for the equivalence I referred to be proven. That's an exercise I leave for the reader...)

The ellipse can also be defined as the locus of points whose distance from the focus is proportional to the horizontal distance from a vertical line known as the conic section directrix, where the ratio is $<1$. Letting $e$ be the ratio and $d$ the distance from the center at which the directrix lies, then in order for this to be true, it must hold at the extremes of the major and minor axes, so

With a bit of solving, you get

In this proof, you can see that we have derived d and e from the extremities, since their values are easily available. For the $\frac{PF}{PD}$ ratio, you can put $PF = a - c$ and $PD = d - a$ (similar to what we did for finding d and e).

Hint: If the eccentricity $e$ & the major axis $2a$ of an ellipse are known then we have the following