The case of Captain America's shield: a variation of Alhazen's Billard problem

I'm sure a lot of you are acquainted with Alhazen's Billiard problem, which involves finding the point on the edge of a circular billiard table at which a cue ball at a given point must be aimed in order to canon off the edge of the table and hit another ball at a second given point.

While reading on this math problem, I thought of my favorite Marvel superhero, Captain America (Cap'). You may also know that Cap' has a special ability in which he is able to throw his shield in way so that it will ricochet off certain objects and return to him. Let's examine a scenario that places him in the context of the Billiard problem:

Cap' is standing at point C in an empty circular room. (Point C is not at the centre of the room, because if so he'd be able to throw the shield in any direction and have it bounce off the wall and return to him, since any trajectory would be the normal to the tangent at the point where the shield hits the wall. C is also not on the edge of the circle because that would lead to a trajectory based on inscribed polygons.)

At point C, to have the shield return to him with 1 richochet, all Cap' needs to do is similarly throw the shield along the line of symmetry of the room that passes through C, so we'll constrain his aim to a point not on that line of symmetry, which means we'll be looking for 2 ricochets or more.

These are the scenarios I'd like you all to consider:

Where should Cap' aim to have the shield return to him in:

Edit: From the answers I've read and my own working, I believe there is a pattern for trajectories with either odd or even bounces. It would be nice if someone could algebraically find a generalized way to compute the coordinate of the ricochet point given the number of times we want the shield to bounce off the wall before returning.

Note: For sake of mathematical analysis, let's assume the shield (a point mass) always moves in a straight line, does not lose kinetic energy and obeys the Law of reflection (angle of incidence = angle of reflection.)

This is basically a long comment about OP's linked solution to the $2$-ricochet case: You're right, it's a "mess". :)

Don't feel too bad, however. It took me a couple of tries to find a clean approach. A first attempt involved an irreducible cubic; the second, a cubic with an extraneous linear factor. However, a little perseverance and geometric insight finally got me to just the core quadratic relation. 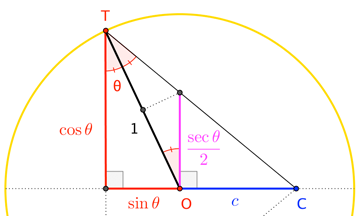 Here, $T$ is the first ricochet point (the second being the reflection of $T$ in $\overleftrightarrow{OC}$), and necessarily-acute $\theta$ is both the angle of incidence and reflection of the shield bouncing off of the wall at $T$. Similar right triangles in the figure give us this relation:

Not the answer you're looking for? Browse other questions tagged geometry trigonometry algebraic-geometry recreational-mathematics triangles or ask your own question.

3
Variation of the inscribed square problem
0
The Sine Law: A Simplified Criterion for the Ambiguous Case?
0
Billiards in a circular table
1
Why does the maximum of all the trigonometric functions in the case of a triangle always exist in the case of an equilateral triangle?
2
Infinite hat problem error upper bound, in the case of seeing all other prisoners
1
Ambiguous Case Triangle Problem
1
Take a square and a ray that will bounce off the walls of the square, and determine what points have an unbounded distance from the initial point.