This question is from the 2009 Canada National Olympiad.

I would be grateful for any suggestions on:

The notion of limiting triangle is important because there is then a unique circle that covers the triangle; the circle will not cover the entire triangle if it is translated by any nonzero amount in any direction from the covering position.

By comparison with a right triangle whose longest side is on the diameter of the covering circle, we see that any triangle with a diametral side will have its other vertex outside the circle if and only if the angle at this vertex is $<90^\circ$, and will have its other vertex on or inside the circle otherwise. So a right or obtuse triangle can be covered by a unit circle if and only if its longest side is $\le 2$ units in length. The longest side is the sole limiting feature of a non-acute triangle. 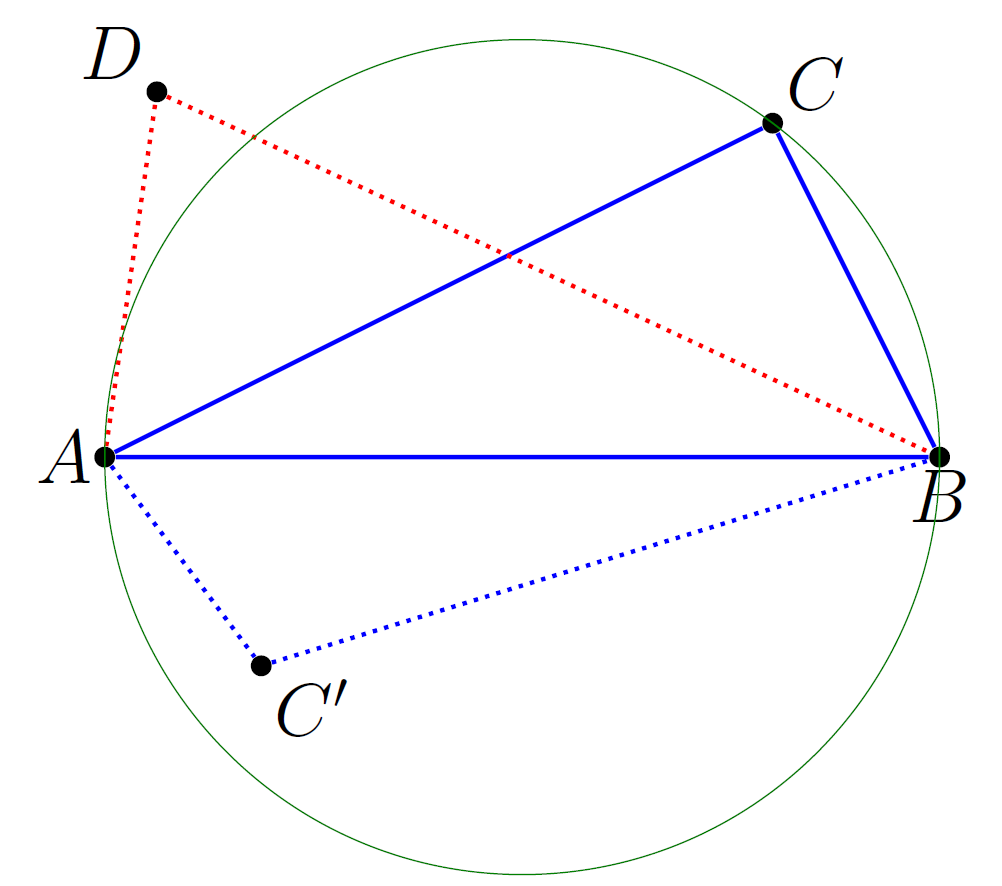 Then if any other point (say $D$) is outside the circle with diameter AB, we have a triangle $\Delta ABD$ that cannot be covered by a unit circle (because $AB$ is limiting), which contradicts the original stipulation that any three points forms a triangle that is coverable. Hence, there are no points outside the unit circle with $AB$ diametral.

What suggestions for making the above argument more rigorous?

When the limiting triangle is acute, its circumcenter will coincide with the center of the covering circle.

We first need to prove:

Lemma 1: If a triangle is acute and all its vertices lie on a circle, then no larger circle can cover the triangle.

With reference to the diagram below, for an acute triangle the circumcenter is inside the triangle. If the covering circle is translated in a direction that is not aligned with, say, $AB$, then it will need to move in a general direction away from vertex $C$, as indicated by the arrows. It is impossible to satisfy all three sets of requirements (relative to all sides), so the covering circle is unique and the triangle limiting. This argument relies on the circumcenter being inside the triangle, and hence does not work for obtuse triangles (nor should it). 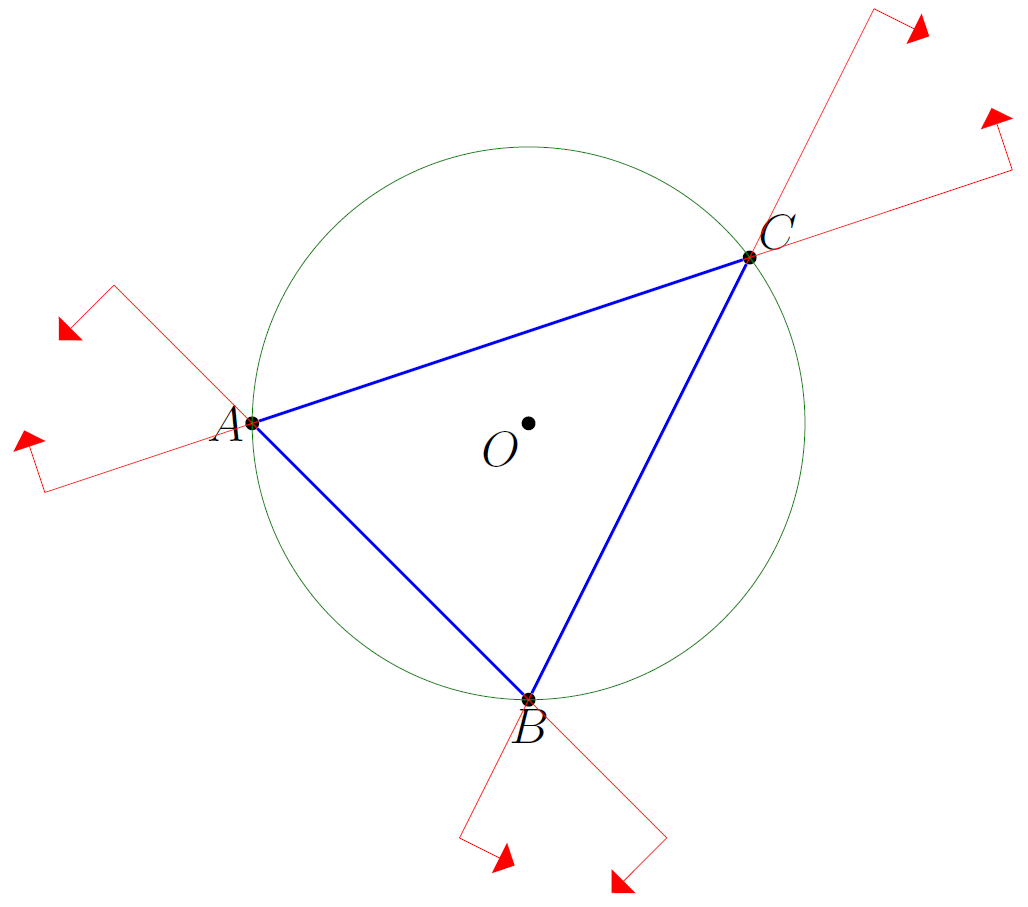 This proves the lemma.

What suggestions for making the above argument more rigorous, or streamlining it? 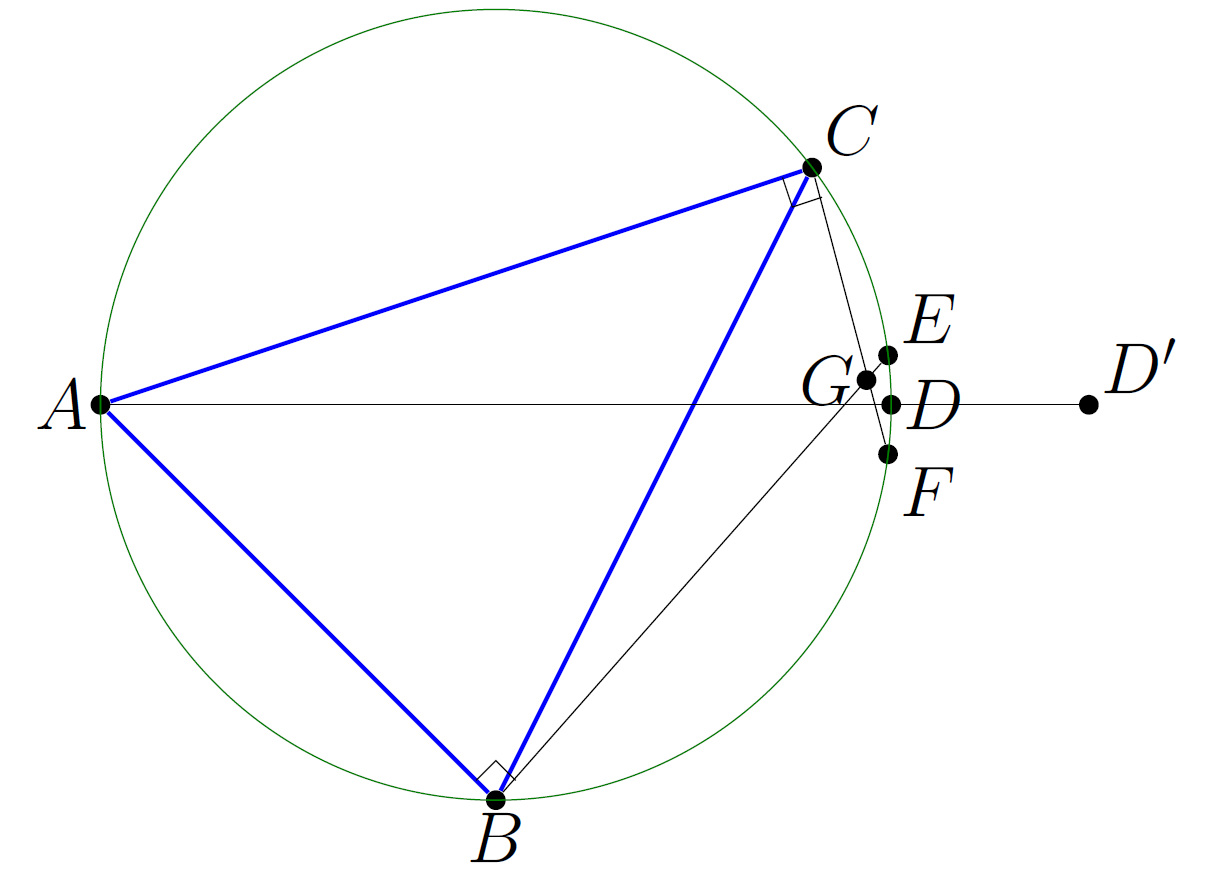 Prove by contradiction. Suppose WLOG that $D\in\text{arc}\stackrel{\Large\frown}{BC}$. Suppose also that perpendiculars to $AB$ and to $AC$ cross at point $G$ inside the circle, and that $D\in\text{arc}\stackrel{\Large\frown}{FE}$ as shown, so that it not possible to find an acute (or right) triangle having $D$ as one vertex and having one of the sides of $\Delta ABC$ as a side.

But in quadrilateral $ABGC$, for one pair of opposite angles $\angle ABG = \angle ACG = 90^\circ$, so $ABGC$ is a cyclic quadrilateral. So point $G$ is on the same circle as points $A,B,C$ thereby showing that points $E,F,G$ coincide.

HINT: Consider the unit disks with centers at these points. Any three of them intersect. Now use Helly's theorem.

Not the answer you're looking for? Browse other questions tagged geometry proof-verification contest-math or ask your own question.

5
Forbidden zones for circumcenter
7
Construct a triangle with its orthocenter and circumcenter on its incircle.
2
Minimal-area rectangle, bounding (covering) an acute triangle
0
Arc vs Arc Measure
6
Point in triangle with maximum distance from vertices
1
Altitudes and Circumcircle
1
prove that the three points are collinear
2
Show that angles are equal in a circumscribed circle
1
$\triangle ABC$ and a circle $k(O; d=AB)$
7
Prove that $\angle ABC <$ $ 84^\circ$.