If a 1 meter rope is cut at two uniformly randomly chosen points, what is the average length of the smallest piece?

If a $1$ meter rope is cut at two uniformly randomly chosen points (to give three pieces), what is the average length of the smallest piece?

I got this question as a mathematical puzzle from a friend. It looks similar to MathOverflow question If you break a stick at two points chosen uniformly, the probability the three resulting sticks form a triangle is 1/4.

However, in this case, I have to find the expected length of the smallest segment. The two points where the rope is cut are selected uniformly at random.

How do I solve this problem?

My approach is maybe more naive than the others posted.

Update: The current version of this answer is more intuitive (IMHO) than the previous one. See also this similar answer to a similar question.

The generalization of this problem to $n$ pieces is discussed extensively in David and Nagaraja's Order Statistics (pp. 133-135, and p. 153).

David and Nagaraja also give the formula Yuval Filmus mentions (as Problem 6.4.2):

Note that equivalently we could throw $n$ random points on a circle of unit circumference and consider lengths of segments on the circle.

Derivation of the formula for the smallest segment

Use the same method and come up with one more equation that will enable you to find this unknown.

Maybe this geometric argument clarifies the intuition. For convenience, assume we are looking for average value of the maximum.

If you think of this as uniformly randomly choosing points from $[0,1]\times[0,1]$ and break the square into the triangles sharing the diagonal $y=x$, the expected value can be expressed as twice the integral of the function $f(x,y)=\min(x,y-x,1-y)$ over the region $0\leq x\leq y\leq 1$. You can use explicit formulas for the minimum value of 2 numbers to compute the integral. There is probably a lot more simplifying that can be done. If this seems too tedious, it is at least something you could put into Mathematica to find the answer.

Hans and Jonas pretty much tell you how to do it. You are basically trying to calculate the volume on the square with side 0:1, and coordinates of each of the random variables, and height equal to the minimum segment. So you have several regions, as shown by Jonas, each of which you could obtain an analytic integral for. There will be symmetry above/below the diagonal, so you can compute just one and double it. The problem is it is quite a bit of algebra, and it is just too easy to make a mistake. A wrote a simple monte-carlo program, pich two random values, r1,r2, compute the minimum, and do this N times. My results for the differing values of N: n=1K .111988 n=10k .111647 n=100k .111101 n=1m .111298 n=10m .111121 n=100m .111129 n=1G .111111 So it sure seems to be converging on 1/9. Monte Carlo, is a good way to gain confidence in your result, i.e. if you did an analytic solution and it agrees with the Monte Carlo result, it is probably correct. If it doesn't agree you have probably made a mistake. Programming the Monte Carlo for this problem only took a few minutes.

The picture clearly shows the triangles which we can integrate to get the expected value. 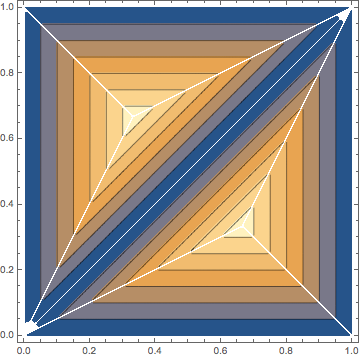 This borrows from previous answers

To provide a guideline (and avoid any solution not providing reasonable numbers):

Average of any piece:

The solution proposed by Yudong Tang is in line with the data, and uses convex polytopes, that are easy to visualize and generalize.

Not the answer you're looking for? Browse other questions tagged probability expectation or ask your own question.

2
Geometry and PDF around the unit stick broken into 3 pieces and the expected length of the longest piece?
1
A Probability Variation of the Broken Stick Problem
0
We break a unit length stick at two randomly chosen points
1
Cutting a rope randomly and taking the longer piece, cutting the longer piece and taking the shorter piece.
0
A bar of length t is broken into 3 pieces at 2 random points, what is the probability that the shortest piece is shorter than 0.1t?
2
Rod cut at two points, expected length of largest part
4
Uniformly at random, break a unit stick in two places. What is the probability that the smallest piece is $\leq 1/5$?