The objective of this post is to state that:

1) the Poincaré hyperbolic metric results in a solution of complete geodesic circles in both half-plane and disk models.

2) the choice of one or other is quite arbitrary.

3) while for the half plane model negative side arbitrariness provides no new solution or insight, the disc model hyperbolic geodesic proposed outside the horizon/boundary can be validated in full.

The derivation of geodesics of the two models follows in a straightforward manner from the metric.

For the half-plane we have in Cartesian coordinates

where $2h$ is an integration constant.

which are all all full circles centered on x-axis and lying on either side of x-axis. Argument about distances. Whether we approach from below the x-axis or from above, x-axis is at an infinite distance so lower symmetric half part may have been excluded (by Poincaré). Distance to points on x-axis is infinite whether we take the upper half or the lower, it appears to be entirely arbitrary. I.e, either of them could serve as a valid geodesic model.

But **the disc model has no such direct reflective symmetry, but possesses definitely an "inversion symmetry" arising from same metric **.

Similarly for the disc in Polar coordinates (primes with respect to $\theta $) we land into a situation for an arbitrarily forced choice of range.

Where $T$ is a more convenient symbol for the radius of fundamental circle than unity as we shall see..

and after error indicated by $A.\Gamma.$ corrected it leads to

Using substitutions of (12) and (14) we get Equation (15) that is an ODE of product of segments constant property for an entire circle. At tangential point $T$ where $\psi =0, \pi $ we have the horizon/boundary circle $r=T.$

which are orthogonal red trajectories to unit "horizon" circles obtained by integrating this ODE. However they are these orthogonal hyperbolic geodesic circles on either side of the horizon or boundary. 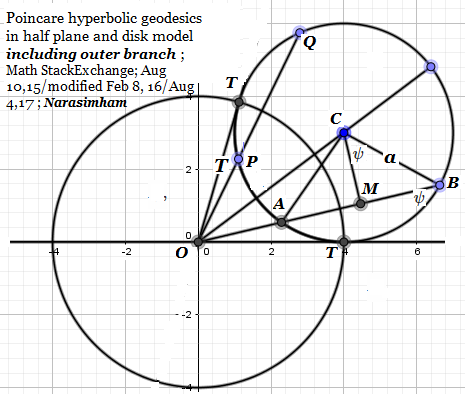 It is well known that the half plane model is a special case of disc model where unit disc radius tends to $ \infty$.

Why Poincaré had deemed the portion of the red circle lying outside the horizon as not belonging to $ \mathbb H^2 $ .. is to me not clear, so the question here.

( .. In response to (since deleted) workaholic's request for showing the above to be hyperbolic geodesics by integration)

Direct integration is needlessly cumbersome and when direct methods are yielding the result readily.

A second way is the following. In the diagram above let

where $a$ is another convenient arbitrary constant.

Note that the central circle has a radius $=T$ which is tangent to all arbitrary circles of radius $a$. If inversion circle/mirroring circle has radius $T,$ the inner hyperbolic geodesics are inversions of outer geodesic circles (and vice-versa) now brought into picture.

where by geometry of differential right triangle

which relation is readily recognized as the Circle property that product $T^2$ of the two cutting segments on circle is square of tangent $T$ or its power.

Alternately in a third method we can get the above into Liouville's form for $2D$ curvature by differentiation with respect to arc and simplifying:

and apply Euler-Lagrange theorem of calculus of variations

where wlog the constant is taken as reciprocal of diameter $2a.$ Simplifying,

Since in differential form we can plug in from (14)

(20) simplifies to an eccentric circle radius $a$ and power $T$ which is the arbitrary hyperbolic geodesic:

BTW, the name geodesic has been introduced by Liouville.

Thus we have circles of arbitrary radius $a$ orthogonally cutting $T$ radius as valid Poincaré disk model in $ \mathbb H^2 $ on either side of the boundary circle which is hence no truncated geodesic arc in this sense, considered from Poincaré's defining metric. Either side/segment is equally valid.

All points outside the horizon are at an infinite distance to the horizon along the given external geodesics $TQB$ as well. 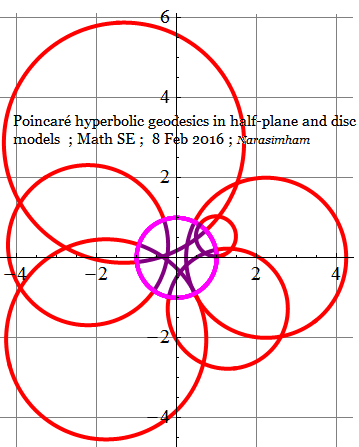 Finding Euclidean distances in the eccentric circle orthogonal to the hyperbolic boundary circle as:

So the metric can be defined to work both ways

A diameter of the boundary circle maps to line at infinity in inversion.

Plugging in from (27) these hyperbolic distances are respectively:

Cross-Ratio is same for inner and outer hyperbolic arcs

Cross Ratio of a pencil of four concurrent rays depends upon angles enclosed between them...as it is one valid way to define them. Whether the transverse cutting is by a straight line, a circle cutting them inside the tangent points as in case of standard Poincaré model or cutting them outside of the tangent points as in the model presently being proposed is hence one and the same.

When the Poincaré arc/geodesic shrinks to zero size, then in the limit a circle passing through the pencil point of concurrency on its arc anywhere stands as a valid and simple hyperbolic geodesic. It forms a special case when $T=0,\sin \psi= r/2a$ ... and yet another special case when touching externally..

Not the answer you're looking for? Browse other questions tagged differential-geometry calculus-of-variations hyperbolic-geometry or ask your own question.

3
Gauss Bonnet theorem validation with hyperbolic circles
0
How could you extend hyperbolic geometry beyond the edge of the Poincare disk?
1
Why is the limit set a disk and yet it's also a sphere?