This exercise is from a past admission exam to an Italian institute:

Among all the triangles that contain a square of side $1$, which ones have minimum area?

I have solved it, however I'd like to know if there is a faster/easier way. Here's my solution.

For the sake of minimality, the triangles whose perimeter contains all the vertices of the square are to be considered: the ones sharing an angle with the square, whose hypotenuse passes through a vertex $M$ and gives two right triangles intersecting the axes; and the ones whose base passes through two vertices and whose legs pass through the other two. We will deal with them separately and then compare the areas.

As for the other class of triangles: 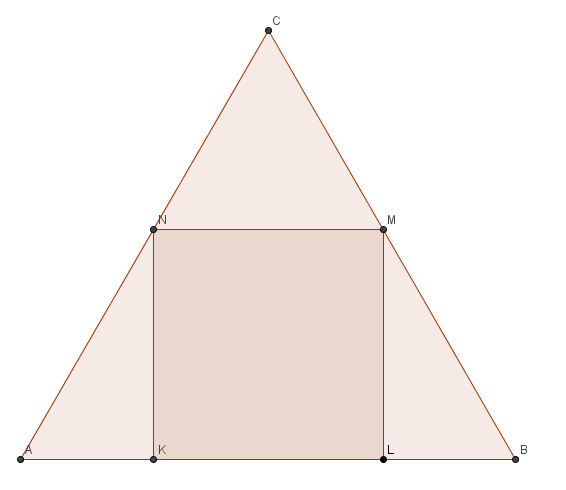 Could I have known beforehand which of the two classes was the minimizer?

You do not need to separately consider two cases. Consider the height $h$ of the triangle $CNM$

The area of $CAB$ is determined by its base and height.

Using the similarity of $CNM$ and $CAB$, the base $AB$ of the triangle $CAB$ is

The minimizing height $h$ is $1$ by AM-GM inequality.

Not the answer you're looking for? Browse other questions tagged geometry optimization proof-verification triangles alternative-proof or ask your own question.

19
Maximum area of a square in a triangle
6
Maximal area covered by two triangles in unit circle
2
Finding the area of a triangle, given the distance between center of incircle and circumscribed circle
0
Find the triangle with the greatest area using trigonometric ratios
1
Constructing a square from the difference of diagonal and side
1
Triangle: Find area given 2 side lengths and that two medians are perpendicular
1
Among all the triangles containing a square of side 1, which ones have the smaller area?
1
Ratio of 2 Triangles to Inscribed Square in a Right Triangle