The following appeared in the problems section of the March 2015 issue of the American Mathematical Monthly.

The deadline for submitting solutions was July 31 2015, so it is now safe to ask: is there a simple solution? One that doesn't involve elliptic curves, for instance?

(Edit at the bottom.) Here is an elementary way (known to Fermat) to find an infinite number of rational points. From $a+b+c = abc = 6$, we need to solve the equation,

Using any non-zero solution $a_0$, do the transformation,

Assume it to be a square,

Expand, then collect powers of $x$ to get the form,

and you have a new rational point,

where the denominator $d$ is a large integer too tedious to write.

Conclusion: Starting with a "seed" solution, just a few iterations of this procedure has yielded $a_i$ with a similar form $6n^{\color{red}2}/d$ that grow rapidly in "height". Heuristically, it then suggests an infinite sequence of distinct rational $a_i$ that grow in height with each iteration.

$\color{blue}{Edit}$: Courtesy of Aretino's remark below, then another piece of the puzzle was found. We can translate his recursion into an identity. If,

then subsequent ones are,

As with the recursive construction given by Tito Piezas III, the construction of $T$ via tangents to a cubic is an example of a classical technique that has been incorporated into the modern theory of elliptic curves but does not require explicit delving into this theory. Also as with TPIII's construction, completing the proof requires showing that the iteration does not eventually cycle. We do this by showing that (as suggested by the first three steps) the solutions $(a_i,b_i,c_i)$ get ever more complicated as $i$ increases.

The same technique works with TPIII's recursion, which has $d=9$. 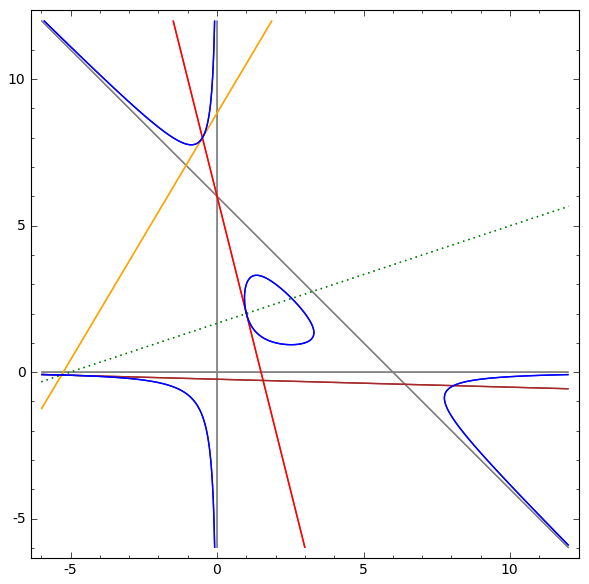 A blunt way to finish is to note that this curve is birational to the elliptic curve $$y^2=x^3-9x+9,$$ of positive rank, so indeed there are infinitely many rational solutions.