Do 4 points in ${\mathbb R}^2$ in convex position define a unique elliplse that passes through those 4 points?

So it takes 3 distinct points in the plane, that are not collinear, to define a unique circle that passes through the points.

So what about ellipses?

Not quite. Think of the vertices of a square; a tall and narrow ellipse passes through them, but so does a short and wide ellipse. So you don't get uniqueness.

When you (naturally) ask about 5 points, it turns out that there is a unique conic containing any five points...but it's not necessarily an ellipse, even if the points form a nice convex set. Why? Think of 5 points on a parabola. The unique conic that fits these is...that parabola! So there's no ellipse that passes through them.

The projective space of conics is a fascinating introduction to algebraic geometry. The book on Projective Geometry by Pierre Samuel is a pretty nice intro if your other math skills are rock solid, but "other" includes abstract algebra in this case, so it'll be a while before you're ready to read it.

To close the argument:

But now you can take the quadratic for $E$, say $H_1$, and the quadratic for $C$, say $H_2$, and form a combination like $(1-t)H_1 + tH_2$, where $t$ is any real number, to get another conic passing through the four points, so there's a whole infinity of conics passing through these points. By the same argument as above -- the "not at all obvious" one -- infinitely many of these conics must also be ellipses.

This argument is taken from How many points does it take to define...

The picture says it all: 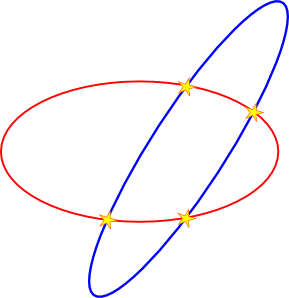 Suppose that we have K points, and we want these points to define only a single ellipse. If the points do define two ellipses, then the points must be found on the circumference of both – so they must be on the intersections between the two ellipses. Two ellipses intersect at most at four points – so if we have only four points, we are not able to resolve the ambiguity between the two. In order for there to be a contradiction, there must be at least five distinct points. Note that this proof doesn’t say that five points are enough; it only says that four are not.

This is an image to accompany a point I was making in a comment: 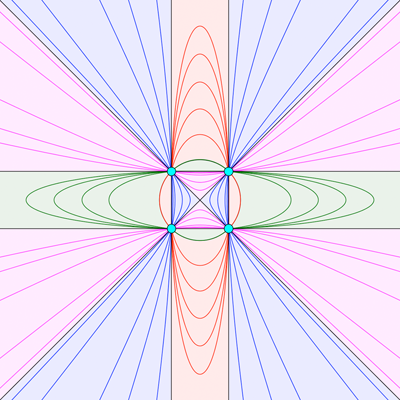 Four points ---here, the cyan ones at the corners of a square near the center--- don't just determine infinitely-many ellipses; they determine infinitely-many hyperbolas, too. (No parabolas this time.) Moreover, those ellipses and hyperbolas cover disjoint regions of the plane, in such a way that each point on the plane (other than the first four) lies on exactly one curve. This is what it means for a fifth point added to the collection to determine one of those curves uniquely. This is also why there has to be a "special" condition (namely: in which region to place the point) to guarantee that the fifth point determines the specific type of curve (ellipse or hyperbola) you might want.

Not the answer you're looking for? Browse other questions tagged algebra-precalculus geometry conic-sections or ask your own question.

1
Area of an ellipse proportional to integral of cross-ellipse distances?
2
Smallest Convex Hulls ($n$-Simplex) of $n+2$ Points in $\mathbb{R}^n$
2
Questions on the relation of the axis of a cone to its conic sections
1
Calculation method for a British Standard based on finding an ellipse given tangents?
3
Equations for this parameterised affine transform on the plane?
21
How many points are needed to uniquely define an ellipse?
4
Locus of orthocenter of triangle inscribed in ellipse