I am trying to understand with basic mathematical background how the $t$-Student distribution is a "natural" pdf to define. A more accessible explanation than this post, or the daunting Biometrika paper by RA Fisher.

[Note that the preceding opening statement is now correct after reflecting @Ian and @Michael Hardy comments to the OP in reference to the CLT.]

If the standard deviation of the population, $\sigma$, is unknown we can replace it by the estimation based on a sample, $S$, but then the expression (one-sample t-test statistic) will follow a $t$-distribution:

Minimal manipulations of this equation for $T$

We cannot integrate in close form the density of the normal distribution. But we can express it:

Since the values of the normal $\text{pdf}$ are symmetrical:

Comparing to the pdf of the chi square:

In the case of the $t$-distribution the chi-square is suitable to model the sum of squared normals, i.e $\displaystyle \sum(X_i-\bar X)^2 $ in the set of Eq $(1),$ a well known property derived here typically with $n$ degrees of freedom, but

So it boils down to understanding why

After that the derivation of the pdf is not that daunting.

PS: The accepted answer below becomes clear after reading this Wikipedia entry. Also, a plot may be useful including the spherical cloud $(X_1,X_2,X_3)$ (in red) with the orthogonal projection, $(X_1-\bar X,\ldots,X_n-\bar X),$ on the $n-1$ subspace forming a plane (in blue) at the origin: 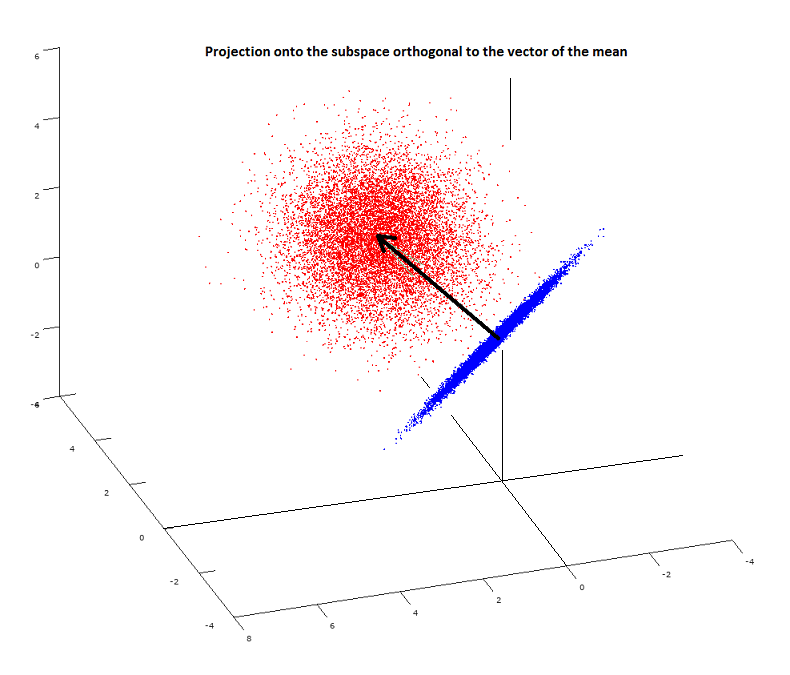 Your main question seems to be: how does the chi-square distribution get involved?

The random variables $(X_i - \bar X)/\sigma$ are not independent, but have covariance $-1/n$ between any two of them.

But the distribution of the sum of their squares is asserted to be the same as if they were (1) independent and (2) each has standard deviation $1$ and (3) there are $n-1$ of them.

This can be understood geometrically, as follows: The mapping $(X_1,\ldots,X_n)\mapsto (\bar X, \ldots, \bar X)$ is the orthogonal projection onto a $1$-dimensional subspace of $\mathbb R^n$, and it complementary mapping $(X_1-\bar X,\ldots,X_n-\bar X)$ is the orthogonal projection onto the $(n-1)$-dimensional subspace defined by the constraint that the sum of the coordinates is $0$. Notice that the latter projection takes the mean vector $(\mu,\ldots,\mu)$ to $(0,\ldots,0)$.

Also, notice that $\bar X$ is actually independent of $(X_1 - \bar X,\ldots,X_n-\bar X)$. That follows from the fact that they are jointly normally distributed and $\operatorname{cov}(\bar X, X_i-\bar X)=0$. That is also needed in order to conclude that you get a $t$-distribution.

24
Derivation of the density function of student t-distribution from this big integral.
2
Prove that $\frac{\sum_{i=1}^n (X_i - \bar{X})^2}{\sigma^2}\,\sim \,\chi_{(n-1)}^2$
2
Covariance between centered and scaled normal entries of a random vector
1
Looking for an unhurried treatment of the theory behind the $t$-distribution and the $t$-test
1
Proof that Sum of $n$ Squared Errors ~ Chi Square with $n$ $df$