What is the motivation behind this (tested, working) 2d coordinate transform?

I am working with programming and 2d geometry and need to transform between two different coordinate systems.

I have two different representations of the same world, where I can sample any point and get its (x,y) coordinate in each frame. Based on this, I need to write a function that calculates this transform for me, given any input coordinate in one of the reference frames.

I have already solved the problem, but I would like to understand it better. Searching the web, I found and based my solution on this

However, I'm missing a good explanation why the above works.

(Edit based on comment: I mean mathematically. I understand the matrix operations, but why is it valid in the first place?)

To summarize, the above link says:

Two x,y points and their corresponding (x', y') are needed to solve this.

In matrix notation, this linear system can be written as:

The v vector here is our [a,b,c,d] values , and can now be used to transform a new (x,y) coordinate into (x', y') according to the equations above.

There are several parts to a complete answer to your question, so I'll approach them one at a time.

Imagine that a point is "fixed in the world" in the same fashion as a building is fixed with respect to the ground. Now, you could have different coordinate systems to describe the location of that building (e.g., street numbers, postal addresses, GPS, lat/long, and more) but the building itself never moves.

So consider two different coordinate systems, connected by the equations: (I'll limit myself to 2 dimensions but this is all valid for more dimensions as well, with some modifications) 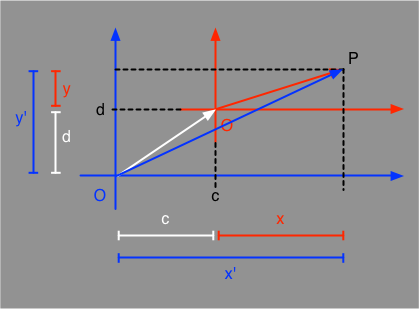 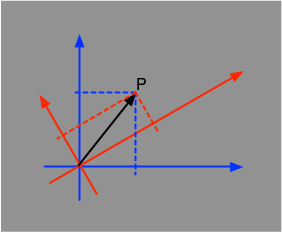 The figure gets a bit messy if I label all the coordinates so I didn't but I think you get the idea from the color-coding of the previous picture. In any case, now, the equations connecting the two coordinate systems are

where $\phi$ (the Greek letter 'phi') is the angle between the $x$-axis and the $x'$-axis. Note that we could also write these as

A third possibility is having the two coordinate systems share the same origin but have the transformation equations:

where $u$ and $v$ are real numbers. What these represent is a scaling (stretching or shrinking) of the coordinate axes. Note that if $u$ and $v$ have the same values, that scaling is the same for both axes. An example of this would be having one coordinate system measure distances in meters and the other measure distances in kilometers, in which case the common scaling factor would be 1000.

That would represent two coordinate systems that are translated, rotated, and scaled with respect to one another. Then, in the case of equal scaling for both axes (say, $u$), you'd have

and you could write, instead,

where $A = ua$ and $B = ub$. This is what you have in your example, i.e., two coordinate systems that are translated, rotated, and equally scaled with respect to one another.

Note: On a second look at what you have, it appears that your $y'$ axis is reversed with respect to the $y$ axis, which corresponds to a choice of $v = -u$ in the $(*)$ expression above, resulting in

I find that an unusual choice of coordinate systems, but that's ok if that's what you want.

To avoid confusion from writing points and coordinates in the same way, for now I will write $(c_1,c_2)$ to mean the point in 2D space, but $[c_1,c_1]_C$ to mean a pair of coordinates in coordinate system $C$.

I'm not clear on the exact question, and there are a number questions which can be answered about topic. One is, given some points along with their coordinates, can one determine $C$? Another is, given two coordinate systems, can one devise a map converting between them?

For the first, this really is just writing out a system of linear equations and solving for $v_1$, $v_2$, and $p$. This requires three different points, if I've counted the equations and unknowns properly.

The moral is supposed to be that explicitly keeping track of which coordinate system you are in can reduce confusion.

Not the answer you're looking for? Browse other questions tagged geometry transformation linear-transformations or ask your own question.

2
determinant of matrix of transformation from Cartesian to orthogonal curvilinear
1
Rotating a line segment in 3D to a prescribed orientation
2
After deriving a new coordinate via sequential linear transforms, how can I map translations back to the original coordinates?
0
Line plane intersection
2
Find the coordinate if slope, distance and one coordinate is known.
0
Convert 3d point onto a 2d coordinate plane of any angle and location within the 3D space
0
Transform a 3d point to a coordinate system relative to a viewing plane, and transform it back to its original coordinate system
0
Family of circles passing through two given points
5
Proving the existence of the Euler line using methods from Coordinate Geometry.