Suppose I consider the autonomous system

where $F$ and $G$ are nonlinear and my task is to draw the phase portrait of the above system. How does one compute the the trajectories that connect the equilibrium points?

Your question is very general, but I think it's possible to give recommendations that work in many cases. Although they are quite general too :)

There are two methods for solving such problems that immediately come to my mind. The first one is finding trapping region and the second one uses the existence of first integral. I should note that the first method doesn't compute the trajectory: it just shows that there's a trajectory that connects two equilibria. However, the second method might give you an implicit equation for finding separatrix.

Let's move to the details.

I hope that this simple illustration will make things clear: 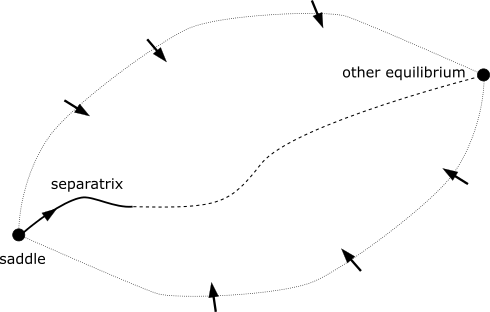 The idea basically is the following. You have a compact domain $\overline{D}$ which is forward-time flow invariant and one of separatrices stays in this domain. Since domain is forward-time flow invariant, this separatrix can't escape it. According to Poincare-Bendixson theory the only limit sets that are possible for trajectories that stay in bounded domains are equilibria, limit cycles or separatrix contours with saddles. If you somehow know that there is only one pair of equilibria in $\overline{D}$ and no limit cycles then the only possible conclusion is that separatrix goes to this other equilibrium.

Sometimes it's possible to find locally non-constant smooth function $F(x,y)$ such that $\frac{d}{dt} F(x,y) \equiv 0$. This function is called "first integral". The implication of existence of first integral is crucial for dynamics: trajectories of system lie on level sets of $F(x,y)$. Another important fact is that having the first integral makes impossible to have sources or sinks: by continuity whole sink's domain of attraction would have the same value of $F(x,y)$ as the sink itself, which would contradict assumption that $F(x,y)$ is locally non-constant. Level sets of $F(x,y)$ consist of whole trajectories and maybe of union of them with equilibria. It's easy to prove that separatrices of saddle lie in the same level set as the saddle itself (straightforward conclusion from continuity). Also, if separatrix goes to some equilibrium then it also lies in the same level as the separatrix. So this gives a sort of an algorithm: find equilibria, check if any of them lie in the same level set by computing $F(x,y)$ at them. Then just study how this level set looks like. So, you might have separatrices connecting two different saddles (heteroclinic connection) or connecting one saddle with itself (homoclinic loop).

Someone constructed system with heteroclinic trajectory in mind

The explanation for this paragraph also can be used as a method of constructing systems with heteroclinic trajectory. Suppose you have a system

for which you know that set $H(x, y) = 0$ contains heteroclinic or homoclinic trajectory with equilibria that are joined by it. Then the vector field defined by system

Knowing Lyapunov function in domain that contains saddle and sink

Suppose that you have a sink for which you have constructed a Lyapunov function in some domain. Suppose that you were so lucky that separatrix enters this domain. Then everything is done — separatrix goes to sink. Why is it "esoteric"? Finding trapping region (generally) is hard, finding Lyapunov function with big domain is much harder (IMHO, of course). However, existence of both things is guaranteed for some cases in qualitative theory.

Sometimes you have invariant axes. Or just invariant straight lines. Sometimes you have equilibria on these lines and some of them are saddles. Well, again, you're done. (I'm speaking about straight lines because they're easiest for check) Maybe sometimes you'll be lucky and you'll find some invariant graph $(x, f(x))$ (there's a simple condition for this graph to be invariant, but it maybe not so easy to fulfill them), where you can study the restricted dynamics and find saddles again. I think you've got an idea. See how many "maybe" and "sometimes" ? Yep, that makes this method "esoteric" too.

All questions, comments and corrections are welcome.

Not the answer you're looking for? Browse other questions tagged ordinary-differential-equations dynamical-systems or ask your own question.

6
Example of dynamical system where: $NW(f) \not\subset \overline{R(f)}$
6
Prove that an orbit is heteroclinic
6
Existence and uniqueness of homoclinic orbit
4
Dynamical System is fixed point at origin hyperbolic or asymptotically stable and is the system Hamiltonian
5
The system $x' = h(y), \space y' = ay + g(x)$ has no periodic solutions
0
Periodic orbit of differential equation
3
Prove existence of a Heteroclinic Orbit
3
Deducing the nature of critical points from implicit solution
1
What is a trapping region?
2
Phase plane analysis when eigenvalue 0
See more linked questions