How many combinatorial types of pure quadtopes of dimension 5 are there?

A pure quadtope is a quadtope each of whose vertices is a vertex of an element of Q.

This partial answer will list 9 combinatorial types of 5-dimensional pure quadtopes. In the following, ‘quadrilateral’ is shortened to ‘quad’.

Types 2 – 5 are each the convex hull of three quads, with pairwise intersections at a vertex. Thus, the quads form a loop. For a given quad, say Q1, there are two ways it can connect to the other two quads; the common vertices can be adjacent on Q1 (described as crenellated), or they can be diagonally opposite on Q1 (described as diamondback). The term crenellated is suggested by the outline of the same-colored squares on the first two rows of a chessboard. There are four resulting combinatorial types, denoted ccc, dcd, cdc, and ddd, corresponding to whether the arrangement of quads 1, 2, and 3 (not necessarily in order) is crenellated or diamondback.

Starting with one of the types 2 – 5, you can build another 5-dimensional combinatorial type by selecting one free vertex each from Q1 – Q3, adding a vertex V10 by completing another parallelogram Q4. So, each quad intersects at three different vertices with the other three quads. On any quad, there are two pairs of adjacent vertices intersecting with other quads, and one pair of opposite vertices intersecting with other quads. So, in describing the arrangement of quads in each of the four quad triplets (as above), ‘c’ must appear 8 times and ‘d’ 4 times. (The quad triplets subtend proper 5-dimensional subpolytopes). There are therefore at least four more combinatorial types:

From types 6 – 8, a fifth quad can be added, so there are more 5-dimensional pure quadtope types. (I'll accept this answer for now & complete the list later.) The figure below contains diagrams for types 2 – 9, showing the quad arrangements and vertices. In the diagrams, arcs are used to join vertices to indicate that they are actually the same vertex. 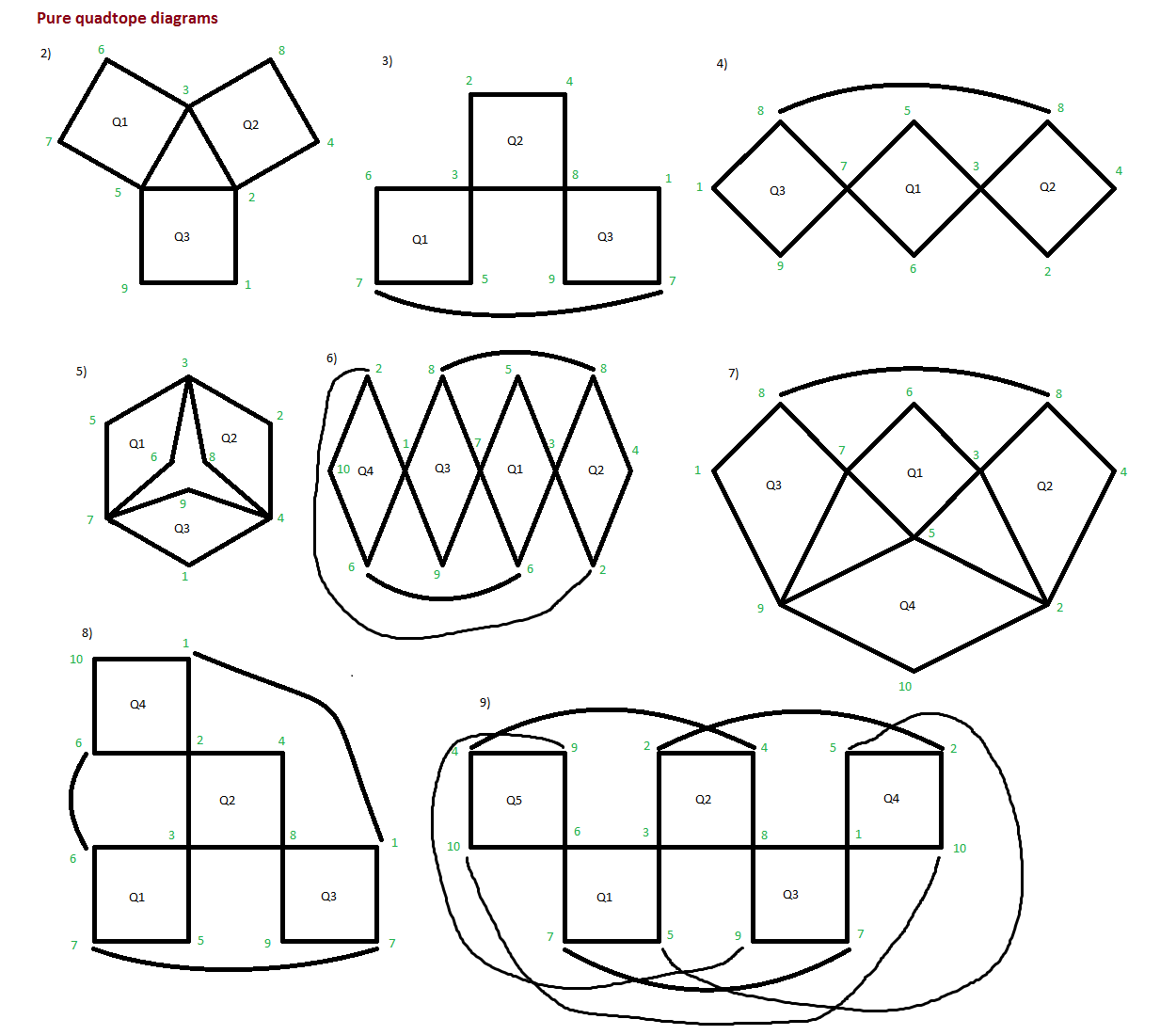 Not the answer you're looking for? Browse other questions tagged geometry combinatorics or ask your own question.

2
Are there face lattice results for the following class of polytope constructions?
2
Vertex set and combinatorial type of a constructed centrally symmetric polytope
0
Counts of certain types of faces of the $CQHRL_d$ polytope family
2
Proving the number of k-dimensional components for the cross polytope
6
Why are there nine regular polyhedra?
2
How many ways can four planes be arranged in space?
3
Why can't a vertex of a $d$-dimensional polytope be in fewer than $d$ edges?
5
How to show that any polytope $P$ is spanned by the neighboring edges of any vertex $x$?