From The Weierstrass Approximation Theorem Vs The Runge's Phenomenon:

We contrast this to polynomial interpolation: this is a specific method for generating a sequence of polynomials that will approximate our data set. If our data set was just the outputs of some continuous function, we would hope that the sequence of polynomials would approximate it arbitrarily closely as we generate them of higher and higher degree. The Runge phenomenon says that this is too optimistic: approximating $\frac{1}{1+x^2}$ over $[−5,5]$ with equidistant nodes does not converge in the way we want.

In the most general sense, a Taylor series is not guaranteed to converge everywhere - try plotting the first few terms of a Taylor expansion of $\frac{1}x$ around $x=1$. If you only look in the interval $0<x<2$, you'll see that it keeps getting better and better, but if we look at $x>2$ we'll see that when we have an odd number of terms, the Taylor expansion spikes way below where it should be (as seen in the order 7 approximation):
$\hskip1in$ 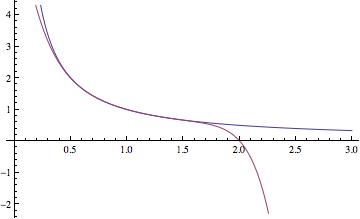 and with an even number of terms, we get way above where it should be (as in an order 8 approximation):
$\hskip1in$ 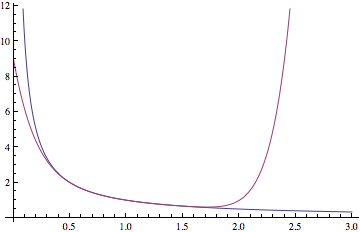 As it happens, if we add enough terms, we'll end up with a good approximation in $(0,2)$, but beyond that, things will oscillate with increasing intensity.

We can say that all Taylor series have a radius of convergence, which measures how far away from the base point one can go before the approximation goes wonky. However, we get into trouble when we note that this radius might be $0$ (meaning it converges only at the base point - not very useful) or we might have a smooth, but not analytic function - meaning it converges, but it doesn't agree with the desired function. In the example of $\frac{1}x$, the radius of convergence is $1$ - so we can stray as far as one unit away from $x=1$ before things go bad. We can see examples like $\sin(x)$ or $e^x$ which have infinite radius of convergence - so as you add more terms, your approximation will get closer to the desired function (over any desired interval). We also get examples like $|x|$ which aren't infinitely differentiable and so don't even have a Taylor series.

So, in the best case, we can say that a Taylor series act by becoming increasingly accurate on some fixed domain and - though they are not susceptible to Runge's phenomenon, they have their own problems. In contrast to this, the Weierstrass theorem states that there is some sequence of polynomials which provides a good approximation, but it doesn't give any particular hint on how to construct it.

Not the answer you're looking for? Browse other questions tagged calculus polynomials taylor-expansion approximation or ask your own question.

4
The Weierstrass Approximation Theorem Vs The Runge's Phenomenon