This is Exercise 13 of Chapter 6 of Ideals, Varieties, and Algorithms by Cox et al.

The problem asks to translate the following geometric theorem into polynomials and using Groebner basis to test whether the conclusion $g$ follows generically from the hypothesis $h_i$.

The three altitudes of a triangle meet at a single point $H$.

Here is the picture: 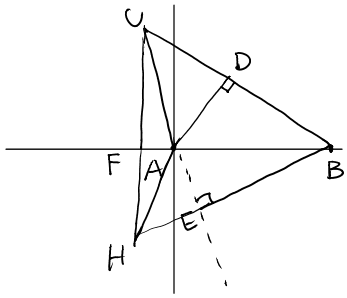 In the picture $ABC$ is the original triangle. I will use $u_i$ as independent variables, which could be arbitrary, $x_i$ as variables that can be determined by others.

Is there mistakes in my formulation? Or did I miss anything?

Thank you very much for any help!

Browse other questions tagged geometry algebraic-geometry groebner-basis or ask your own question.

2
Intersection of two open sets in the projective plane
5
Project a vector onto the intersection of surfaces
3
How to know when a polynomial belongs to a certain ideal in $\mathbb{C}[x_1,x_2,x_3]$?
1
Zero sets intersect in a line
0
Orthogonal vector space (orthogonal signal sets)
5
On the radical of a certain ideal of sixteen variable polynomial ring, generated by the entries of certain matrices
8
Products of Determinantal Ideals