Eccentricity of an ellipse

This is referring to an ellipse/hyperbola/parabola and their conic sections. The problem is not the proof for how $PF/PD = e$, or how $C/A = e$, but how the two equate to each other. (The letters stem from the points/foci of an ellipse of a cone and its directrix).

What is the answer that does NOT use analytic geometry? (only trigonometry)

The figure below shows a conic section (specifically an ellipse) with focus $F$ and directrix $D$. The conic is the intersection of the blue cone and the purple "cutting plane". The figure also shows the Dandelin sphere associated with $F$ and $D$. (Interestingly, the Wikipedia article mentions the focus-directrix property "can be proved" with Dandelin spheres, but doesn't give that proof!) Let's call the green "horizontal" plane containing the circle where the sphere meets the cone the Dandelin plane; call that circle the Dandelin circle. 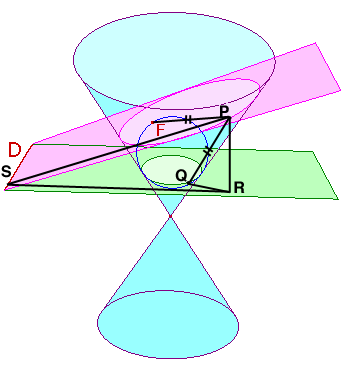 We can massage the focus-directrix ratio for $P$ thusly:

Clearly, $\angle S$ is constant as $P$ moves about the conic; it's the angle between the cutting plane and Dandelin plane. But $\angle Q$ is also constant: it's the ("exterior") angle that the surface (more precisely, a "generator" line) of the cone makes with the Dandelin plane. Therefore, the focus-directrix ratio is a constant.

To complete the answer to your question, all we have to do is prove that "(focal distance)-over-(major radius)" gives the same trigonometric ratio.

For now, we'll assume the conic is an ellipse (that is $\angle S$ is smaller than $\angle Q$). 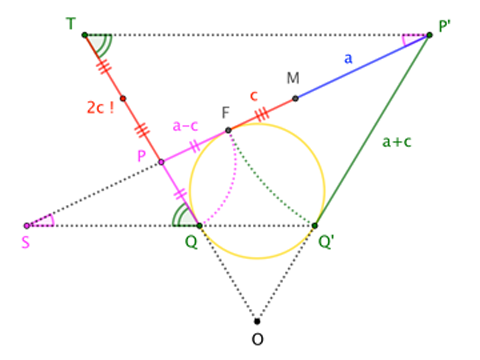 Now that we know where everything is, a couple more applications of the equal-tangent-segment property are all we need. With $a := |\overline{MP^\prime}|$ and $c := |\overline{MF}|$, we have

For the hyperbola, overlapping elements muddle the diagram a bit, but the argument is essentially the same (with a simple sign change): 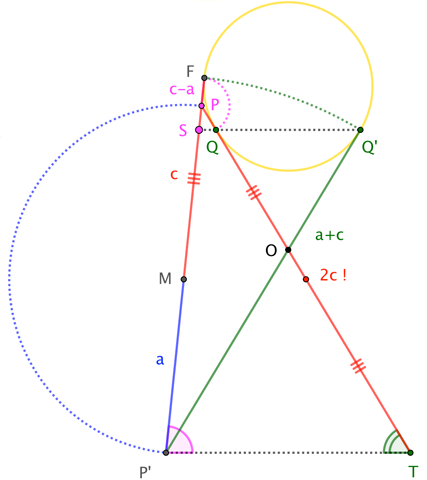 There's no argument to make for the parabola, which has no "focal distance" or "major radius". However, one sees that, as the $\angle S$ nears $\angle Q$, the ratio of the lengths of these elements within an ellipse or hyperbola approaches $1$, as expected.

Thus, the "distance-to-focus-over-distance-to-directrix" ratio and the "focal-radius-over-major-radius" ratio (when defined) are the same constant that we happen to call the "eccentricity" of a conic. This discussion reveals the geometric meaning of that number. I suspect that most students these days had no idea that there is such meaning. Kudos to the teacher who assigned this problem as homework.

Not the answer you're looking for? Browse other questions tagged geometry trigonometry conic-sections or ask your own question.