I'd like to think that I understand symmetry groups. I know what the elements of a symmetry group are - they are transformations that preserve an object or its relevant features - and I know what the group operation is - composition of transformations. Given a polyhedron or wallpaper tiling or whatever, I could probably start spotting the symmetries, which would entail listing out elements of the symmetry group, and then I could start filling in the multiplication table.

Penrose attaches a group to impossible figures to capture their inherent ambiguity, and I'd like to grok these groups like I do symmetry groups. Take a prototypical example, the tribar: 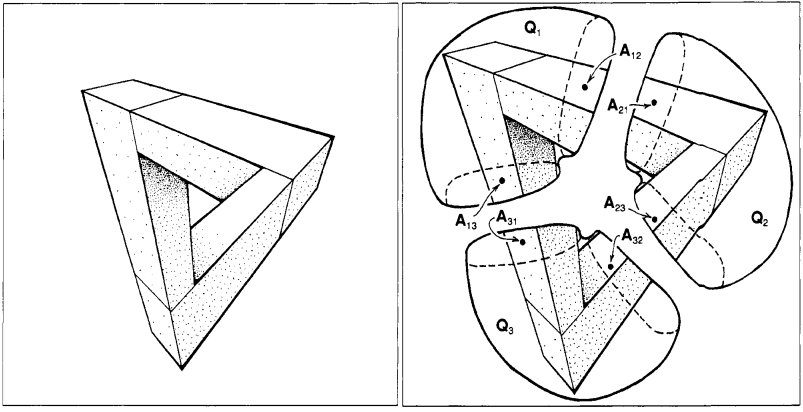 He names the "ambiguity group" $G=\Bbb R^+$ (positive numbers under multiplication) to describe possible distances of points. We can split the figure up into three components, as above, and interpret them as being disconnected from each other in three-space but from our perspective they seem to make a single figure. For convenience, I think we should let $A_{ij}$ denote points on the figures as well as represent their distances from the origin, interchangeably.

One can scale the distances the components $Q_1,Q_2,Q_3$ are from the origin without affecting our perception of them. (Perhaps consider our "perception" of them to be their radial projection onto the unit sphere, or something.) The effect of scaling one of these $Q_i$ by a factor of $\lambda$ on the $d_{12},d_{23},d_{31}$ is to scale one of them by $\lambda$, a second by $\lambda^{-1}$, and leave the third unchanged.

Note that $\tau=d_{12}d_{23}d_{31}$ is an invariant, in the sense that scaling the components independently does not change the value of $\tau$. The compatibility situation $(1)$ occurs precisely when $\tau=1$. 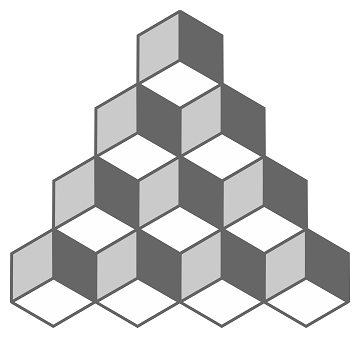 $\sf \color{Fuchsia}{(B)}$ How do we know what pieces to cut a figure up into? Since the tribar has obvious threefold symmetry, that kind of inspires the choice of three pieces. But it seems that with the congruence relation used to define $H$, we could choose to put any two of those pieces together into one component and fix its position, only letting the last component vary (which would be one degree of freedom, exactly as $H\cong\Bbb R^+$ predicts). So we could have cut into two pieces. Or we ould cut into six pieces, or any number of pieces. Will it never matter how many pieces we choose? Why would we break apart the tribar's corners but not break apart the faces of the Necker cubes? What figures would we cut into pieces, and what figures would we do something else to? And with the latter figures, what would we do to find their $H$ group?

$\sf \color{Fuchsia}{(C)}$ What are the group elements and what is the group operation? As I mentioned with symmetry groups, it's intuitive what their elements are and what the operation is. But what about with $H$? It seems the elements are physically realizable configurations consistent with our perception, modulo altering the configuration in a way that wouldn't change our perception. The identity element would be the configurations in which our perception is actually correct and sensible. And the group operation seems to be ... I don't know. Presumably we could use componentwise multiplication of the representative tuples $(d_{12},d_{23},d_{31})$, or equivalently multiplication of the invariants $\tau$, which would make $H\to\Bbb R^+$ a group isomorphism, but how would this operation be meaningful or relevant?

$\sf \color{Fuchsia}{(D)}$ Why is this called a cohomology group? Yes, our $H^1(Q,G)$s are being called cohomology groups. I deliberately put off using that word as long as possible. (And so you've read this far. Suckers.) But in what sense are these groups cohomological? Are there higher cohomology groups $H^n(Q,G)$ and coboundary operators? Is this cohomology dual to some kind of homology of impossible figures? Probably I will be unable to understand answers to this question, as I don't really know what cohomology is in the first place. No time like the present?

Source: On the Cohomology of Impossible Figures.

To answer $\sf \color{Fuchsia}{(A)}$, one has to understand the meaning of the ambiguity group clearly first - indeed, your interpretation of the group is not entirely correct.

The punchline here is that the ambiguity group measures ambiguity, not quite impossibility (which is the job of the cohomology group defined later), of the given figure. For example, consider the tribar, and piece it up into $Q_1, Q_2, Q_3$, as done by Penrose. If you stretch $Q_1$ by a factor of $\lambda > 0$, shrink $Q_2$ by a factor of $\lambda$ (that is to say, stretch by $\lambda^{-1}$), and leave $Q_3$ as it is, the resulting object is really the same tribar, which is what Penrose was trying to convey through the following picture from the paper.

That is to say, modifying $Q_i$'s in this way gives you a symmetry of $X$. And you have such a symmetry for each $\lambda > 0$. Of course, collection of such symmetries $G$ is a group: consider one symmetry which stretches $Q_1$ by $\lambda$, shrinks $Q_2$ by $\lambda$ and leaves $Q_3$ as is and another one which does the same thing with $\lambda'$ this time instead. You can of course compose them, and the resulting symmetry stretches $Q_1$ by $\lambda \lambda'$, shrinks $Q_2$ by $\lambda \lambda'$, and leaves $Q_3$ invariant. This is the ambiguity group. This partially answers $\sf \color{Fuchsia}{(C)}$. Note that the origin of the name comes from the fact that the tribar is ambiguous in the sense that you can have different $Q_1, Q_2, Q_3$'s matching up to produce the same tribar. You can never tell the length of a bar in the tribar - it'll depend on the point of view you're seeing it from. And the "group of symmetries" $G$ captures all the ambiguity there is.

That said, given the Necker cubes, the ambiguity is in the vertices. Pick any vertex $v$ from the figure. There are two point of views here - $v$ can either point upwards, or point downwards. If $v$ points upwards, then so does all the other vertices, and similar for the other choice. So two point of views, two choices - hence, the ambiguity group is $\Bbb Z/2\Bbb Z$. More formally, the symmetry is obtained from reflecting the whole figure (imagined as sitting in $\Bbb R^3$) along an appropriate hyperplane. Obviously, the symmetry group then is the cyclic group of order 2.

To answer $\sf \color{Fuchsia}{(D)}$. Yes, this is indeed a variant of Čech cohomology.

The final thing to check is that $\partial \partial : C_{n-1}(X) \to C_{n}(X) \to C_{n+1}(X)$ is the zero map. This is a rather tedious and technical thing to check, but if the readers try verifying it, they will understand the motivation behind the rather bizarre definition of $\partial$ above. To sum up, we have that

is a cochain complex. We can thus take it's cohomology $H^n(X; G) := \ker \partial/\text{im}\partial$ (the $G$ is there to indicate that the cochains are $G$-valued. Indeed, we could have put any group to be the coefficient group there, but it seems Penrose finds it natural to use the ambiguity group of $X$). For $n = 1$, this is precisely the $1$st cohomology group of Penrose.

I picked the open cover $\{U_i\}$ of $X$ to be good, i.e., all sets and all intersections are contractible. The reason is that by the nerve theorem, $X$ would have the homotopy type of the nerve $\mathcal{N}$ of $\{U_i\}$. Čech cohomology just computes cohomology of the nerve $\mathcal{N}$, but since this is homotopy equivalent to $X$, that is the same as taking cohomology of $X$, so it's independent of whatever good cover we chose. I think something similar must be at work for these ambiguous/impossible figures. This probably answers $\sf \color{Fuchsia}{(B)}$, but only Penrose knows what he had in mind.

One more thing I haven't addressed yet.

The first part of this answers gives a rough overview of how you could recognize the ambiguity group from a given ambiguous picture, so I presmume I have answered that bit. I do not know what a rigorous definition of the ambiguity group might be, but I presume it's some sort of inherent symmetry group of the chosen cover $\{U_i\}$. Also, certainly the analogy is tenable: if you read my answer to $\sf \color{Fuchsia}{(A)}$, you'd see that this ambiguity group is indeed some sort of symmetry groups which captures symmetries "induced from ambiguity". However, I do not know if you can construct an ambiguous figure such that the ambiguity group $G$ is isomorphic to a given group. Here's some food for thought: Assume $G$ is a finitely presented abelian group. Pick generators $x_1, \cdots, x_n$ of $G$. $F$ be the free abelian group generated by these. If $Y$ is some ambiguous figure with infinite cycle ambiguity group, then disjoint union of $n$ copies of $Y$ gives you a figure with ambiguity group isomorphic to $F$. Now given relators $r_i = 1$ for $G$, try identifying the copies of $Y$ appropriately to kill the symmetries corresponding to $r_i$. Can this be done?

PS: I wanted to add an explicit computation of the Penrose cohomology $H^1(X; \Bbb Z/2)$ of the Necker cube as a summary, but I'd need some pictures for that and I'm too ashamed of my drawing skills to add it. Maybe if OP (and others reading this) are really interested.

Not the answer you're looking for? Browse other questions tagged geometry recreational-mathematics homology-cohomology symmetry or ask your own question.

10
What is the true relationship between impossible figures and cohomology?
7
Geometrical interpretation of the Triple Product Rule
0
What is formal intersection?

0
From geometrical figures to function
3
Inductive definition of group cohomology?
20
What is the mathematical significance of Penrose tiles?
2
A question of notation in cochains groups and cohomology
2
Cohomology, Penrose Triangle, and Shepards Tone
10
What is the true relationship between impossible figures and cohomology?
2
$3D$ figure with rotation group isomorphic to $D_3$
5
Precise definition of Dihedral Group
2
Proving that a transformation is an isometry and find the projectivity which reperesents