Ignoring the workspace in quantum computation

In his book Quantum Computer Science, Mermin says that, although we'll need lots of "workspace" qubits in addition to those in the input and output registers, we can essentially ignore these in our analysis so long as we start and end with them in some fixed state, since they'll then be unentangled with the registers which contain any information we actually care about. He then goes into some detail to show that this is possible, i.e. that we can use the workspace bits, yet leave them in a fixed state. In fact, his method is intended to leave them in the initial state.

Here's his diagram of the approach:

I'm a complete novice in all this, but it looks wrong. After the copy, all three sets of bits are entangled and, it seems to me, we'd have to undo the copy as well as V to be sure that the input and workspace are restored to their original states.

So, in general, applying $V^\dagger$ does not look like any guarantee that the workspace will end up in its original state.

If I'm wrong--as I assume given my inexperience--what's my error? Or, in the unlikely event that I'm right, what can be done to make sure that the workspace state is restored and hence that we can, in fact, ignore it.

Here's a specific case in which, as far as I can tell, things don't work out. As above, input, output and workspace are each just one bit. 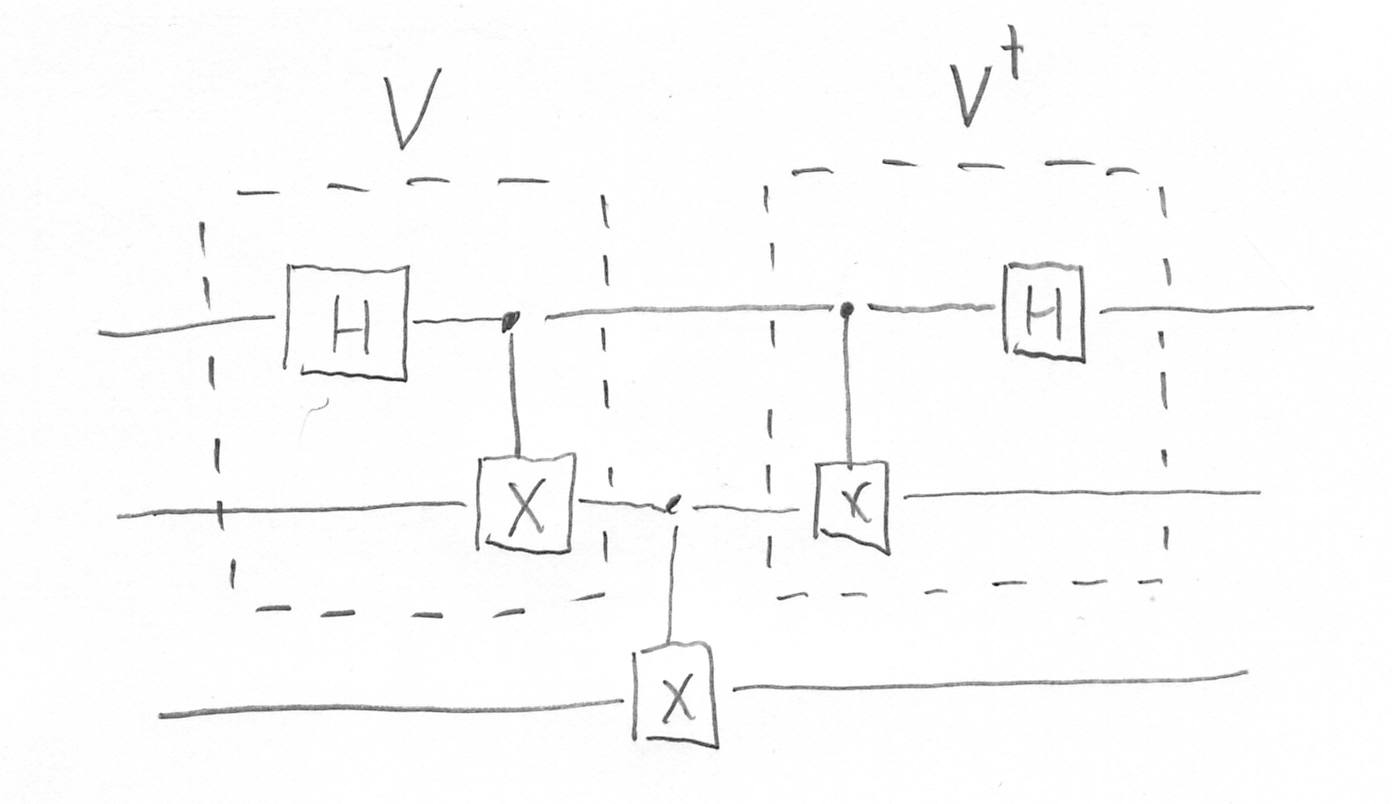 Mermin was kind enough to look at this himself and provide me (the original poster) with an answer. The key is that his $V$ operator is not only reversible but, since it calculates a function $f(x)$ from binary numbers to binary numbers, one that takes basis states to basis states. With this second condition, it is, in fact, true that applying the inverse $V^\dagger$ after the copy leaves workspace bits in their original state.

My hand-drawn counter-example uses a $V$ that does not take basis states to basis states, since it applies a Hadamard to the input.

I convinced myself that the second condition resolves the problem by looking at a couple of examples. Even if the input is a superposition $\alpha_0 |w_0x_0y_0\rangle+\alpha_1|w_1x_1y_1\rangle+...$, we're okay. The operator $V$ applies a 1-1 relabeling of the $wx$ sections of the components of the superposition. The copy changes $y$'s, doing nothing to the $wx$ sections. And then $V^\dagger$ inverts the relabeling, leaving the $wx$ sections as they were initially. Since all of the $w$ parts were initially identical, they must also end up identical--which was the goal, since it implies they're not entangled with the rest.

Note that my question contains an error. Mermin does not claim that the input ends up in its initial state, just that the workspace does.

2
Finding equivalent matrix product of a simple quantum circuit
4
$\{\langle M,q,x\rangle$| $M$ is a Turing machine and $q$ is a state of M and running of $M$ on $w$ visits $q\} \notin R$?
3
Simon's algorithm for n = 3
1
Specific system of equations with multiplications
3
Can a Turing Machine process an infinite string?
1
Using hadamard transform after a CNOT transform
0
Why does this solution to the Bernstein-Vazirani problem use $ (-1)^{f(x)} $
1
How to read Mermin's use of subscripts in his Cbit operators?