Using the unit circle to prove the double angle formulas for sine and cosine?

How do you use the unit circle to prove the double angle formulas for sine and cosine?

Look at this figure: 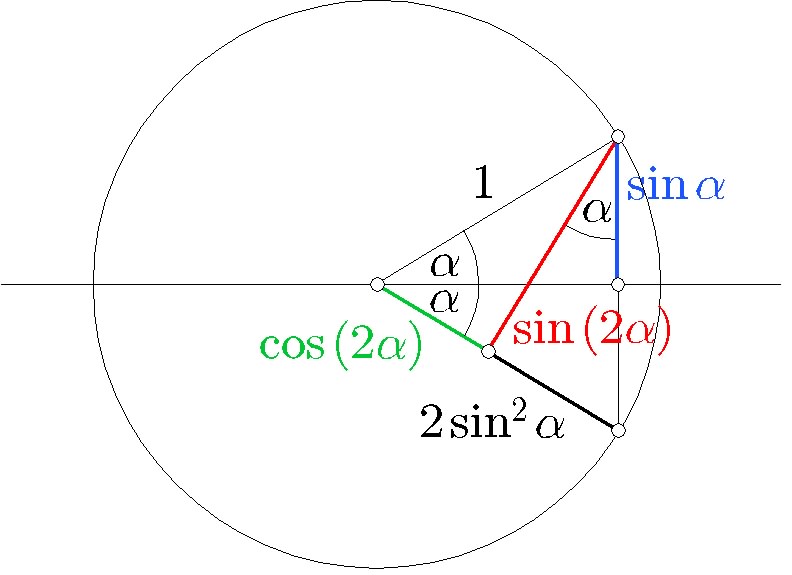 Here's one possibility. Say we want to find $\sin 2\theta$ and $\cos 2\theta$. Draw the unit circle in an ordinary $x$-$y$ coordinarte system, and also introduce a new coordinate system $x'$-$y'$ that has been turned $\theta$ clockwise around the origin. It is important that the unit circle in the $xy$ system and in the $x'y'$ system is the same: 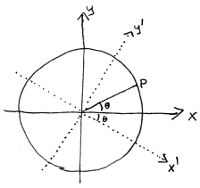 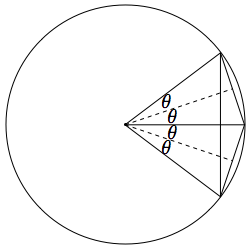 The two diagonals of the kite-shaped figure (represented by solid lines) are perpendicular, and the area of the figure equals half the product of their lengths. But one diagonal has length $1$ while the other has length $2\sin2\theta$. The double-angle formula for $\sin$ follows.

My interest in this proof is partly historical. Inscribe a regular $n$-gon in the unit circle. Let $\ell_n$ be the length of a side of the $n$-gon. This $n$-gon can be broken into $n$ isosceles triangles with side lengths $1,$ $1,$ $\ell_n.$ 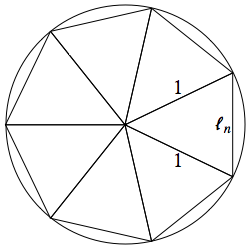 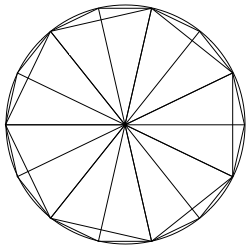 The diagonals of these kite-shaped figures are $1$ and $\ell_n$. The area of this $2n$-gon is therefore $$ A_{2n}=\frac{n\ell_n}{2}. $$ By repeatedly doubling the number of sides, $A_{2n}$ becomes an increasingly accurate approximation of $\pi.$ This is the method for estimating $\pi$ devised by Liu Hui around 263 AD. He started with $n=6$ $(\ell_6=1)$ and applied five doublings. In doing this, Liu Hui needed to compute $\ell_{2n}$ from $\ell_n.$ This can be done using the formula $$ \ell_{2n}^2=2-\sqrt{4-\ell_n^2}, $$ which is essentially the half-angle formula (since $\ell_{2n}=2\sin\theta$ and $\ell_n=2\sin2\theta$), but which Liu Hui derived using the Gougu Theoerem (Pythaogorean Theorem). Chinese geometry of that era apparently did not employ the notion of angle, so the connection with the double-angle and half-angle formulas is ahistorical. Obviously the modern algebraic notation is also ahistorical.

Compute lengths of the thick line segments in the figure below in two different ways. 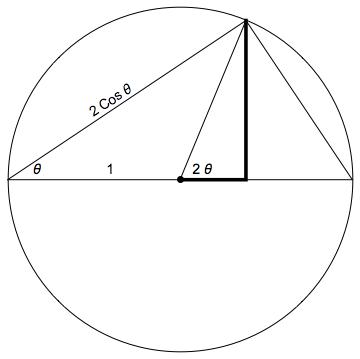 8
Intuition for graphing Sine/Cosine
4
Why are the Cosine and Sine of obtuse angles defined differently? If by convention, please explain the logic behind.
0
In the unit circle, how are sine and cosine values derived for points on it?
1
deriving sine half angle formula from sine double angle formula
0
Understanding sine, cosine, and tangent in the unit circle
0
How to Determine Cosine, and Sine Given $\tan^{-1}x$