"Long-division puzzles" can help middle-grade-level students become actual problem solvers, but what should solution look like?

This is my first post. I hope it's acceptable.

EDIT Since there are people to whom such notation is foreign, I will point out that the problem represents KRRAEE / KMS, where PEI is the quotient and KH is the remainder. KHHR represents P times KMS and ALH is KRRA minus KHHR; the E is "brought down" per division algorithm. The next two hunks are defined similarly.)

Because I want math students to become problem solvers in a manner than does not rely heavily on the "template-based" problem solutions that permeate math education at the middle-grade level, I would be interested in seeing written, easily-followed, mathematically- and logically-valid derivations of the solution to such division puzzles as the one below, such presentation being one that a reasonably competent "Algebra I" student could both follow and produce. (Maybe I just have a bad case of OCD, but I daily find joy in solving these puzzles, taking care to produce a presentation that just such a student could both follow and produce. Part of the joy stems from the belief that a summer project devoted to such problems could greatly enhance students' problem-solving abilities.) 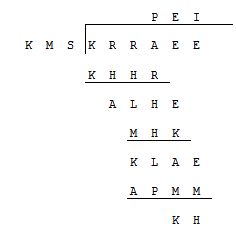 Spoiler alert: Answer follows. But since the requirement is that the solution be an actual derivation, go ahead and look. It's hard enough without it.

Having given this a lot of thought, I think you might find the tableau below useful in organizing thoughts. It amounts to each non-vanishing "subtraction column" with blanks on either side of possible loaning and borrowing. 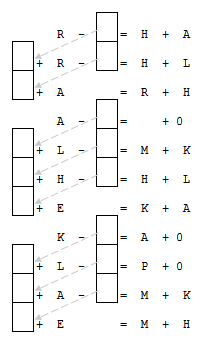 Before I post a solution I've arrived at, here is an outline that guides solution, whether writing it or following it.

The 3-deep-dashes symbol can be read "is congruent to (modulo 10)" [i.e, it says that the units digit of the multiplication on its left-hand side is found on its right-hand side.]

I find it hard to believe that, with long division's future uncertain, this problem type will be easily swallowed; but the inherent mathematics and logic may turn the tide of opinion.

This is a particularly-easy problem of its type, chosen mainly because modular arithmetic, accessible to the target student audience, makes solution easier.

It’s not hard to write out a solution in more readable form. Here’s a sketch, giving the key steps.

It’s clear from the last subtraction that $K=2$:

Here's the solution I arrived at one day recently. It's in a format that I found, after much experimentation, to be one that MAYBE the target audience could both follow and use as a guide to writing their own solutions. 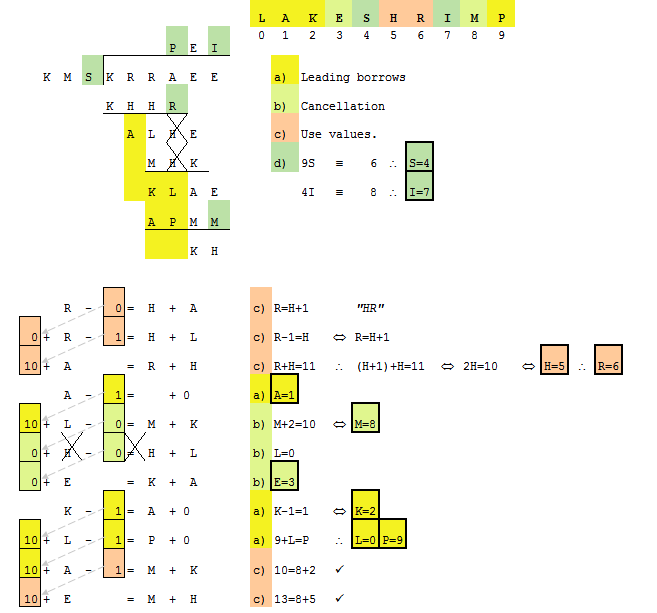 If the requirement were to write a truly-mathematical-looking derivation (ordered, with many words, from first equation down the page to last), NOBODY (including ME!) would be interested.

I truly believe that students at ANY level would become better problem solvers if given these (drum roll) PUZZLES--math FUN; math at its best? At least for young'uns. (And me!)

The use of color and the a), b), ... guide could make this not only easier but even MORE fun--AND ACCESSIBLE.

Here's another problem, significantly harder than the previous, but still accessible to target audience. The statement of the problem (i.e., northwest corner only) comes from a PennyDell puzzle magazine: 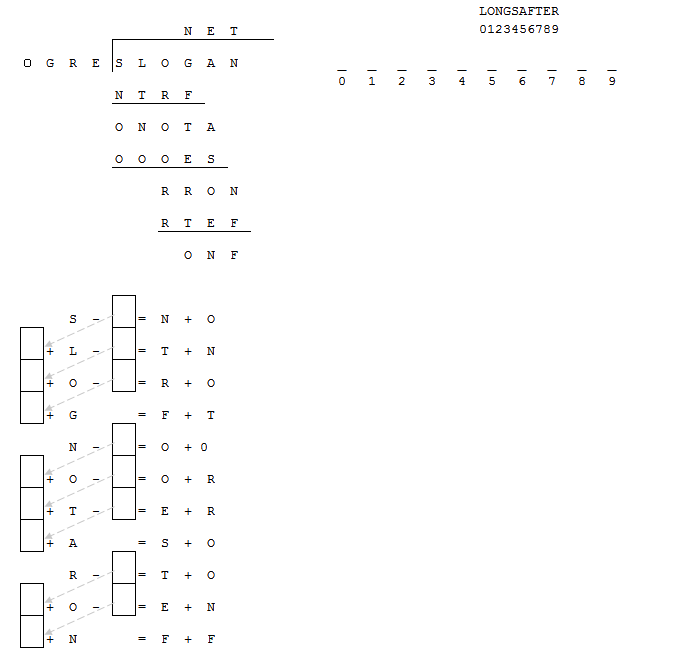 Not the answer you're looking for? Browse other questions tagged recreational-mathematics problem-solving puzzle education or ask your own question.

1
A harder long division puzzle than the first; what should "Algebra I" solution look like?