The trigonometric ratios of an angle greater than $90^\circ$ are equal to the supplementary angle's ratios.

Instead of ratios in right triangles (which as you notice make sense only for acute angles), one can consider the cosine and sine defined as the $x$ and $y$ coordinate of a point that moves around a unit circle. This works for all angles -- and for acute angles you can inscribe a right triangle in the first quadrant of the unit circle and see that the unit-circle definition matches the right-triangle one.

After 90°, the cosine becomes negative, because the point is now to the left of the $y$ axis (so the $x$ coordinate is negative).

After 180°, the sine becomes negative too -- both coordinates of the moving point are now negative.

There are two possible definitions of the trigonometric ratios:

The unit circle definition is the same as the triangle definition for angles between $0$ and $90^\circ$, but is more general since it works for any angle. The following picture from Wikipedia illustrates this definition: 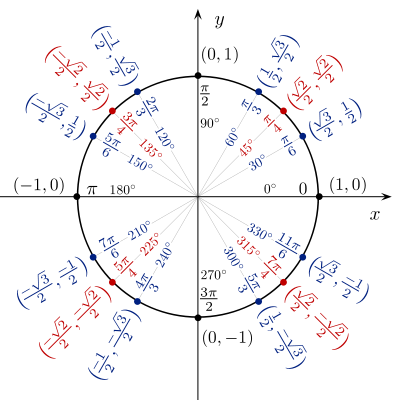 Yes, except the cosine gets a negative sign. You're right - you can't make a right triangle containing one of these angles and so the classical definition of sine and cosine as ratios in right triangles does not make sense for them. You can take it as a "convention" that the angles get the definition they do, or you can think of it a different way.

An alternative interpretation of trig functions that makes sense for any angle, even negative angles or angles above 360, is that the cosine of $\theta$ is the $x$-coordinate of the point on the unit circle (the circle of radius 1 with center at the origin) whose counterclockwise angle from the positive $x$ axis is $\theta$, and the sine of $\theta$ is the $y$-coordinate of that point. If you draw the picture you'll see why the two definitions agree for $\theta$ between 0 and 90.

You have the following relationships, where two have a sign change:

One way to think about angles greater than $90^\circ$ is with Cartesian co-ordinates with $x$ and $y$ axes (so some of $x$ and $y$ values can be negative, but the radius or hypotenuse to the origin is non-negative) and the angle is measured anti-clockwise from the $x$ axis.

-1
Meaning of trigonometric functions
0
Help me understand trig.
1
How does the unit circle work for trigonometric ratios of non-acute angles?