What is the direction along the edge of a circle called (in English and by chance German)?

Note: I am actually also searching for the term in German. That is why I posted this here (as opposed to the language SE's), besides me looking for this term in a mathematical/technical context.

I'd like to say "the points are shifted ______ly as the radius of the circle grows".
With "shifted" I aimed to convey the change of place to be discrete.

Searching I found "radial", "axial" and "circular", of which the first two are probably wrong, while the last one seems to be used predominantly in the sense of "circle-shaped" or "round". However, Merriam-Webster suggests "moving or going around in a circle" as an alternative definition—is this interpretation somewhat usual?

In German, the yield is even less, as can be seen from the Duden entry on "zirkulär".

"Radially" (in my experience) usually refers to a bunch of things spreading out in a circle, like if you drop a water balloon the water spreads out radially.

I'm pretty sure that the word you are looking for is "circularly" or "undergoes circular motion". I am a native english speaker and don't believe I've heard anything else.

Then there's just "circle" as a verb. As in "the points circle back around".

There's also "circumnavigate", although this usually is used in a more metaphorical, literary sense rather than actually moving on a circle.

Given your context, it seems like the best option is "the points rotate about the center as the radius of the circle grows"

The term "azimutale Richtung" is common in German engineering and physics textbooks.

To keep it clear and simple, I would write "The points are displaced along the circumference as the radius of the circle increases." My German is poor, but perhaps something like "Wenn der Radius des Kreises sich vergrößert, die Punkte werden entlang dem Umfang verschoben" would get the idea across.

How about angularly? Is it implied in the context that the points are bound to the circle's edge?

Orbitally, tangentially, and transversely (in a non-Euclidean sense, i.e. the circle is flat and expanding "up", so sideways motion would be "transverse" to that motion) come to mind.

As for the discrete aspect of the "motion", changing the word "shifts" to "jumps", or something similar to better imply the discrete nature of the result.

The words clockwise (a.k.a. deasil) 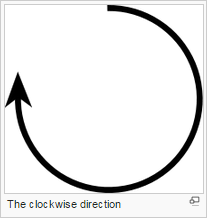 and counter-clockwise (a.k.a. anti-clockwise, a.k.a. widdershins) 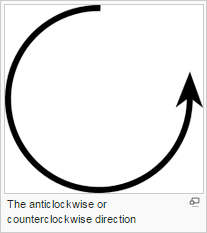 sound to me like what you're after, in English at least.

Not the answer you're looking for? Browse other questions tagged geometry terminology circles or ask your own question.

15
Closest point on circle edge from point outside/inside the circle
3
What is the area leftover from an inscribed circle called
1
What is the English translation of the German “Grundbereich” and/or “Träger”?
0
Placing circles along the edge of a larger circle
1
Find direction of tangent vector based on trajectory along circle
0
Move a circle along the circumference of another circle
2
If a circle with another circle cut out is called a washer, what's the spherical equivalent called?
1
Are there different words for a circle, and the edge of a circle, which are topologically distinct?